I know I'm going to jinx it by saying this - but Vermonters have been so lucky over the last three weekends - being blessed with absolutely gorgeous weather. Yesterday seemed to be perfect for the Vermont City Marathon. The sun was out, but the humidity wasn't.

Rachel and I met up before the 8:00 start. She ran the first half of the marathon, and I ran the second. I got to cheer for her as she came off of Church Street the first time around, then made my way to the buses that would drop us off at Oakledge.

I made it just in the nick of time too! I didn't wait too long before Rachel came running in, finishing around a 1:37 for her half. Pretty sweet!

All morning my stomach was feeling funky, and unfortunately I had a few cramps at the start. One of them got so bad that I walked around mile 4 for a few seconds. Those seconds were all I needed to relax my body and get rid of the cramp. Burlington has been the only place that has plagued me with cramps. I really don't do anything different there than I do any other day, so I'm either putting too much pressure on myself (causing me to tense up), or my straight out and backs don't prepare my body for all of the turns that take place on the course. The only other time I had to stop was to tie my shoe around mile 10. It's the first time that I can think of that I've had to do that mid race. Ugh! 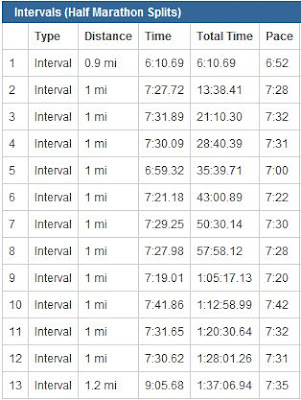 As you can see from above, my splits seemed to be a little bonkers. I actually don't know my official time because every time I stopped I automatically stopped my watch and then restarted it. So miles 4 and 10 could be a few seconds slower than what is noted above. I am assuming that my time was a 1:37:XX because our final net time was 3:14:40 (gun time was 3:14:49).

Random Thought I had during the Race: Hunger Games. I read the second book last week and started the third on Saturday so it must have still been on my mind. There was one point in the race when I started to connect what I was doing (running) to what the Tributes did in the Hunger Games.

Another Random Happening:  I am very curious to know who the announcer was at the finish. As I was approaching the finish line he announced our team name (Kickin' Asphalt) but said that I was from Milton, where I grew up, not where I reside. I know that I did not write Milton when I registered. So whoever it was knows who I am!

You're going to love my dorky-ness in the photo below (chocolate milk in left hand and bag tag at the shoulder). You would think that if I ask for a photo to be taken that I would at least make it a better one... 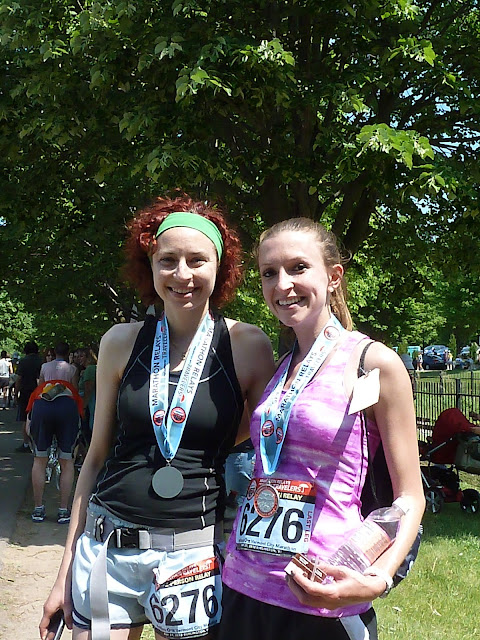 Rachel and I were super excited to get our hands on the free Ben & Jerry's ice cream at the food tent. I've got to say that Burlington has some of the best food for finishers out of all of the races I have run. Boston was slacking this year (who wants dinner rolls?!). There was even Leonardo's pizza yesterday, although I have to admit that it did not look as appetizing as I had hoped. Even though I normally can't get enough chocolate and cheese, I prefer to stay away from those things after a run. 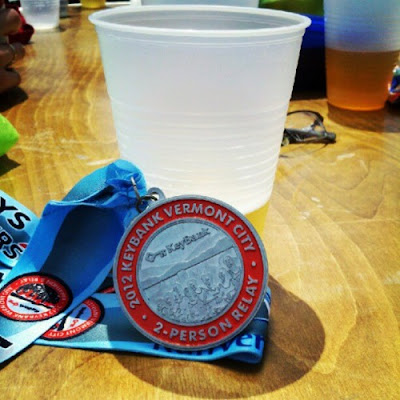 We hit up the beer tent for our free pint, and enjoyed the sun for a while. I departed Rachel and her friends to head to another friend's house for the annual post-marathon BBQ. SO much fun!! I look forward to this weekend every year: A weekend of running, friends, and a kickoff to the summer.
at 4:09 PM