I'm all set to run the second half of the KeyBank Vermont City Marathon tomorrow with Rachel, the same Rachel that ran Boston. Last night I picked up our race packets from the Expo. Talk about chaos.... I don't know how Boston is able to easily give out packets to 25,000 people yet there is such a mess at the VCM expo with only 7000 runners. The other let down of the expo? No Ben & Jerry's. Seriously, what. The. Heck. I was looking forward to it all day. They give it out every year, but I guess it was too much to have it at both the Expo AND the finish line.

I am always excited to peek into the bags to see what we get for goodies. This year wasn't bad. Actually, I think I like it a lot better than Boston's race packet this year (who thought of putting rice into Boston's bag?!) Some of the goodies included a gel shot, a Vermont magazine (that I haven't opened), an awesome sticker, and my favorite - the square of Lake Champlain Chocolate. I'm not sure how I feel about the new shirt design, but it does make it easier to wear it out in public and it seems super light. I suppose I'll have to get used to the absence of the VCM logo that is usually prominently displayed everywhere. 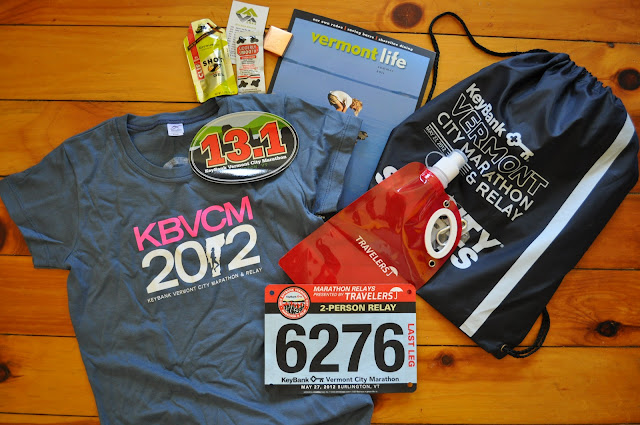 Tomorrow marks my third half marathon at the VCM. I did a relay team one year (with 4 other runners) and have run the full thing twice. I definitely think the half is my favorite, especially when coming off Boston. For one, I know I have the endurance to get me through it. It also feels easier because it is half the distance. The other nice thing about a half is that I can actually walk the next day!

I'll let you know how it goes. Hope you're all enjoying your Memorial Day weekend. The weather in VT is perfect!!
at 3:47 PM