Pump It Up 5 Miler Race Recap

This past Saturday marked my return to racing when I decided last minute (on Thursday) to jump into the Pump It Up 5 Miler. I have done no speed training and I am truly lucky if I get out for 5 runs a week. Some days those runs are only 3 miles, but I am OK with that because hanging out with Ella is usually much more fun than going for a run.

Speaking of Ella, I was supposed to race a half marathon last month but Ella came down with a stomach virus (that I also came down with two days later) and we were up all night. I couldn't justify leaving her that morning and didn't run it. It seems baby sickness is becoming a prerequisite before races as Ella came down with a cold Friday and did not sleep well that night. Thankfully, Tom was awesome and was able to stay home with her that morning even though they (or he) wanted to be out there to see me run.

Pre-Race:
The race was held in town. I debated about running to the start as my warm-up but decided to drive. It was a gorgeous, sunny morning with temps in the 50s. I felt light and more like my old racing self during warm-up and thankfully got in line for the one port-a-potty early so I could continue with some drills and strides after.

I didn't have a plan for the race except to run at a faster pace than I have been. Tom and I are doing the VCM 2 person relay at the end of the month and I wanted to get in some faster runs to somewhat prepare for that race. I had some goals in mind for Saturday, but only in my mind. I didn't know how feasible the first two were:  Plan A (dream plan): Run 34-35 minutes, Plan B: Break 37, and Plan C: just hit 40 - an 8:00/mile pace. I just had no clue what my body could do. I had only run 2 miles at a tempo pace (faster than 7:10) so this was going to be an adventure.

Race:
There were 85 runners and my plan at the start was to go out easy and at my own pace, then work into the race, hopefully finishing faster in the second half. It was an out and back on a dirt road, so we would see everyone in front and behind us. Interestingly, women did not line up in front of me, even though I was standing back from the start. Once the race started I ended up leading the women for a few minutes. I tried to keep a relaxed pace but felt pressure knowing that I had women right behind me. Finally they got the hint and took the lead and I stayed tucked behind the third place woman, now happy with the pace I was running.

I was surprised to see how easily that 6:47 came for the first mile, but wasn't surprised at the time knowing I had run faster at the start. The second mile was more challenging as we entered the "rolling hills" portion of the race. The distance between the 2nd and 3rd place and me widened a little.

In the third mile I began to catch up again to the 3rd place woman. I felt bad when she stopped at the turnaround to fix her shoe. Unfortunately, that must have offset her pace and shortly after that I passed her. At that point, my old racing self would have focused my eyes on the back of the 2nd place woman and made her my goal to pass. It was different this time: I had now reached the point where I had not run that fast for that long in about a year. I didn't know what was going to happen, so I didn't push it. I wasn't running an easy pace but I knew I was far off from my top speed.

I had a few moments on Saturday when I began to feel tired only to realize that that feeling was NOTHING like what tired and the pain of childbirth was like. And while I'm on that topic - I never got to use the relaxed breathing techniques that I learned in my Hypnosis for Birth classes during Ella's actual birth because she came too darn quick for me to calm down enough to think. However, I am now putting those strategies to use while running and made sure to relax muscles that didn't need to be tightened and to take controlled deep breaths while running on Saturday. It really does wonders when I focus on these actions in the race and can regroup my thoughts and running.

The last two miles flew by. I just kept thinking how amazing it was to be out there, how lucky I was that the weather was perfect, how my body seemed to be doing great with no speed training, and I began to feel optimistic for what the next few months of running could be like. 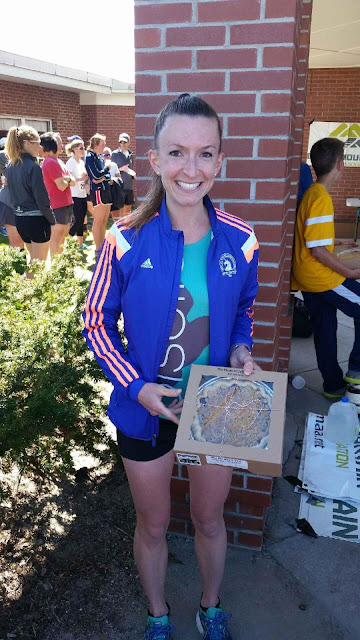 Since I didn't approach this as a real race, I didn't put forth a truly hard effort. I finished and wasn't tired and know that I have so much more in the tank to give. The race served its purpose. It gave me more confidence in my abilities and now I believe that my body is ready for faster paces and more regular running.

The last two weeks have really shifted my mind frame for running. Two weeks ago I had a New Mom Consult at Evolution PT because my body felt so off while running. While I could go into more details, the brief is that my right glute is weak, causing pain in my right quad. I also found out that my ab separation is closed, so I have resumed some modified core-work. All of this is good news as I am no longer afraid of damaging my body and I have exercises to do to make it stronger. This race also showed that my body is capable of handling more. I have resumed running very cautiously, and perhaps more so than I needed  to, but I fully believe that it is better to be safe rather than sorry when starting to run after 4 months off and a child birth thrown in there.

Thoughts
I really enjoyed the race and will certainly want to keep doing this one in future years. I didn't mind the out and back and there was enough food at the finish to refuel before awards. The smaller race size (compared to DC) was relaxing and more fun. Oh - and the awards weren't bad either: I had to choose between Snowflake Chocolates or Poorhouse Pies, and while chocolate is almost always a no-brainer, the pies seemed to have quite a reputation.

And folks - Poorhouse Pies are amazing. I haven't been to their self-service pie shed yet but I seriously would have no problem going there once a week for a pie this summer to try them all. I picked the blueberry pie with streusel topping and wanted to eat the entire thing myself in one sitting.
at 8:26 AM