Before I go anywhere with this post I'd like to say that yesterday I was totally excited to hear that Meb and Kara will be running NYC this fall! And then reality hit - I'm never going to see them. Tom's probably going to see each of them 5 times as a spectator, and I don't see them once. Their times totally crush my marathon times - so unless I somehow, miraculous run into them at port-a-potties at the start, it ain't going to happen.

Who am I kidding, elites don't use port-a-potties. So my chances of seeing them equal 0.01%. 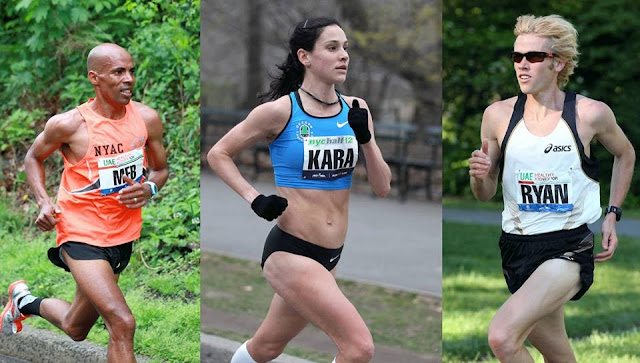 The first thought out of my head when the alarm went off yesterday was "****, I really wish I was still on the UVM cross country team." I had a track workout scheduled and no motivation to do it. I needed the girls to get my butt into gear. It is much easier to do a workout when you have your friends around you going through the same thing and pushing you to finish. It is 1000x harder to do a speed workout on your own. 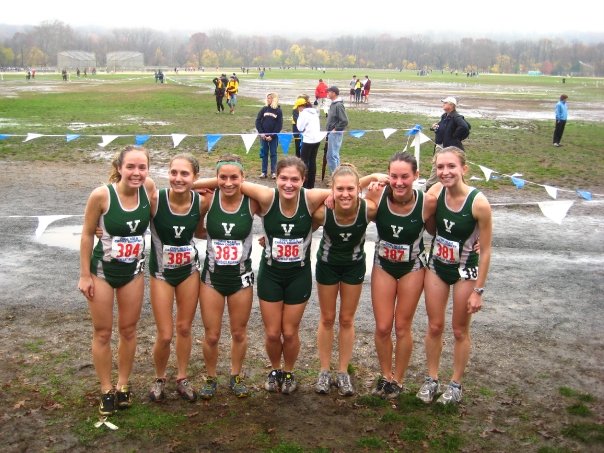 I finally pulled myself out of bed 10 minutes later, got out the door and started running.

Here's the thing - I shouldn't have not ever felt that great on the Tuesday workout of the Hanson Marathon plan. I am normally dying. My warm-up is necessary because my legs are still and sore and tired from 6 days of running and they are barely moving. My mind is usually trying to convince me I am crazy because I'm about to go do speed on a track and that it would be best to just turn around and go home.

But not yesterday. If my legs could talk, they'd be all giddy - excited to be going for speed. They felt strong.

What is going on?

I have two theories:

I'm pretty close as it is already. I wouldn't have to give up much, but I would have to add in way more fruits and veggies. I even toyed with the idea of becoming a vegan after watching Forks over Knives and a bunch of the videos on Thrive Forward. However, I know I am not ready to go that far, and that it would be best to make small changes, rather than one giant change to my diet. That would be giving up a lot. I mean, this whole blog was originally focused on dessert for crying out loud! Yet, in the last 4 years, I have changed a lot. My goals have changed. I am more aware of what nutrition does to health and sports performance.

I need to refuel properly in order to train at my maximum. I have been having awesome smoothies over the last few weeks after a run in order to increase my daily amount of fruit. I've pretty much doubled my fruit/veggie intake from before - but I'll admit, it wasn't high to begin with. I've switched to bakery-baked bread instead of the packaged bread to eliminate the extra stuff that shouldn't exist in bread.

I was once told that if you take out something from your life or try to break a habit, you have to replace it with something else. Instead of coffee, I'm drinking tea. Instead of a cookie, I reached for a peach on Monday. Instead of candy, I'm now reaching for a date in the afternoon. The wonderful cashier at Yes Market even exclaimed "Ah! Nature's candy!" when I bought some dates a few weeks back. It makes so much sense. Nature has provided us with the fuel we need, so why are we, humans, creating our own or relying on sugar and caffeine to keep us going. It's startling to think that humans consume over 150 lbs of it a year.

So over the next few weeks I'll continue to work on my diet. I worry about what will happen once school begins. It will be easy for me to want to reach for coffee in the morning but I have to tell myself that two years ago I didn't drink it. I don't need it. I just need more fruits and veggies.

And over the next few weeks I'll make up rules like:
So why am I doing this? A big reason is for health and for a more energized feeling. By the end of the school year I was hooked on sugar and caffeine and feeling more tired and even sick. My runs were sluggish. Yesterday's run was reason enough to keep going with the healthy eats. I know I won't feel that good every day, but if I can do a 9+ mile track workout and still feel just as awesome later in the evening to jog a few miles, then I don't want to stop it.

I know I will fail and give in every now and then (or more than I expect to) but I can only try. And don't worry, I am sure I will not be able to stay away from desserts completely - you will still see them on this blog, as well as any future cakes that I bake.
at 9:47 AM