Last week PR Running posted about their Birthday Bash 5K on Facebook. The stores are celebrating 10 years of business and just opened a new store in Fairfax, VA. To celebrate, they were holding a 5K and inviting along sponsors to offer activities, food, and music for the 5K participants. Essentially, they were hosting one big birthday bash!

Somehow I was itching to run a 5K. I also like birthday parties. This seemed like a great race to sign up for and I didn't even have to bribe Tom into doing it with me. He was all for it!

We picked up our bibs on Saturday because I was bored. Tom opted for a $10 gift certificate to the running store and I opted for their vintage t-shirt. It's light weight and seems like it'll be a comfy-lounge-around kind of shirt.

We explored the area nearby and stopped at Potbelly's for lunch. The inner grandma in me got a tuna melt for lunch. I have a coworker (who may be reading, sorry J!) who would walk away from me if I ordered this sandwich. But I swear these are my go-to pre-race lunch meals. I've had them the day before marathons and run awesome times the next day. So I decided to go with it this time around. For some reason I just love them!

The race was set to start at 8:00 am on Sunday. Without the traffic we were able to make it there in 30 minutes, use the bathrooms, and do a 2 mile warm up and drills and strides. Does anyone else do drills and strides before races? I swear by them. The idea behind them makes so much sense to me and they allow me to get my legs going! 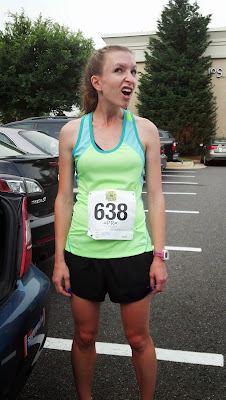 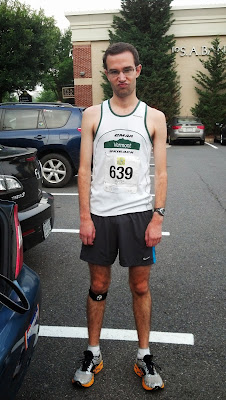 That pretty much sums up our thoughts pre-race :)

Lining up is always a tough decision for me. I want to be near the front, but not AT the front. I always try to spot my competition but in reality I know absolutely nothing about runners down here. In Vermont I almost always had some idea of who I should be near.

There were a lot of ladies that looks FAST that morning. They had the typical runner's body or they were sporting racing singlets from running groups they're part of. I seriously thought I was going to be blown away and they'd fly past me in the fist mile. So I listened around me at their conversations, to try to get an idea. I heard one woman give another woman a compliment, saying "Oh, you're fast! I've seen you before". That was good to know. I also heard another woman in front of me say "I've never run faster than a 23:00". That's when I scooted up a few rows. I wanted a clean start and did not want to have to run around people.

What did I learn from lining up at this start? 1) Just like books, don't judge runners by their cover and 2) Don't be afraid to be up there. And by up there, like the second row. I actually do belong there even if I think I don't.


It was a cloudy but humid morning. The gun went off and we were out. Immediately I spotted the woman in the black sports bra that had received the compliment earlier. She was in front with another woman in red. Right in front of me was a younger blonde, who ended up being pretty young (16-20 y/o age group). I stayed with the blonde while the other women pulled slightly ahead.

I was OK with that. And surprised by how easy it felt. But I knew the worse was to come.

At this point in the race we had been and were still going up a slight incline. I decided to pass the blonde and found myself in third place. Wait, was I really in third? I kept looking ahead for the other women, but there weren't others. I battled through the rest of the race with two other men. We kept switching on and off. I'd lead, they'd lead. They'd blow past me, I'd eventually catch up. On and on.

I went out too fast for the first mile. At this point I was thinking about how awesome it was to be more than half way done my race. How crazy it is to compare a 5k to a half marathon. The 5K was going by so fast!

I kept waiting for the fourth place woman to sneak up to me. I had no clue where she was and refused to look back. I wanted to finish third but was totally expecting to be beaten. The further along I got on the course, the harder I knew I had to work to maintain my spot. 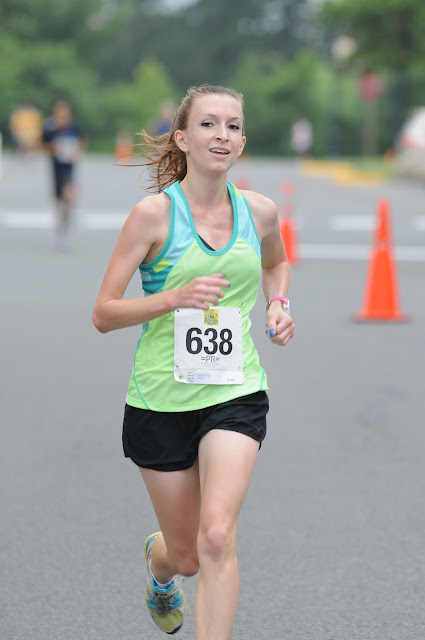 Around mile 2.5 my arms started to hurt. I don't even remember how my legs felt. I know I was breathing heavy because of the humidity, sweating a ton, and feeling those arms. I also started to get dizzy - probably thanks to the heat.  We made it past our last incline/hill and made our way back to the finish.

Those two men that I had been battling with definitely beat me. But I hung on to third for women and got it by a fair amount.

I wasn't near my PR and still didn't break 20 minutes, but I was happy with that time considering the amount time I took off this spring and the fact that I'm training for a marathon instead of a 5K. 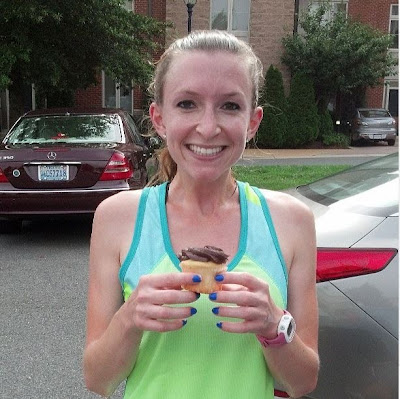 The post race celebrations were a lot of fun. We got free cupcakes. Now that's my kind of race! There was a ton of post-race runner food (bananas, granola bars, etc.) and Popsicles. A co-worker of mine was running the photo booth, Powerbar was giving away samples of their products, and the shoe companies were there (all but Asics - why Asics?!) to show off their shoes. 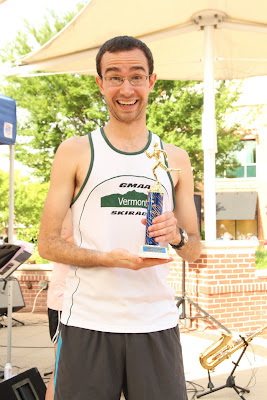 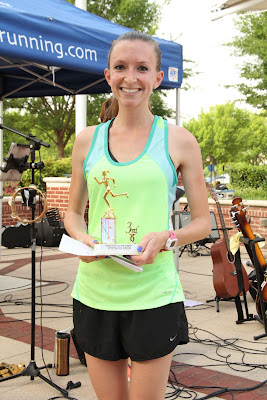 They had an award ceremony that I'll admit I was quieted excited for, because we were getting trophies! When do small races ever give out trophies? NEVER! Tom got one for being first in his age category (whoo-hoo!), and I got one for being third overall. His is bigger than mine - not fair! I kept complaining about that the whole time (#firstworldproblem). I also got a $50 gift certificate to PR Running which will be so helpful when I need a new pair of running shoes.

Overall, I'd say that this was a great race. They had plenty for the runners before and after. The only thing I could think of that could possibly be changed was that the microphone was not loud enough and I could not hear the woman who was doing the announcing throughout the event. Minor detail though. The course was a rolling loop and there were plenty of volunteers. The timing was easy (chip timing) and they even provide FREE race photos!

After all of this, I can say that I love PR Running even more!

While I'd love to do a few more 5Ks this summer and fall, I know I need to focus on marathon training. Too many races can compromise my ultimate goal, so I have to plan wisely!
at 11:29 AM