Last month a coworker told me about the Colchester Causeway 15k. Would you believe that I had never run the Causeway in all of the years I lived in Vermont, even during my time running for UVM? I was curious about the race, especially since I had never ran a 15k, but didn't sign up for it until the day before, on Friday. Lately, it seems that once I hear about a race I can't get it out of my head until I run it.

Tom volunteered to watch Ella and cheer, so our little family headed out that morning. I've been slacking on warm ups, barely running at all, and certainly not doing any drills. Saturday was no exception. I wasn't as excited to race that morning, unlike the last two races. It didn't seem like a race, just a long run with a lot of people. However, I did approach it a little differently. Unlike the last two races, I knew that I could get through 9 miles and because of this I had a finishing goal time in mind.

The start was interesting for me: I was up with the lead men as we ran around a dirt trail at Airport Park before heading onto the causeway. Perhaps if the VCM had not been the week before there would have been other runners there to push the pace, but for the first mile I was right there with the leaders. Lately when I wear the watch I turn it to face the ground so that I can't see it, but I had to check my pace because it felt too easy.  We were at a 7:00 pace so I stuck back with them until they finally started pulling away after the first mile.

Once we were on the Causeway it was a lot of the same ol' scenery. The morning was muggy and there was a fog in the air, so there wasn't too much to see except the open causeway ahead of me. This was probably the hardest part of the race, as the race was more of a mental challenge rather than a psychical one. All of the other ladies were behind me and there were a few men in front of me. I didn't feel like I had to push the pace, only maintain it.

We turned around at mile 5 on the out-and-back course which gave me an opportunity to take my mind off of the rocks and gravel and cheer on the runners heading out. I calculated that I had around 2 minutes on the next female and figured that I would need to just hold onto my current pace. I wasn't sure if she was going to try a negative-split technique, where she could run back faster than she ran out. I assumed she wasn't going for that and that maintaining my pace would be enough. 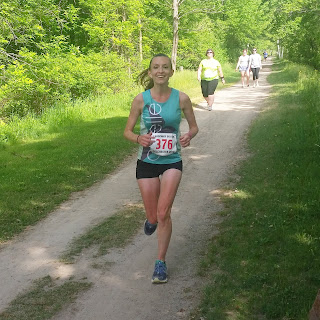 These were lonely miles as the 15k runners were now behind me, there were no spectators, and there was only one man ahead of me, far off in the distance. I was so lonesome that at one point I began to cheer for myself out loud. Anyone would think that I was crazy but I figured that since I was doing it in my head I might as well say it out loud to keep myself awake.

Around mile 8.8 I saw my little cheering section - Tom and Ella! She was awake this time, unlike the first time I passed them while heading out at the start. I also began to pass some of the folks that were heading in from the 5k that started just after us. 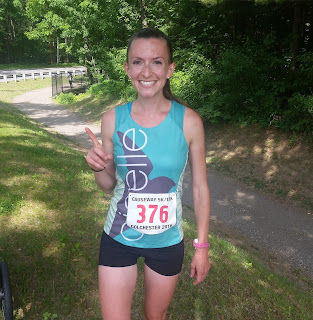 There were no awards at the finish, just food and socializing. My goal was to get around a 1:05, so I was content with the finish. It's interesting to think that in DC that was my 10 mile time. I know I haven't pushed myself anywhere near my max so the next race I run I will need to do it, to see what I'm capable of. I seem much more laid back about racing right now than I used to be, but plan to get in some actual speed work in now that I'm done teaching and will have time this summer.
at 9:13 AM