Oy! I totally forgot to post my half-recap from last month. School leaves me with few precious non-working minutes each day, so bear with me for the next month. Once coaching is finished I will have a few hours back to my day, although this whole not running thing is also giving me some more time. This weekend has been absolutely beautiful with the warm weather and it is taking every ounce of strength not to go out there and run.

Ok.... I did run for about 60 seconds yesterday (10 second intervals) to see if I could jog pain free. I could. But I didn't want to run any longer to do more damage.

Anyway, let's get on to the recap.


Parks Half Marathon - September 7th
The Race
I had heard great things about this race after a few co-workers did it last year. One of the biggest draws was the food. Apparently you are offered more than enough at the finish line. That was good enough motivation for Tom and I to sign up!

The race started at 7:00 am, which meant that we were parked and walking to the start area by 6:15. The morning was somewhat cool, but not cold enough to need a long sleeve. I have really enjoyed the warmer race starts down here compared to running in Vermont. It makes life a little easier. Lining up was a breeze. There were pacers throughout so I knew to be somewhat in front of the 1:30 group. My goal was to run a 1:30, but I had no intentions of sticking with the pace group. Me + talking during a race = disaster. I also hate being cheered for during a race. Sounds odd, but I like to get in my groove and stay there. Therefore, I wanted to be alone and away from distractions.

The gun went off and there was a mini incline to get out of the starting area before we were on a stretch of road. I listened for a few minutes while a bunch of older men bashed each other for a mile - clearly they were training buddies that wanted to give each other a hard time.

A few women passed me during the first mile, but I stayed true to my pace. I did not want to go out too fast and was hoping for around a 6:45.

After mile 2 I caught up with a man that refused to be passed by a woman (me). We played cat and mouse until mile 4, when a hill was too much for him. Advice: Sprinting early in a race to prevent being passed is a very bad idea, and that man learned it. 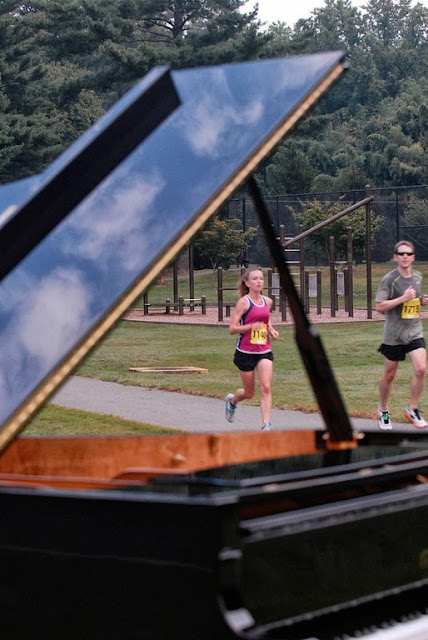 For the rest of the race my confidence grew. I felt fine and couldn't believe my splits. I was staying consistently under 7:00 minutes and felt great the whole time. I passed the 10k mark and was surprised at how easy it felt. The training I've been doing has set me up well for shorter distances.

I passed quite a few men during the second half of the race and caught up to some of those females that passed me during the first mile. My goal during this part was to go with whoever passed me, rather than let them run by. Sometimes I "fall asleep" while running, meaning that I get in a comfort zone and turn off my brain, so this was one way to keep my mind focused during the race.

The race course was absolutely beautiful. We ran on bike path for the entire way, in and out of neighborhoods, and with few spectators (my ideal race). The only hard part came around mile 11. We had an incline to go up and it was the most difficult thing for me. I say incline, because it really was not a hill. But the pace I had been going meant that my legs were more tired. 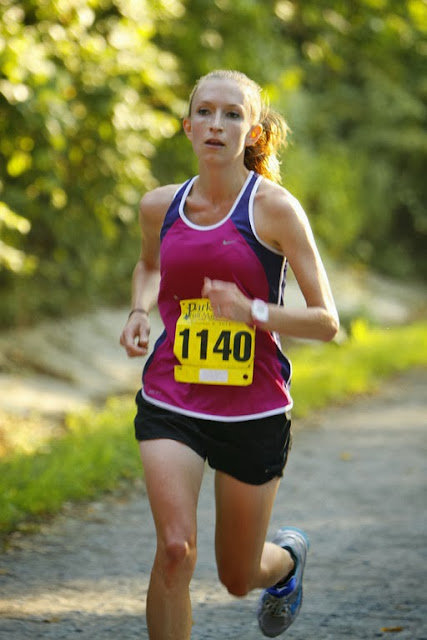 As the end crept closer and closer I knew I was going to get a PR but had no clue by how much. Every time I came to a straight away (the last mile) I challenged myself to pick up the pace. I didn't actually run faster splits, but I forced myself to work harder when my body was getting tired. 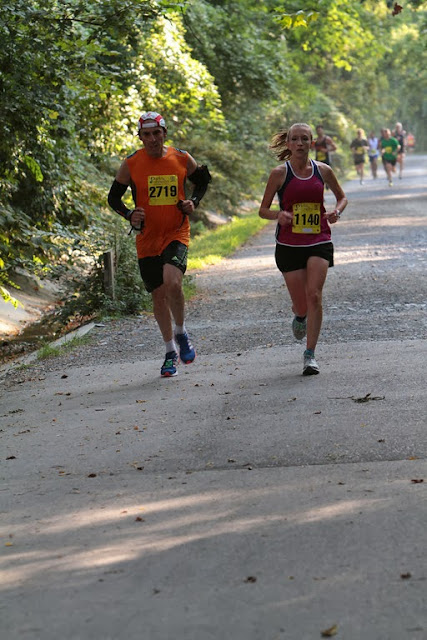 I never, in my wildest dreams, ever thought that I would run the pace I did and was really surprised to see the clock read 1:28:-- when I turned the last corner. I certainly had no plans to run that time, nor any expectations to do it. It is scary, yet awesome, to know that I had more in the tank, and that I could run a faster time. Yes, I was extremely sore the next day, but since I finished and was barely tired it only means that I have to push harder next time.

This race makes me rethink my training paces. Prior to my knee injury, it also made me reconsider my marathon goal time for NYC. I am also more curious about what it would be like to work with an actual coach. I have always loved running for the surprises it brings and for the challenges it gives us and am ready to see what more I have in me.

Tom got an official PR in the race as well! He used it as a tune-up race for his marathon in November. He hasn't done a lot of races, so it was helpful to do some this summer to get back into them. Can I just say that I'm always insanely jealous of his photos and his good form. :) 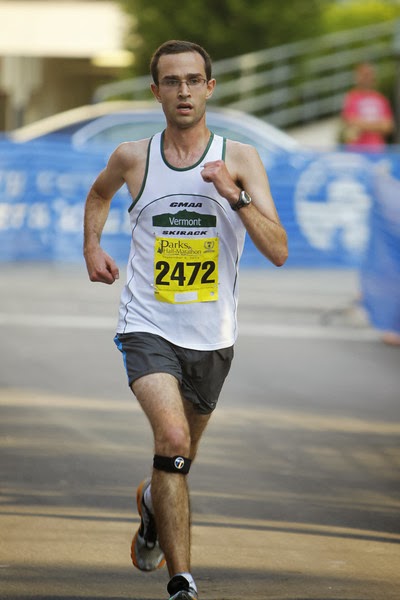