I apologize for how long it took for me to write about this!

I did it. I survived Boston. I have mixed emotions about the race. I am, of course, extremely happy that I was able to finish on my own and that I only walked a total of 20 seconds throughout the race. Not bad. But a little part of me is sad that I trained so well this year and had no chance of getting a PR.

Below is my recap of the race. It's going to be long. So if you're one of those who would rather look at the photos and skim the text, I'll let you know in advance that I finished in 3:42:03.

Saturday:
Tom and I headed down to Boston with Rachel, who I've been running with this year. We arrived at our hotel around 6:00pm, dropped off our things, and headed into the city to meet up with our high school friends, Kelley and Sean, for dinner. It was so awesome to see them again. We went back to the hotel after and headed to bed.

Sunday:
The three of us headed out for a 2 mile shake-out run. On the way back I picked up two bottles of chocolate milk and some Reese's for the pre-race meal. Oddly, I did not crave chocolate during this trip, and couldn't even finish ONE Reese's when I tried to eat them. What happened to me? 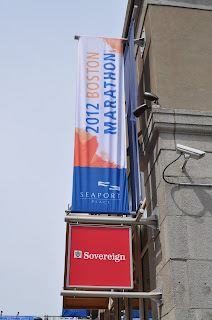 After showering, we headed into the city. By the time we got there we were hungry for lunch. We stopped at the Whiskey Priest restaurant near the Expo. BAD IDEA! That was definitely the worst restaurant experience I've ever had. I'll save you the details.

When we finally finished our meal we headed into the expo. I didn't buy anything except for GU, however, I did munch on a lot of the gummy blocks from different vendors. Tom and I decided that the Powerbar gummies were THE BEST!! They were like candy.

The best part of the expo? Seeing our friend Colin, from college, who was working at the Brooks section. I'm pretty sure seeing the excitement of his face when he saw us was the highlight of the whole weekend.

After the expo we headed back to the hotel. Prior to our trip down I had decided that the only thing I wanted to do (besides race) was to eat a cupcake. So we stopped at a cupcake van, but I didn't buy one. I simply did not want a cupcake. What the heck was wrong with me?!

We ate dinner at the hotel that night, and one of Tom's friends from his semester at American University met us there. I had rigatoni with spinach, tomatoes, and sausage in a "rosette cream sauce". It wasn't bad. Rachel and I returned to our room at 8:30 to pack and hit the hay. 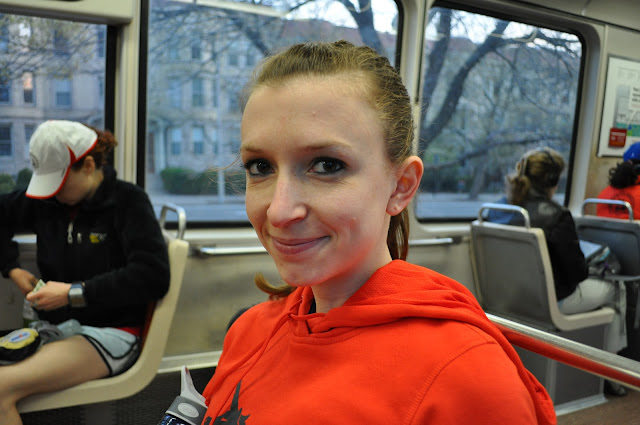 We were up at 5:00am and our of the hotel around 5:30. Fortunately, Colin let us park at his store in Boston so we could hop on a quick train ride and get to the Boston buses. 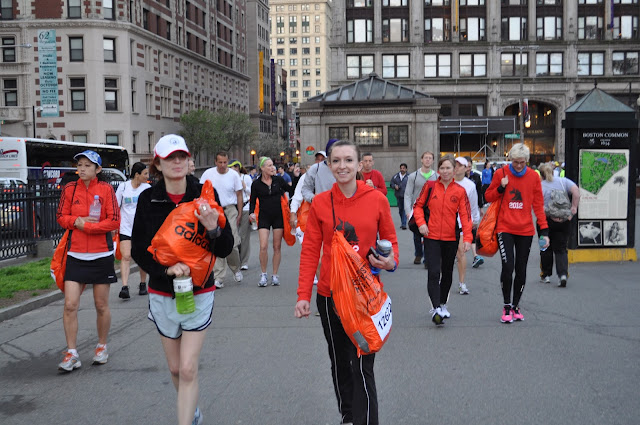 There was quite the crowd waiting to board the buses, and just a tad too-few port-a-potties. 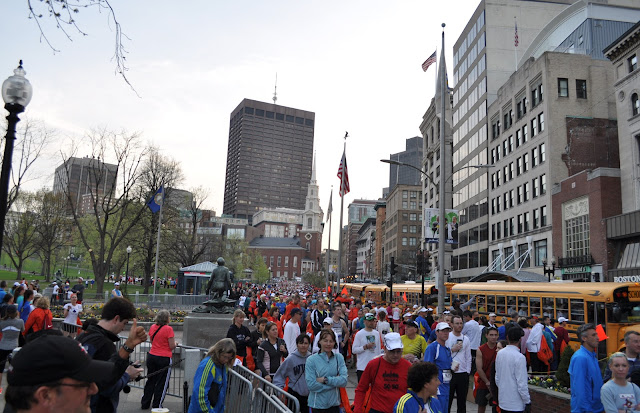 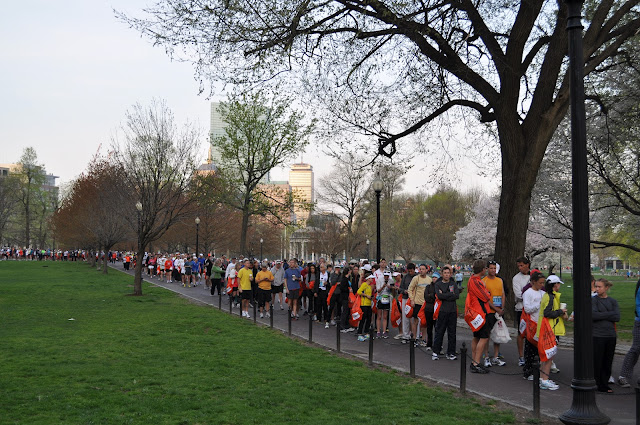 We got to Athlete Village in Hopkington around 8, grabbed some food, and camped out until we were able to drop our bags and head to the start. 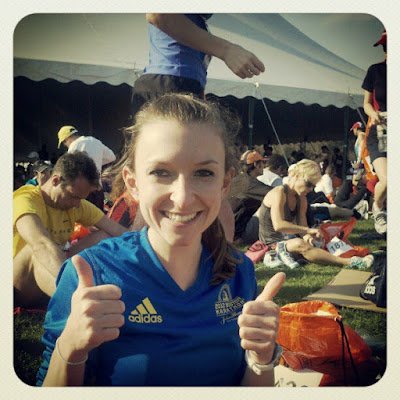 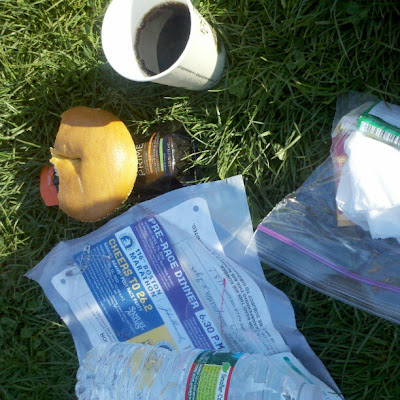 We were already sweating before we got to the start, which I barely made. I don't know what happened this year but it was definitely too congested at the bag drop off area. I literally had to run to the start and made it with just 30 seconds to spare (the announcer gave a 30 second warning). I saw the awesomeness of runners, as they all passed around someone's sunblock to help each other out. Little did they know that it would be washed away about 20 minutes later. 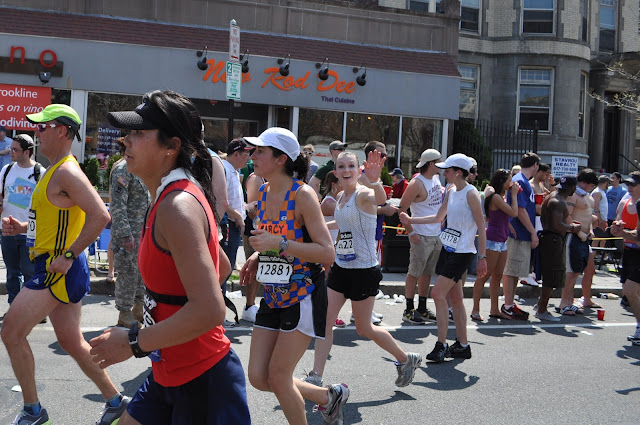 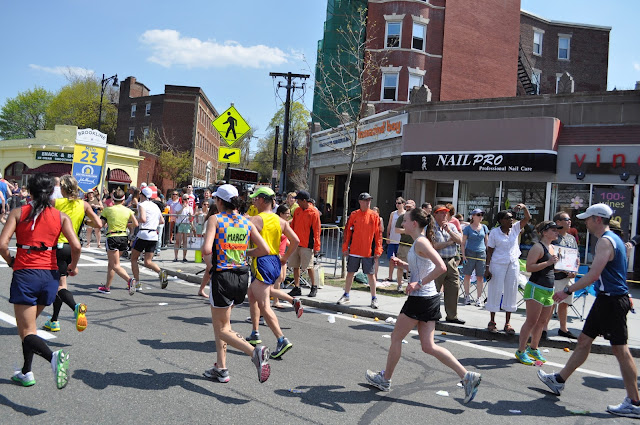 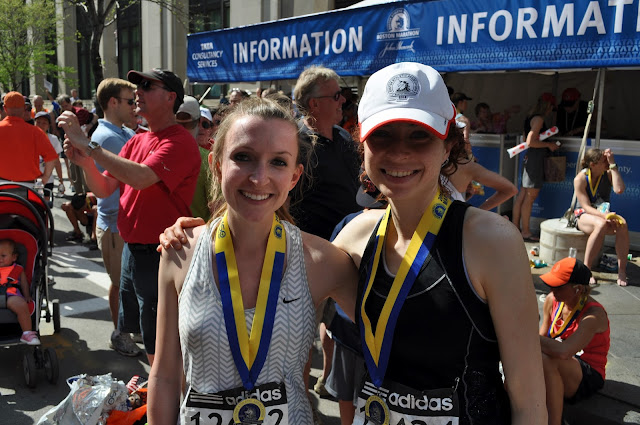 I wish I could send a thank you note to all of the spectators of Boston. It was awesome to see how many people were out there supporting the runners. I cannot tell you how many people had oranges and popsicles for the runners, who must have been holding their sprinklers and hoses up for us for hours, and who were running back and forth to fill up their water cups so we could stay hydrated. It was really awesome to see college students at mile 24 filling up cups right outside their apartment. THANK YOU! That ice cold water was greatly appreciated!

I also want to thank YOU! All of you who gave me support and advice along the way. I cannot tell you how much that helped during training and during the race. Thank you!

It is now Friday morning and my legs feel like they're back to normal. I had two days of hobbling, or what I call, "Pirate-leg Syndrome" (I felt like a pirate with a wooden leg any time I walked down stairs). Yesterday, I went for a 35 minute walk around town since I wasn't able to run. The week after the marathon is so hard for me: I'm always more pumped to get out and train, yet I have to rest to let my body recover.

Unfortunately, I did not re-qualify for Boston. I thought I was too far off with my splits to make it my goal in the race. So the next decision: summer marathon or take a break from the Boston running....
at 8:13 AM