Taper week #2... but I'm afraid I still had too much mileage

Monday: 8 miles at 7:42 pace
We have a problem. I am supposed to be tapering but I am running at marathon pace. Aw crap. This was the day of never-ending running. I ran a little bit at practice, but my legs felt so heavy. I ran a few more miles when I got home to bring the daily total up to 7 miles. I was happy with that. What I wasn't quite so happy with was finding out that we needed mozzarella in order to finish making the chicken Parmesan we started for dinner. Out I went to get the cheese at the store, tacking on another mile for the day. It's great that I can run to the store, but not so great when I am trying hard not to run too much mileage.

Wednesday: 6 miles at 8:02 pace.
We ran to the White House at practice today! I get so excited whenever I go near the WH, but the kids are so used to it that they don't know why we even bothered to go. They don't realize that people come to DC specifically to see the WH. It is so funny what people take advantage of when they live in an area for a period of time.

I did 3 more miles when I got home in order to bring up the daily total to 6. Afterwards, Tom and I headed to an Indian restaurant down the road for a unique mid-week date night!

Thursday: 5.3 miles at 7:32
I really did want to run slow today but I am weak when it comes to self control. A girl passed me at one point and I battled with my desire to run with her and pass her again. I hate it when people pass me, but I also know that I can't race every day of training, especially now, during a taper period! I kept reminding myself to "slow down. She's not racing in a week and a half like you are". I slowed a tiny bit, but was saved when she turned onto a street while I kept going.

Friday: 5.1 miles at 8:15 pace
There was a moment on this run when the sunset was to my back. All around me I started to see things glow red and orange. The trees at this particular spot on my run were of magnificent fall colors, and the red glow of the sunset seemed to set everything on fire. It lasted for about 1.5 minutes, before the sun fell below the horizon and the world began to grow darker with the approaching nightfall. It was such a neat experience!

Other than nature's awesome spectacle, my right leg felt really off. I spoke a few weeks ago about my hamstring problem, which was somewhat there, but I also felt something weird in my quad. This was the same leg that was missing a chunk of knee thanks to my fall two weeks ago. Anyway, I have hit the scab on my knee so much this week that it is healing at a snail's pace. One of those hits was so painful, and just so, that my upper leg cramped up immediately. Perhaps I had hit a nerve? The quad hasn't quite been the same since then, and I could feel it on this run. I became a little worried about the final runs scheduled for this weekend, and decided to turn back home and finish the run slower.

Saturday: 8 miles at 7:50 pace
I spent the morning at the DC AID's Walk/5k run, where most of the kids on our team got PRs! It was such a nice day that I couldn't let myself pass it by (especially knowing that we're in for rain over the next few days). I went for a run when I got home, choosing to go through Rock Creek. There were leaves EVERYWHERE! It was if fall decided to come overnight and every tree dropped their leaves at once. It was fun to be running through inches of leaves along the way!

Sandy's rain hasn't reached us yet, so I was able to run down to watch the Marine Corps Marathon on the Mall. I went down to cheer on the woman I coach with and was hoping to spot Kayla as well, but didn't get to see her. My first viewing spot was around mile 17. After waiting and waiting I figured I missed both of the women. So I went a little ways over to mile 19 and waited some more to spot them. Once again, I feared that I had missed them, and turned around to head to the metro. For some reason, I looked back at the route, and with some crazy luck, spotted M, the coach, immediately!!! It was so awesome to be able to cheer her on!! She looked terrific out there!

On a side note, I thought it was hilarious that a duck-boat was leading the race. Why???? Below are some photos of the leaders around mile 17. 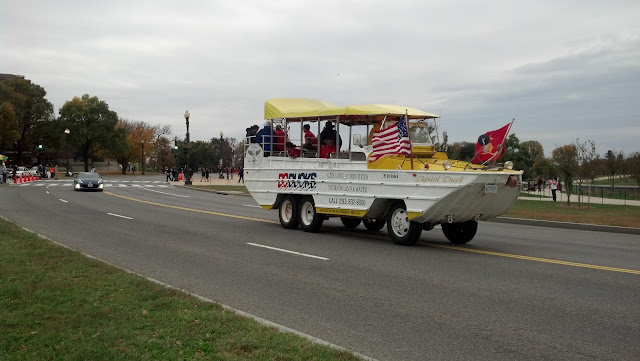 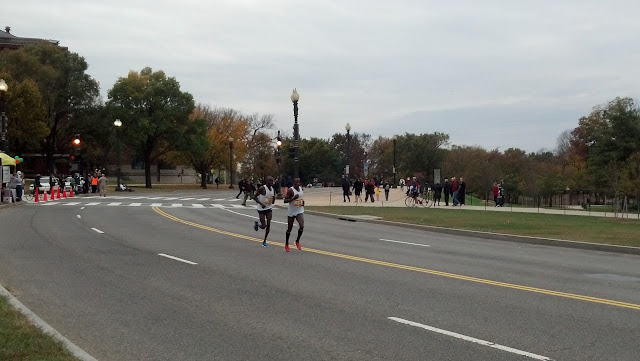 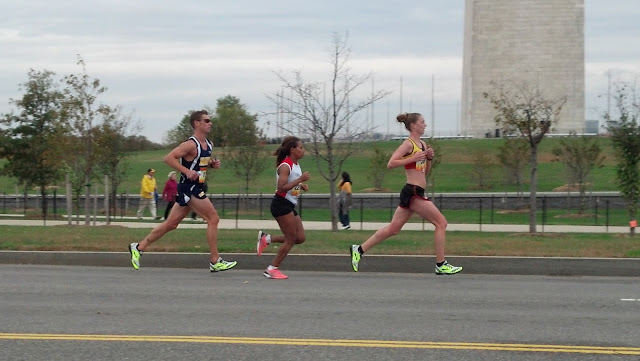 By that point, I had been shivering for a good hour and needed warmth. Instead of running home I took the metro. I made it home, drank some coffee to warm up, ate some left-over Chipotle burrito to fuel my tummy, then went out for another 4 miles to get my daily mileage total up!

Alright. I did it. I ran too many miles for the week. I mean, I followed the plan, and actually ran less than it called for, but I still ran more miles than I ever have at this point in my marathon-taper period. Part of me really wanted to follow the plan exactly, but part of me was afraid to. I anticipate having to take tomorrow and possibly Tuesday off due to the storm, but am OK with that! My legs need the break, and I have a lot of end-of-the-quarter comments to write on my students.