Back in the middle of May, a bunch of teachers from my school, parents, and students partook in the Capitol Hill Classic which consisted of a 10k and a 3k race. I had a major goal for this race and was confident that I could do it: Break 40:00 in the 10k. Better yet - break 39:00. I knew I could do this, but had not had good training after Boston (hello 14 hour work days!). I was also very stupid in the middle of the race and never actually looked at my overall time on my watch to see how I was doing. Lesson learned. 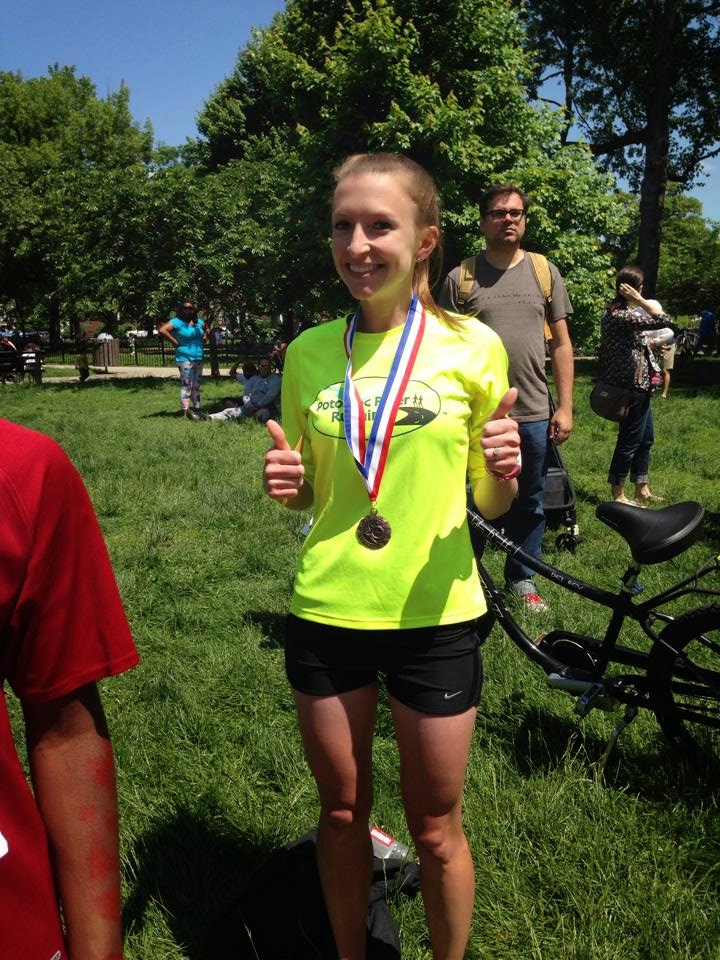 The race morning was PERFECT.  It was in the 50's, sunny, and had no humidity. There was a breeze that felt great on the course, but was enough to force me to draft behind guys a few times. The 8:30 start let us sleep in and enjoy the morning a little before racing, and nutritionally I was set for the race because of the later start.

Tom and I were both running and we knew we had a good chance of placing based off of last year's results. The gun went off and 3 women immediately flew past me. One, a red-head, was a girl I remember seeing at the Cherry Blossom in April. I had some sort of feeling/memory of passing her during that race, so I was not worried about her speeding off at the start. My thinking: let her get tired, then I can reel her in.

The start took us by the Capitol and Supreme Court. I just love the races in DC because of the monuments we run by!

The first three miles flew by but my Garmin beeped about 0.1 to 0.2 miles before I actually got to the mile markers. I don't know why it wasn't lined up with the markers, but I should have really taken that into account for the rest of the race and checked my watch a few more times.

I felt confident and satisfied with those mileage times. I was also surprised to see 19:07 when I went through the 5K. My current, official PR in the 5K was a 19:41, which means I knocked off a significant chunk and need to get into an actual 5K in the coming weeks.

By mile 3 we were in the middle of nowhere, or so it felt. The beautiful homes, green streets, and shade that we had in the first half of the race was replaced with concrete, sun, and the parking lot surrounding the old stadium in DC. It felt like a desert, because we were the only ones out there.

As I was thinking how horrible of a place it was, a girl in purple FLEW by me. Where did she come from?! Her speed told me that she knew what she was doing and I was not going to catch her. I fell from 4th to 5th.

I knew I had slowed. But by that much?! Fortunately, I spotted the red-head in red. My mission became to catch her, and I was getting close. I got her before the 5th mile, and felt confident that my race to get her meant I picked up the pace.

Oh no! This was not going the way I wanted it to, but I didn't dwell too hard on it. I actually felt fine and I was working at a hard effort. I had to keep reminding myself that it was only my 2nd 10k and I hadn't run one this fast before.

Now that I was in 4th I began getting closer to the 3rd place woman. At the same time, I kept playing cat and mouse with a man near me. It was good, as we kept pushing each other to get closer to this girl.

At around 5.5 I had a decision to make. I had never taken on someone like this in a race. I could keep going this speed and pass this 3rd place woman, and then hold on for the rest of the race. Or, I could play it safe, draft off of her, and then hopefully take her at the end. She knew I was coming, and I couldn't tell if she'd let me pass, only to pass me again and squash my mental game. Also, passing her would mean that I'd have to be on my game for the rest of the race, pushing myself to ensure she couldn't come back. Did I really want to do that?

Yes. I did. I wanted a PR. I knew that to get the PR I needed to get around her. If it had been a man I would have had no problem in my mind making this decision. He wouldn't have stood out. But to take the 3rd place female spot, scared me. I knew it. So I took her. And I kept running. I didn't want to look back. I also felt like I was going to vomit - a reaction that I need to control if I want to get faster.

My spring motto that I have to remind myself in each race: Running fast isn't easy. You have to work for fast times.

Tom was around mile 6 cheering on runners, having already finished 10th overall. I knew I was close to the end, but hadn't look at my watch time and didn't realize HOW CLOSE I WAS to breaking 40. When I turned the very last corner and saw 39:57 on the official clock I screamed in my mind. OMG.... how could I be that oblivious to the time? How could I have been that close to a 39:xx and not realize it?!

I passed the line at 40:05. It was a minute and a half PR, but didn't feel great because I knew I can do better.

We stayed to watch the 3K, which had a ton of our students running in it. I didn't realize how big of an event this was. It raised over $80,000 for a school in DC! Talk about a successful fundraiser!

It was a good race (minus the desert) and was a fun morning to spend with co-workers and students. This race also showed me that I need to get signed up for a 5K soon so I can really see what I have in me for that distance!