Ahh yaye! I raced today and didn't die! In fact, I ran faster than I thought or planned to. 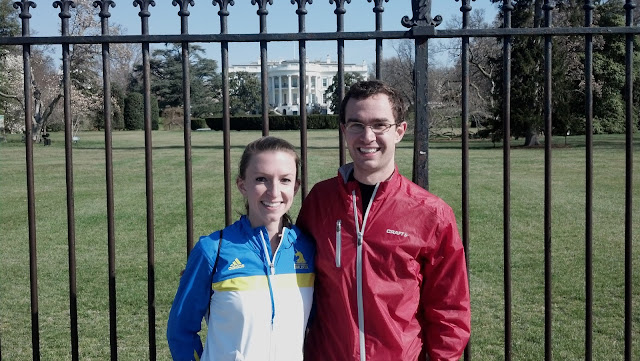 I could not sleep at all last night and it wasn't because of the race. We had watched last week's episode of Scandal and my mind would not let it go. Gah! Why does that show make me lose so much sleep? I would almost be asleep and then somehow my mind would start wondering about what had happened and I'd be awake again. I lost about 2.5 hours from 1:30-4:00 am because of that show. Needless to say, I was a little tired when the alarm rang at 5:10.

By 6:10 we were out the door and heading to the metro. We made it to the Washington Monument start by 6:40, and were able to meet up with Tom's team (his co-workers) before heading to our corrals. Tom and I were each in the first wave and had a great starting point. It was really weird to be so close to so many fast runners. I felt a little out of place knowing that my training has been pretty non-existent over the last few months.

I must admit that I was worried about running all week. I've had foot pain in my right foot since Monday. Back in 2006 I had to do a few weeks of pool running due to pain in this foot. The athletic trainer was afraid I was on my way to a stress fracture. I couldn't tell if what I was experiencing this week was bone, muscle, or ligament pain, but I didn't want to make it worse. On Wednesday it got pretty bad so I took Thursday and Friday off to ice and rest. I ran 20 minutes on Saturday and iced some more. The foot hurt a tiny bit early this morning, but thankfully didn't hurt at all during today's race. 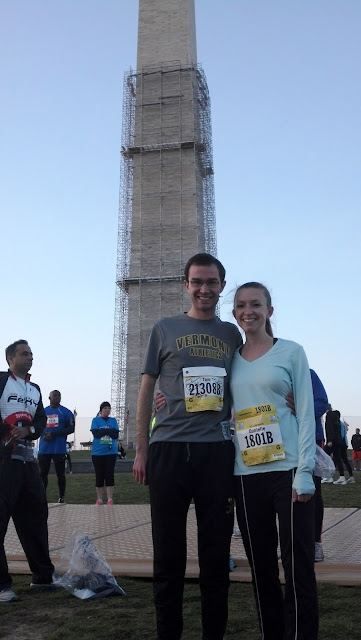 The Race
It was windy and 44 degrees at the start. We (Tom and I) debated what to wear and ultimately I went with shorts and a long sleeve. I was good for the first 2 miles, but I did get warm after. I rolled up the sleeves and was fine for the rest of the race.

My body got into a groove and didn't leave it too much during the race. I was worried when I saw my first mile split and had flashbacks to half marathons and marathons that have started out that fast and then bonked at the end. Miles 2 and 3 came by and I was not too far off from the starting pace.

If that's what my body wanted, I went with it. I told myself not to be a baby anymore. If I want to improve in running I need to go for speed and not be afraid. Every time I tried to slow down a little bit I ended up running faster. Not sure how, but it happened.

Miles 6 and 7 were tough. We headed out to Hains Point, a little island, and were struck with head on wind that did not let up the entire way. Unfortunately the crowd was thinning out and I found myself running alone for most of it. Around mile 7 one of Tom's coworkers passed me and then the 7:00 mile tempo group came along. I was able to scoot in behind them and draft for a few minutes, giving me a slight break from the wind.

It was a relief when we started heading back to the start at mile 7.5. I didn't take any water along the way, but once I passed the last water station at mile 8 I think I started to freak myself out. I started to get dizzy, but was able to recover. I talked myself out of whatever I was thinking and got back into the game.

However, mile 9 was another story. I thought I was going to be sick for a while. Again, had to talk myself out of it. Had to remind myself that it was only 4 laps on a track. There were signs that counted down each "lap" and told us when there were 1200m, 800m, and 400m left. Those signs helped a lot. I thought my last mile would be my slowest, but somehow it wasn't. Maybe I thought I was going to be sick because I had actually picked up my pace.

Random fact: Smiling suppresses the gag reflex. If you ever see me smiling at the finish line even though I look tired, you now know why. I thank CSI for teaching me that one back in 2005.

Overall, I was happy with my time. Like I said, I wanted to use it as a training run. Wasn't planning to actually race it, but my body was ready for it. My hamstring bothered me a few times, but nothing like it did at Philly. I also brought the Garmin and was happy with its accuracy. It was nice not to have to worry about catching each mile marker and let me be in the moment the whole time.

Tom did really awesome and came in at 1:00:32. He was 137th overall (fast guy!) and 40th in age group. He's been able to run much more down here than he could in Vermont last year. Since we're running the VCM together in May, he decided to use this as a race to prep for that one, but still had fun with it. 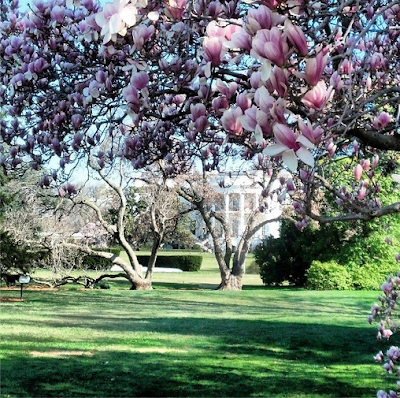 Oh, and those cherry blossoms? They were out, but I barely noticed them. Guess that's what happens when I've decided that I'm in the race to race. 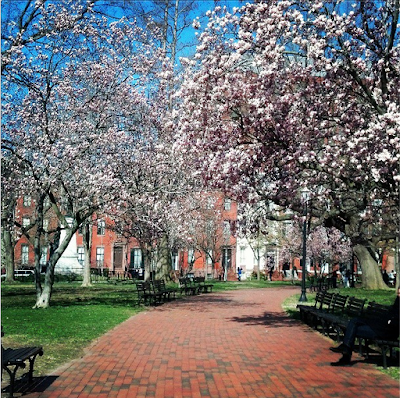 We walked to the White House after and then had brunch at Open City. I've already had my afternoon nap, and now it's time to prepare for school tomorrow. Spring break was wonderful. Only 2 more months left of school and only 3 more weeks until the Nike Women's Half.
at 3:41 PM