In the 11 years that I've been running, I had never run a 10K before Sunday. I had no clue how to run it. Tom raced them in college so he knew how to approach the race. His advice: treat it as two 5Ks.

As with the 5K I ran earlier this summer, I signed up last minute. Like the 5K, this race also falls into the Potomac River Running 2013 Race Series. And with both, the races allowed us (Tom and I) to explore a new town/city the day before when we picked up our packet. There are neat little town centers right outside of DC in Virginia and we enjoy having lunch and walking around them. 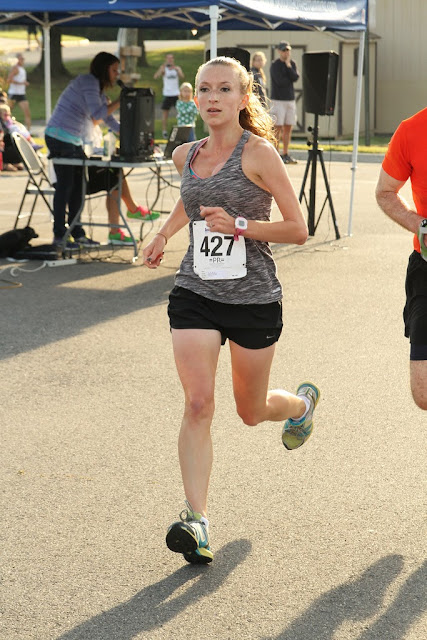 The race went started at 7:30am which is one reason for signing up so late. Did I really want to race that early? The morning was chilly (by DC standards) during warm up at a whopping 61 degrees, but once I got running I was totally comfortable (Tom did tell me this would happen but I was a baby about it for a while). However, I was absolutely dripping with sweat by the end of the race.

I try to spot women on the starting line that I think I'll be near, but in reality have no idea who is who and how fast they run. Three women immediately took off once the gun went. As we approached mile 1, another woman caught up to me from behind. I stayed with her, realizing that she may be more experienced than me and may know pacing: She didn't go out too fast, but had a pace I could maintain at this point in the race. 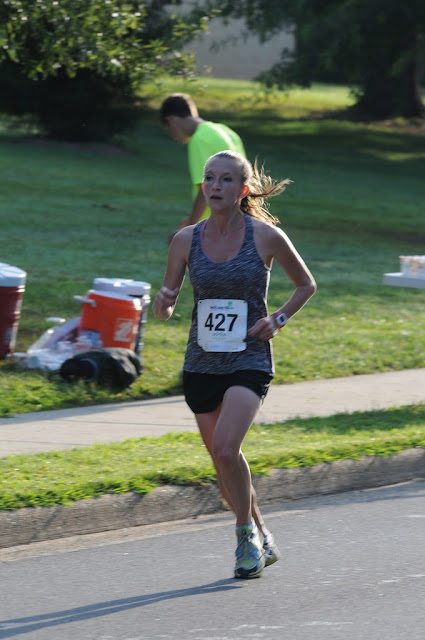 This is where the tricky part came in. The first two mile splits were off. My Garmin did not register the first mile for some time after the official mile marker placed on the course. The same thing happened for mile two. But it was spot on for every mile after - beeping as I passed each marker. As soon as I saw the 6:18 on my watch at the 1 Mile mark I eased up. I did not know that the markers were off. It wasn't until mile 3 that I figured out, and then turned on the speed. My watch had been right all along, which meant that my splits were slower, not faster, than I wanted them to be. 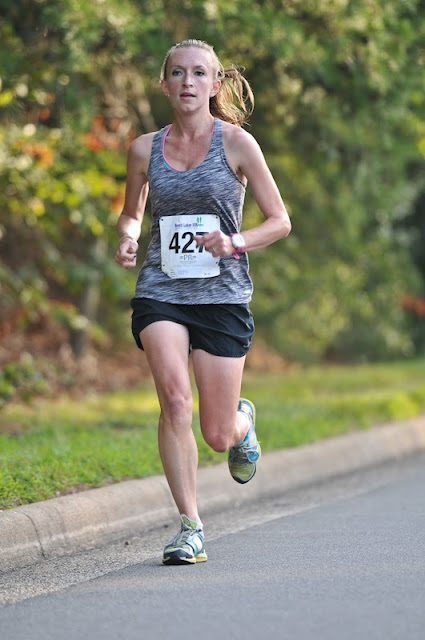 The first three miles flew by. I felt SO much more comfortable in this race compared to the 5K last month. My body didn't hurt and my breathing was more even. Clearly the track work and the tempo runs are paying off. By the time I got to mile 5 I had to work a little harder, but I felt great for that final mile and was able to hold on. I've reached the point where I can fully convince myself to run faster at the moment I feel tired. I was surprised, as this isn't normally the case. As soon as I felt myself slowing down and wanting to quit, I convinced myself that this was the most awesome thing in the world (I knew that it wasn't) and that I could keep going. 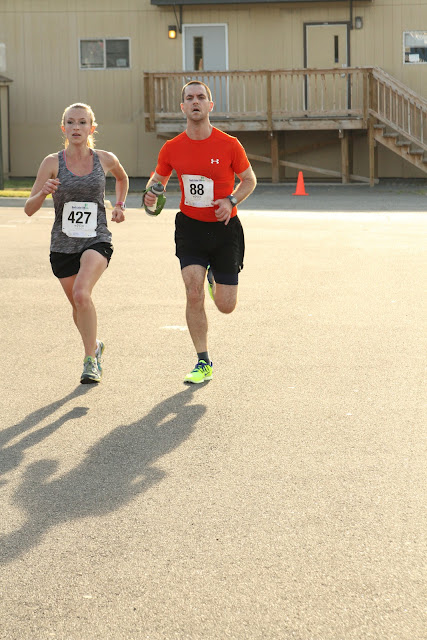 I had a goal to run under 42:00, which I did, but I had to pick up the pace in the last three minutes to finish under the goal. By picking up the pace, this also meant that I somehow was able to sneak past a guy at the end and he didn't even react. Men don't seem to enjoy having women beat them, especially down here. They usually speed up when they see me trying to pass. I hear it's something about the man's ego or something.... 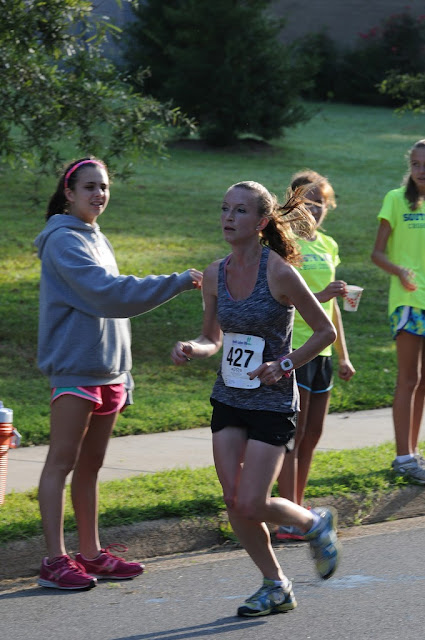 I would love to break 40:00 someday but have no clue when I'll be running another 10K. The distance was fun - the pace was quick and the race long enough allowed me to think a little more while racing. On the other hand, I could see how that would be torture if I were to have a bad day.

PR Running seems to put together some great races. They have a ton of food at the finish and the Nike Tech shirts look great. This race helped support the South Lakes High School, where we ran. A bunch of kids from the school volunteered. They were so enthusiastic that they were offering us water at the water station that sat 200m from the start. Thanks for the offering guys but you have to understand that a 10K is 6 miles, not 600 meters, and we definitely don't need water right now.

Sadly, the only bad thing about this race is that my hamstring is bothering me again. I could feel mini-tears happen throughout the race and even today they're still there. I'm icing, rolling, and sadly, still running, since nothing seemed to help it in earlier this year except actually starting my marathon training. Yes, it's stupid to be running still and I know I should think long term...

That concludes summer running since Labor Day (in my mind) marks the end of summer. I have a half marathon in a week and a half that I won't actually race, and then the only other race after that is NYC.
at 11:24 AM