This week was smokin! It's amazing what sleep can do for you! It was also a new PR Mileage week - the most mileage that I have ever done in one week.

Monday: 3.4 miles at 10:06 pace (with XC kiddos) and 5.4 miles at 7:29 pace.
The kids had some easy miles for the day which turned out to be a great warm up to my own run. I know I am supposed to be doing two speed workouts a week (tempo runs) but I never really plan on when they will happen. On this day I felt super good (I didn't run over the weekend), and my body was ready for some speed! It felt wonderful to be zooming through the streets as the sun was going down.

Tuesday: 7 miles at 8:09 pace and 20 minutes of core/fitness training
We had the kids do some core/fitness work at practice and of course we joined along with them! But my legs were like Jello afterward. It was quite hilarious to try to run on them.

Wednesday: 1 mile, day off.
Started running at practice and realized that the run today was going to be a killer. Each leg felt like it weighed 50lbs heavier and I could not move faster than "snail pace." After a half mile I realized what day it was. WEDNESDAY! My day OFF! I was so relieved to find out that I could go home and relax, rather than struggle through a run.

Thursday: 8.7 miles at 7:49 pace
It was a warm day and my hamstrings were not liking me from the beginning. It is very possible that the core/fitness workout we did on Tuesday had finally caught up to me. I went a little slower than I wanted to so that I wouldn't hurt myself.

Friday: 7.3 Miles at 7:54 pace
Today was parent-teacher conference day at school which mean I had many hours of sitting rather than standing! I could get used to sitting on Fridays. The hamstrings were a little tight when I began my run but were OK by the time I was half done.

Saturday: 8.8 miles at 7:49 pace.
Talk about gorgeous fall weather. I could have sworn I was in Vermont again! I had a very exciting morning as I watched every runner on our cross country team get a PR, and one of our ladies even won the JV race! In fact, it was so exciting, that I think I expended far too much energy cheering for them. I forced myself to go on my run, and even though it started out slow, I felt wonderful by the end. Just as expected!

Once I finished I realized that I had no fuel for Sunday's long run. Fortunately, there is a running store that is 3 running-minutes away from our place and I was able to easily solve my problem before they closed. They also told me that they had just gotten in their new Asics GT-2000 series and I was SO VERY close to buying them. I told them I would be back this week. It is so hard to stay away from new running gear!

Sunday: 16 miles at 8:07 pace.
The first 11 miles were awesome. I hadn't felt so amazing at the start of a long run in months. Seriously! I was a brand new person, all thanks to a few extra hours of sleep this week. 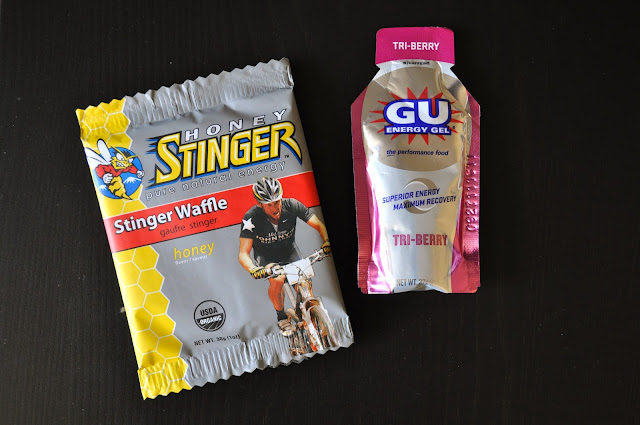 I also tried some new running fuel, Honey Stingers Waffles, and LOVED them. They were delicious, they did not get all over my face like GU does, and I could pretend that I was eating dessert for a portion of my run. I only had one during the run and opted not to open my GU for a second refueling, which meant that my legs started to feel fatigued during the last 3 miles of the run. That was OK, because I knew that I would be able to make it home and eat lunch.

Has anyone else tried the "Stinger Waffle"? They're made with organic ingredients, and ingredients that I can actually pronounce. I sometimes worry about what actually goes into GU and question my reason for choosing to fuel with it. The waffle is more natural, and much tastier. In fact, I would love to figure out how to make them myself someday.

It's time to shower, time to lesson plan, time to get the Patriots into gear so they stop losing, and time to figure out what my dessert treat will be for today. Do I make the box of brownies in my cupboard and then have brownies for lunch this week? Or do I go next door to the Fro-Yo place that I have only been to 3 times since I moved here so I can get some frozen gummy bears and marshmallows? Oh our first world problems!

I hope you are all having a relaxing weekend!
at 3:13 PM