Holy Smokes - I just discovered a large number of unpublished posts that I wrote LAST SUMMER! Ugh! Why didn't I ever publish? Who knows? Why am I going to publish them now? Who knows?

Let's travel back a few months ago to a hot night in July. It was a friend's birthday. A friend that I've known since elementary school. In fact, we used to be neighbors and did a skit on Dolly and James Madison when I was in 6th grade. She lives just outside of DC so we get to see each other a few times a year. Anyway, her (now) fiance threw together a birthday evening for her at a tapas restaurant in Chinatown, called La Tasca.

I think I had heard mixed things about the place but was so excited to try it out. On that evening, we were able to get unlimited tapas for $35/person. Yes, pricey, but it gave us the ability to fill out bellies with delicious food.

The first thing I always order at a Spanish restaurant is their croquetas. That allows me to accurately judge each restaurant. La Tasca's were awesome - and a bit different: Chicken and pork croquetas served with a garlic aioli. Not traditional to Spain - but so good nonetheless.

Next: the albondigas. Say it with me - Al- BON-di-gas! These were the beef and pork meatballs. Another winner in my book. I followed these with their pan a la Catalana: an airy bread with a tomato, olive oil, and garlic bread. The menu forgets to mention that SALT is another ingredient in it, as that was the most powerful part of the bread. This was a dish I ordered for breakfast while in Spain, but enjoy it for dinner here. Someone ordered bacon wrapped dates which were good until you were just about finished with it, and then the date TOOK over your mouth and all you could taste was the sweetness of it.

Tom arrived late and was a little daring with his ordering. He got 'pulp a la gallega' which is actually octopus with paprika and potatoes. I ate more of it than he did. The 15 year old version of myself would have been appalled at what I did, but I liked it. My taste buds have become much more adventurous over the years. 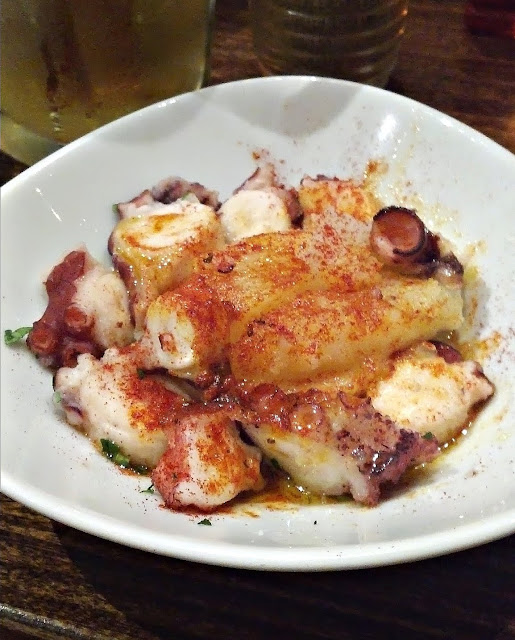 Then came the tortilla. I've stopped ordering these at restaurants in the US because they normally aren't that good. However, since we had unlimited tapas, why not try it....

It was seriously the best tortilla I have ever had. I wanted to take a photo, but I wanted to eat it more, and ultimately my tongue won out.

We haven't been been back to La Tasca, but I there is nothing that would stop me from going back. I love living in a diverse city full of different cuisines and originally planned to do more DC Eats posts like these when I moved down, but honestly have enjoyed the food too much to document it.
at 6:00 AM