*This post was somehow deleted from my blog. It has been updated and I apologize if you receive a repeat of this in your inbox/feed*

This post is long overdue. Long. I apologize. When work gets busy the blog has to take a vacation for a while.

It's also been difficult to sum up a race that I thought about, stressed about, and trained a year and a half for. So here it goes. My long morning in one long post. 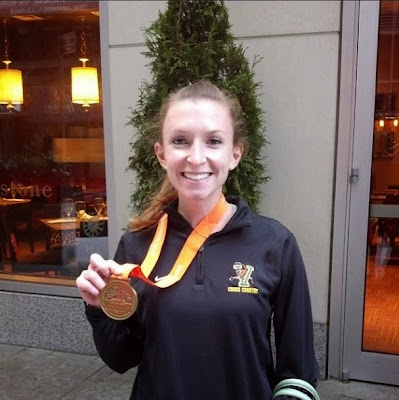 Marathon Morning
Tom and I chose to spend the evening at the Double Tree near the Staten Island Ferry in Manhatten. That meant that we were only a 3 minute walk to the ferry, saving a lot of time and allowing me to sleep in. I woke up at 5:00 am, showered, and had a normal breakfast of toast and peanut butter before we were on our way (with a coffee in hand). 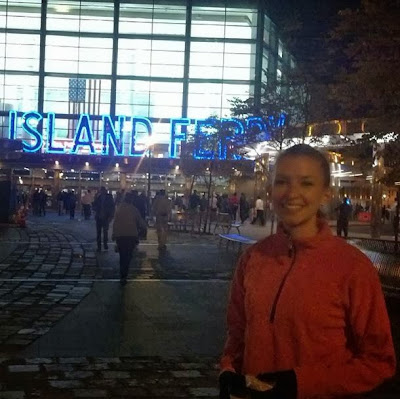 I got to the ferry just in time to board the 6:00 boat. While on it I began drinking my water bottle of Nuun. It was dark when we got on the ferry and my inside seat had limited views (not the sunrise views of the Statue of Liberty that I had imagined). I did catch a glimpse of the Statue of Liberty but spent the rest of the time people watching. It amazed me to see how international this marathon was. There were tons of languages being spoken and the experience reminded me of my marathon in Rome.

Marathon VillageWe were ushered onto buses after docking on Staten Island. When we arrived at Marathon Village we were greeted by hundreds of cops who were there to inspect our bags. The security check was quick to go through and I had very little. I had decided not to check a bag so all I had was extra clothes, water, and fuel (food and Gu).
Lessons learned while waiting to start:

The Race
As soon as the gun went off New York New York, by Frank Sinatra, began to be sung by the band at the start. The song remained in my head for the following 1.5 miles as we made our way across the bridge. I was thankful that it was no longer Miley Cyrus who had been stuck in my head the few days leading up to the race.

The Verrazano bridge experience was unique with the police chopper flying next to us and the military ship below us. There's nothing like running a marathon in the 21st Century!

By the time I was half way across the bridge I began to get a cramp in my stomach. Oh. Great. Just what I need. I felt off from the start - like I mentally wasn't in the race. I kept pushing into the cramp with my hand and tried to relax my muscles, but it was still there when I got off the bridge. At this point I started to think about one of my XC girls and how she was often plagued by cramps but she always kept going. I swear - thinking of that girl got me through that mile. I grabbed water at the second water station which seemed to relieve the cramp. Thankfully, it never did come back in the race.

Cruising
Around Mile 3 I caught up to the 3:15 pace group. Then I went in front of them. My goal was 3:10. I knew I needed to pull ahead. The only problem was that I had never looked up what splits I needed for a 3:10. I might have done that on purpose. I didn't want to think about time the whole morning. Instead, I wanted to focus on effort.

At mile 3.5 the green wave joined our wave and I spotted another 3:15 pace group in front of me. Aw Dang! So my task became to pass that group to really make sure I was going to get sub 3:15. I knew that I had a least a minute on them due to my bad starting position, but needed to solidify my time.

I caught them by mile 5. What I did not know is that the people tracking me from home were starting to see consistent 7:24ish miles from me. I was unaware because my watch was telling me a different story. It also beeped before I got to the mile markers so I knew that my watch was going to be slightly unreliable.

Support
I started to look for a few friends we had met up with NYC starting around mile 8. I honestly doubted that I would see them. There were too many spectators and I didn't want to look at every single one. Then, around 64 minutes into the race I heard my name being shouted. Adam, my old friend from high school was there! Even though I don't like being cheered for in a short race, seeing someone I know while I'm on that 26 mile journey always wakes me up and rejuvenates me for a few miles.

My other friends, Avery and Chris, spotted me at mile 12 but sadly I didn't see them :(

Let's Start Racing
As we made our way through the halfway point that darn 3:15 group caught up to me. I pulled ahead after a water station and thought I was good.And then the Queensboro bridge happened.

I actually felt good on here, but I had been warned by the PE teacher: you tend to fall asleep on this bridge. All you see are feet and concrete. There are no spectators. Just water below you. I didn't feel like I slowed a lot, but I did slow enough for the pace group to catch up and stay right behind me.

As we neared the end of the bridge I began to hear some faint cheering. We began to slope down and see an end. And that's when the pacer shouted, "Get ready folks! Things are about to get exciting!"

That was enough to spark a fire in me. I seemed to wake out of the slight-slumber that I had been running in and I caught on to the excitement of the race. We turned the corner and entered the street full of people. The pacer, knowing his job, got the crowd riled up, and the cheering got louder.

I had 10 miles ahead of me. The hardest 10 miles ahead of the marathon. I could have freaked like I did in my first marathon. But at that moment, I relied on my spring and summer racing. Because I had run a 10 mile race in April, I forced myself to believe that I was running that race again. It helped my brain cope with a little over 70 minutes more of running. I put my mind on this new race, rather than dreading the pain that could come, but necessarily wouldn't come if I could race smart. After all, a marathon is unpredictable. Run it smart and you run without pain. Make silly mistakes and it could be the longest 10 miles of your life.

Through all of this my splits kept staying consistent. Sometimes I had no idea what my splits were. The cheering was so loud that I did not always hear the beeping of my Garmin. The important part was that I was not mentally ready to race.

By mile 21 I started to get worried. Last year my calves cramped by mile 24. Would they do the same? I used the same training program but had lower mileage weeks. Would that week off in October affect me? At this point, it wasn't.
At mile 22 I FINALLY spotted Tom! He had seen me a few times but this was the first time he was in a small enough crowd for me to hear him. 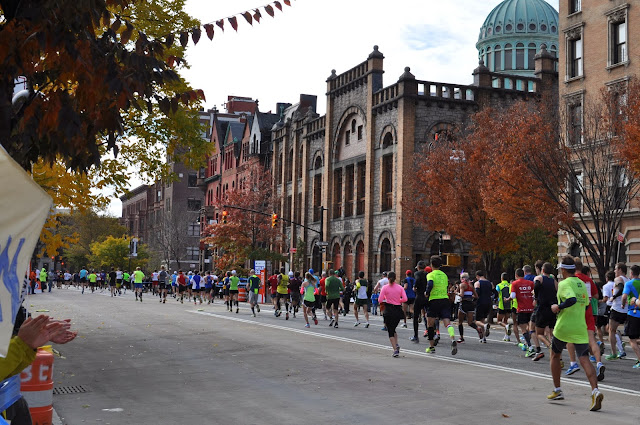 Just a 5kI started to feel relieved at mile 23. Three "short" miles. We started to enter Central Park where there was a totally different feel to the race. I was focused but my body was getting tired. My only goal was to get to that finish line. The course starting winding, elevating, and dipping. The trees lined us on each side and even though the time seemed to slow down and the miles seemed to get long, I felt like I was flying through Central Park. 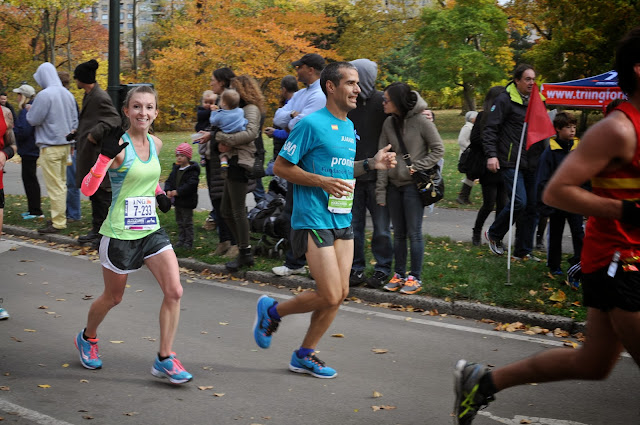 Then the weirdest thing happened. A female shouted "GO DANI!!!" Instinct told me to turn and wave. And when I did, I had no clue who I was waving and smiling at for a few seconds. Then I realized - it was Laura from Catching my Breath!! So crazy! And so cool! She rejuvenated me for that last mile. The longest one on the course.


That last mile was a killer. The finish line wouldn't end. At one point I was convinced that I was looking at the finish, but I was actually seeing the 26 mile marker. I spotted Tom once more and was surprised to see how quickly he had made it to the park. I swear - he has some superpower that allows him to teleport. Or maybe he has Floo Powder.

The last 0.2 miles took the longest of the whole race. The signs counting down every 100 meters only reminded me of how much I had to go. I had to force myself to pretend that I wasn't in the race but was doing the last 400 repeat from my summer track workouts. 300 is easy. 200 is even easier. 100 meters is just a sprint.

The Finish Area
ING and the volunteers were awesome. The finish line areas was a breeze. We were immediately handed heavy duty plastic bags full of food. I can't tell you how thankful I was for plastic bags (unlike paper bags that rip) and not having to pick up my own food.

I choose the no-baggage check option and was sent on my way to claim my poncho. The walk to the poncho was never ending. By the time I was half way though I found myself doing high knees because that hurt way less than walking. Anyone around me probably thought I was crazy.

When I finally did get my poncho I had to walk 6,073 more miles to get to the family meeting area. Ok - exaggeration, but it was unnecessarily long. They reversed the alphabet so I had to walk the entire way to get to C. 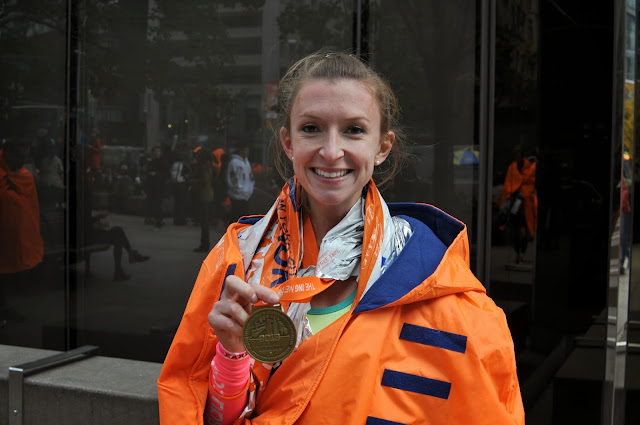 I didn't feel as tired as I looked

The poncho was worth it and was warm. Yes, we looked ridiculous. Some Internet journalist later mentioned that it looked like a cult was taking over NYC.

Indeed, we did.
Overall thoughts

I warned you it was long, didn't I?