Are you ready for a super long post? If not, then you have two choices: bookmark this and come back later, or scroll down through the photos and don't spend any time reading. I won't know either way!


Saturday
Tom and I got to Philly in the early afternoon and headed straight to the expo. The expo reminded me a lot of the VCM expo and had similar vendors (but no Ben & Jerry's samples). I didn't purchase anything, but won a few free bags and pens. All of us NYC refugees were not able to receive our shirts because of our late sign-up, but should be getting them in the mail at some point.


I was sad to find out that none of the vendors were selling Honey Stinger products. Apparently the company hasn't made its way to Philly because there weren't any HS products in any of the running stores we checked. Fortunately, I had brought along some GU, which ended up being my option for race fuel. 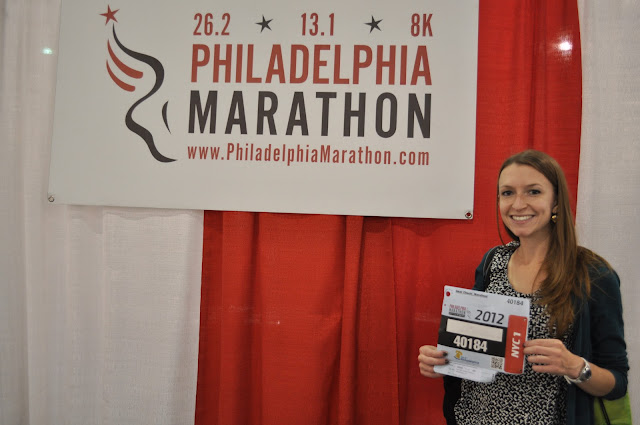 I woke up about three times during the night, thinking about the race. At one point, I woke up knowing that I had a PR ahead of me. Subconsciously I was so excited that my toes could not stop moving all night. Maybe they were warming up for the 26.2 miles?

The alarm went off at 4:00am. Thank goodness I have gotten used to this hour (thank you personal, crazy teaching schedule) and could easily get ready without feeling sleepy. I had breakfast at the hotel (yes, I still travel with my toaster), and bundled up with plenty of layers. It was only 39 degrees when we left for the race. 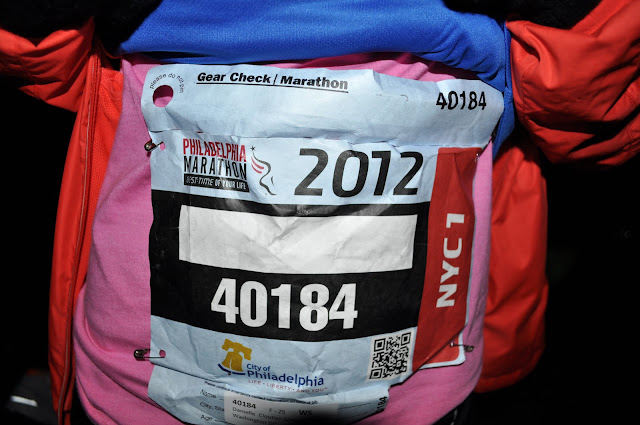 We made it to the start with plenty of time to spare (hello 5:30 am in Philly), found parking, then hung around the finish area until it was time to head to the corral. I was very thankful to not have to take a bus to the start or wait for hours like Boston. 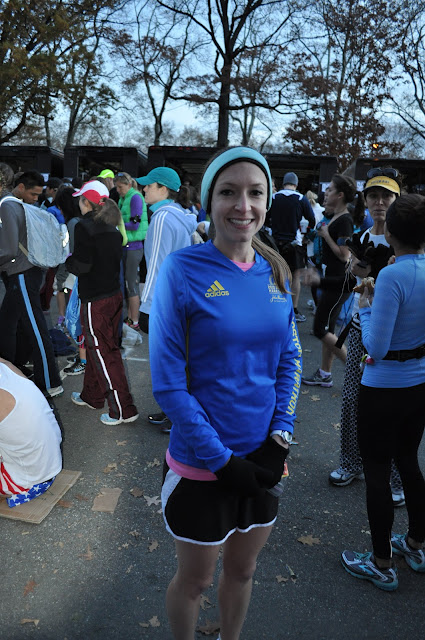 The start was chilly! I shivered for a good 25 minutes and eventually lost feeling in my feet. Thankfully, a coworker had given me some hand warmers before NYC and they kept my hands warm. I have Raynaud's disease, so I make sure my hands are as warm as they can be. This was going to be a very different experience from the 89 degree Boston race! 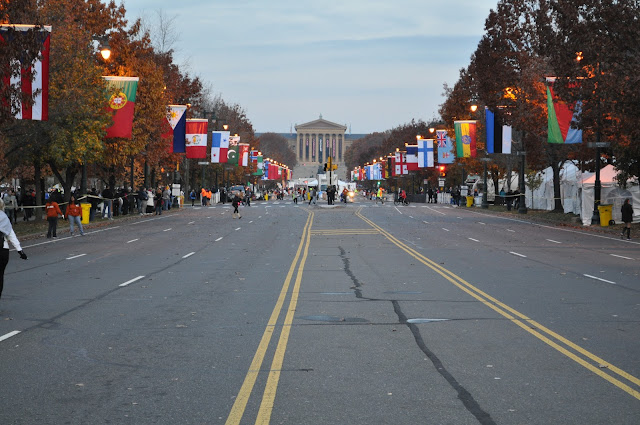 The Start
NYC refugees were split into two corrals and I was in the first. It was neat to see the sea of orange shirts. I didn't have mine because I never made it up to their expo, but hope that someday I'll have the chance to own an NYC shirt.

We started almost 9 minutes after the official race start and the announcer made a point to announce our start and change up the music. It was fun to have our own personal start, but I knew that the 9 minute delay would cause a problem. Tom was trying to see me at miles 3 and 5, and I had a feeling that he would think he missed me at 3 and head to 5 before I was even close to 3. He had no way of knowing when I had officially started the race.

And I was right.

Miles 1-3 (22:33), Mile 4: 7:27, Mile 5: 7:37
One of the few complains I have about this race is the visibility of the mile markers. I missed the first two and had no clue what my pace was. I felt relaxed. I felt comfortable. But I had no clue how fast I was going. I was a little surprised to pass the 3 mile marker (finally!) and see 22:33 on my watch. OOPS! Wasn't planning to go out like that. Yet, I was OK with it because I was still feeling comfortable. I didn't see Tom at this point, but did finally regain feeling in my feet.

I started the race with a short sleeve shirt and long sleeve over it, but dropped off the long sleeve when I saw Tom at mile 5. He was about to leave when I spotted him! 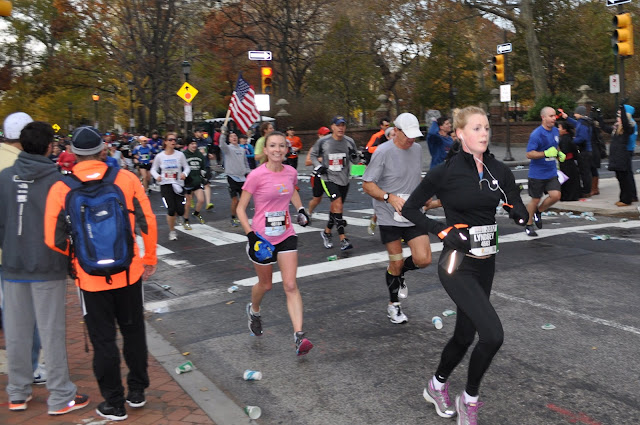 I followed the girl in black in the photo above for about 9 miles. She had a great pace going and I made it my goal to keep her in my sights. 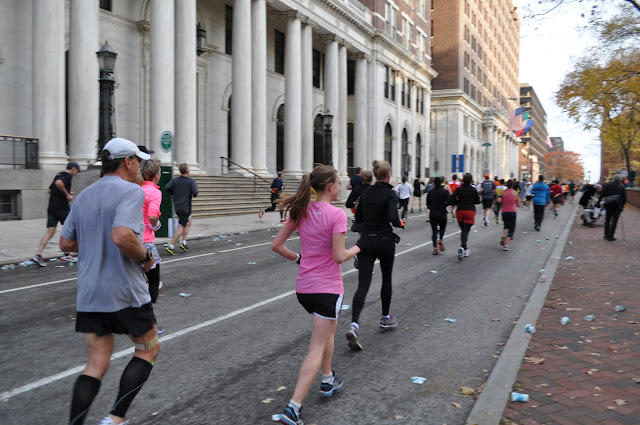 Mile 6-10
7:41 (and a GU fueling), 7:22, 7:39, 7:34, 7:41
My splits got a little funky as I weaved around people and began to settle into a groove. There were a few mini hills around this point. I kept reminding myself of the GIANT hills I trained on over the last four months and laughed (in my head) at the ones I was climbing. Training in DC definitely prepared me for this course. It was so much fun to run through the city during the first part of the race, but it was slightly too congested for my liking (thanks to the delayed start). Maybe it was a good thing I didn't do NYC after all.

Miles 11-13: 7:18, 7:28 (and a GU), 7:29
These miles were BORING! I felt like I was running the Beltline at the VCM. I had a minor freak out moment when my left knee started to hurt around mile 12. That never happens. I think it was due to the uneven road in that section. Tom was hanging out around mile 13 and I could tell that he was not expecting me to come through so soon.

My splits at this point were starting to settle into the 7:30 range. I knew Tom would be thinking "Oh gosh, she went out to fast," but I truly felt wonderful. In my head I knew that it was a PR day. I knew that I was NOT going to bonk at miles 18, 20, or 22. I was so ready to win that marathon. Not win-win, as in get 1st place, but win in a personal sense.

Miles 14-17
7:28, 7:28, 7:28, 7:26
Can you believe those splits? I couldn't. What is up with that consistency? This part of the race was very different from the first. We split from the half marathoners to begin an out-and-back outside of the immediate city. We were in nature, not sidewalks! This was also the place where we began to see the elites coming back to finish their races. I wasn't bothered by their presence next to us, but it was slightly distracting to see some of the pain on their faces, knowing that I was about to endure what they just did.

My watch read 2:00 hours exactly when I reached the 16 mile mark. I couldn't have asked for more consistent splits.

A little bit after mile 17 we turned to head back on a small section of the course. As I circled the cone, I said to myself  "We've got this Dani". Apparently there were two of me during the race: my body and my brain. They were working perfectly together the whole morning. 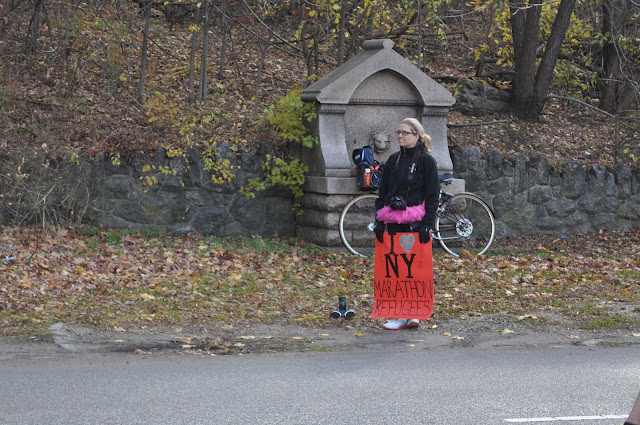 The spectators at Philly had AWESOME and sometimes hilarious signs. I think I saw my favorite sign somewhere along this set of miles (or was it around mile 15?).  It said "Smile if you just pooped your pants". It made me smile because I thought it was funny. Then I realized I was smiling, which meant that it looked like I pooped my pants. Then I smiled more! Which is probably the point of the sign!

For the record, I did NOT poop my pants.

I somehow knew early on that wouldn't bonk or hit the wall. That's a pretty unreliable thing to predict. Yet, I didn't bonk at all! Mile 18 was a few seconds faster than the other miles. By mile 20 I finally ditched the hand warmers, but kept the gloves on. I also got rid of my plastic bag of race-fuel and held on to only one GU packet. It was time to work! I made it my goal to not loose any seconds during this section and to run it strong.

Miles 24-26.2
7:41, 7:46, 7:47, 1:35
Up to this point, my body felt great. Remember that muscle in my right hamstring that's been bothering me for a few weeks? It actually started to bother me around mile 3. I was very cautious about it all morning. Perhaps I could have pushed myself more during the race, but I was very afraid to snap the muscle and loose out on a PR.

Mile 24 brought on a new problem. Both of my calves started to cramp up! They were toast. I couldn't move them, but I didn't give up. I was having too much fun to even think about slowing down. So I pushed harder.

And yet...slowed down.
Well, that happens.

Tom was on the course around mile 25! I was totally surprised to see him, thinking he would be back at the finish. 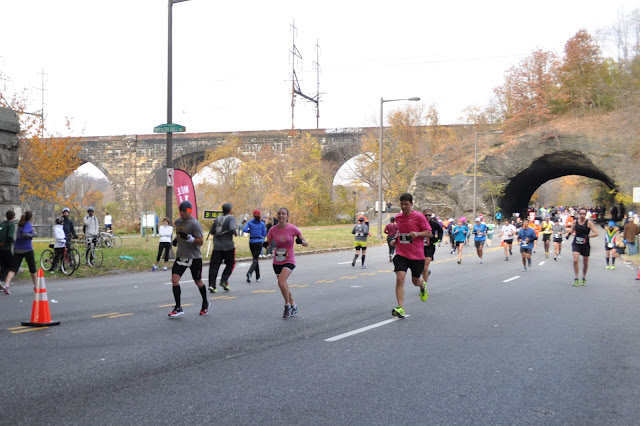 I tried a few mental tricks over the last three miles to get to the finish. The first one was to trick my mind into thinking that I was running the last three miles of the VCM marathon. I have run that section of bikepath so many times that I know I can finish it, thus finish this race, which was similar. The second trick was to pretend I was going out on a 3 or 2 mile run in DC and to picture where exactly I would be at that moment of the run.

The tricks worked and soon enough the end was in site. 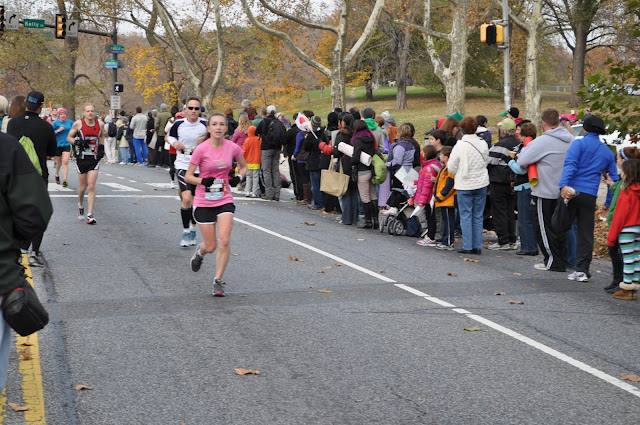 (My form only got worse the closer I got to the finish. It's almost too painful to look at in the photos...)


I was surprised to see Tom once more closer to the finish. How on Earth did he make it there so quickly?! He is such an awesome spectator that he began to run with me after I passed him before the 25 mile marker. I was glad that I didn't see him running along the bike path next to the course because I would have gotten so distracted and knocked myself out of the zone. He knew that would happen, and ran quietly until just before the finish, where at that point he did one final cheering session!

It was so nice to see his face pop up and know that he would be along the course cheering for me! I have to thank him for carrying around the extra gummies, water, and warm clothes in case I needed them. He probably went through more trouble with that backpack of his than I did with my race. Thanks Tom! 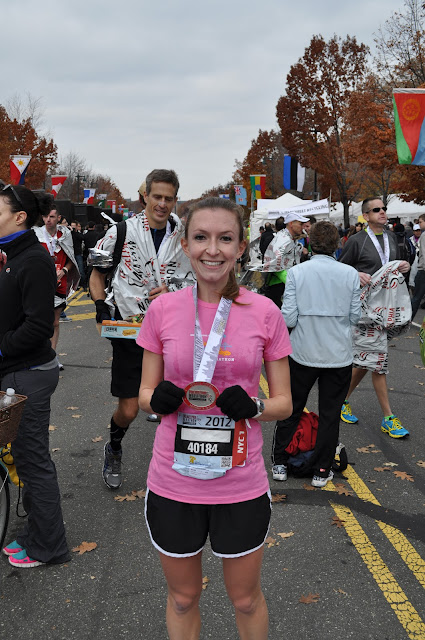 I finished and my first thought was "oh wow! I can actually walk!" I felt good. I slowly made my way through the food and free-massage tents before heading into the city. The hamstring was in pain during the massage and definitely was impacted by the race. I want to be optimistic and think that it can heal by Thursday, but I'm afraid that it may need more time to recover.
_______________________

We live in a very small world. Two people behind me in the food line were from NE: one from Vermont, the other from Albany. I unexpectedly ran into a friend who had also ran the marathon, and we had no clue that the other was running it. She PRed as well! I also had a chance to visit another running buddy from VT after the race. She was so nice and let me use her hotel room to shower and change. It was great to catch up with her and hear about her race - another PR! Philly must be the place to run fast!

Thank you to all of you that offered words of encouragement, advice, and support throughout the last few months! I thought of so many friends, family, and blogger folks while I was out on the course and I got a bolt of energy and inspiration each time.

This race was awesome. There will be a few more posts in the coming days about my thoughts on training and recovery, but for now, I'm going to relax!
at 4:38 PM