I've known for a few weeks that I had a 5K PR waiting inside of my, but needed to get a race to find it. This weekend Tom and I each ran in the =PR= Run with Dad 5K at South Lakes high school. I woke up that day not as excited to run it as I was to run the 10K a few weeks ago. The 5K isn't my most favorite race. But fortunately, I didn't let that hinder me and was able to finish with a new PR for the day. 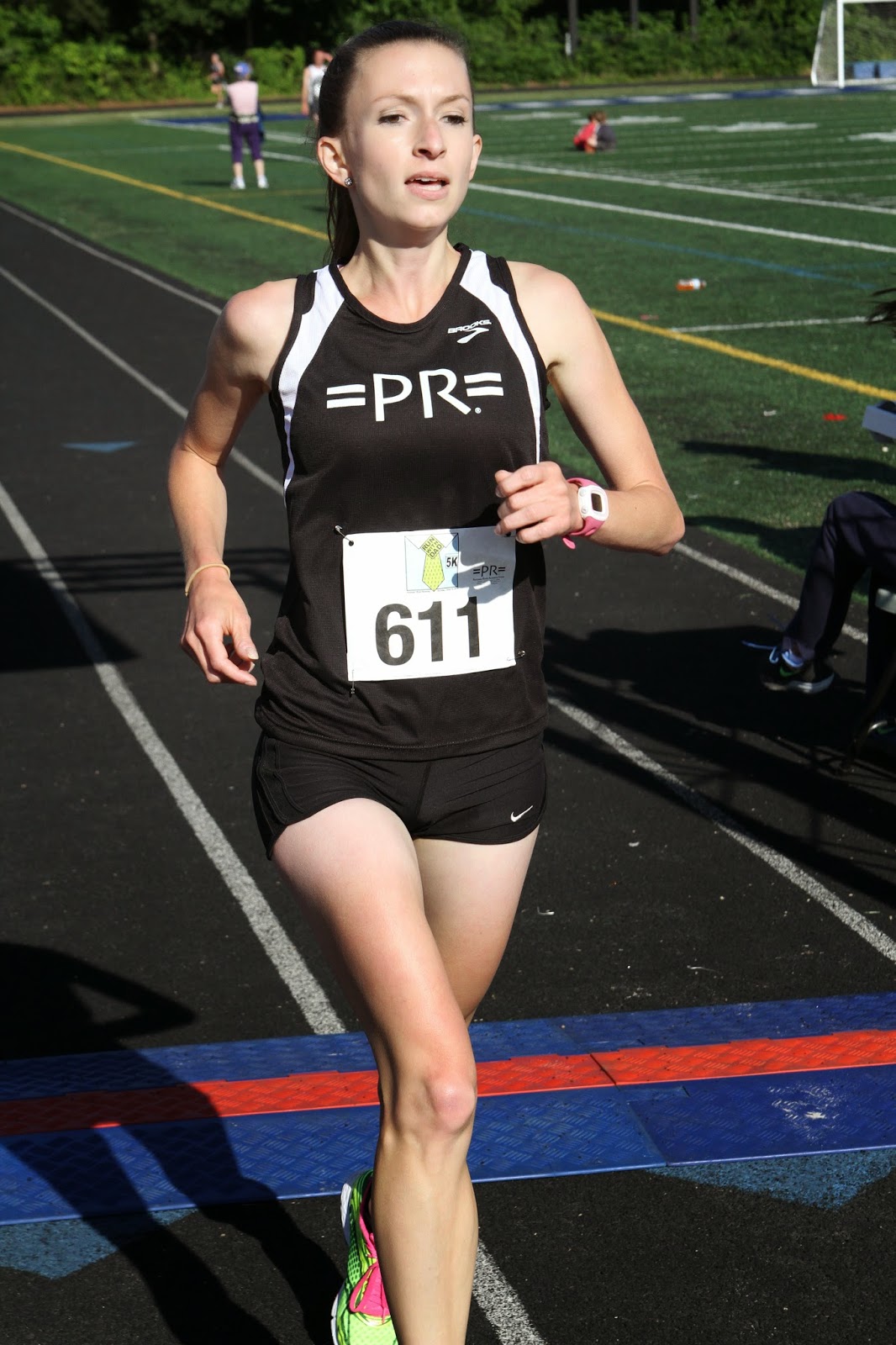 We arrived around 7 to get our bib and then went on our own ways to warm up. It's funny - people often ask if we run together. The answer is rarely. Tom's so much faster than I am, and I am so stuck in my ways. I warm up the same way each time and begin to freak out when it starts to go differently. I am so independent and need freedom to go on my own.

I felt great on the warm up: I got in 14 minutes of running before drills, and knew my body felt awake and ready. We met up again on the starting line, 5 minutes before the race, and found ourselves starting a little bit back. Everyone was ready to go and lined up before we had gotten there and it seemed impossible to get up front.

The start was a little chaotic. We ran 300m on the track at the high school before veering off and into the woods. It was slow, and there were a ton of people in front of us that didn't need to be right on the starting line. I jumped up with other PR running ladies, recognizing a few and knowing I wanted to be with them for the start. I ran my first 10K last year at this school and was expecting to run a course very similar and was surprised to find us going onto the bike path in the woods. Rather than the open roads with little turning, we found hairpin turn after hairpin turn, as well as a constant variation in elevation. Instead of focusing on my body and on my pace I was constantly worrying about the people around me, making sure I didn't take a face plant as I turned a corner, and mentally battling how the course reminded me of some high school and college courses I had run.

There was a lot of passing during the first mile. Being a Father's day run, there were a lot of younger kids and teenagers that were running. These runners also went out with a very nice mile split, only to drop off in the second mile. I kept my sites on another PR team member right in front of me, not knowing who she was, but recognizing that she was a strong runner. My goal was to stay with her as long as possible. Little did I realize that she was definitely the first place woman of the race.

Good. I met my goal mark for the first mile. Last year this split would have freaked me out completely. However, after hitting sub 5:50's on runs in the spring, I knew this was OK. My only problem came with keeping this momentum in mile 2, my weakest mile. This was the mile I struggled the most in trying to stay in the present, rather than having flash backs to races in college when we ran a similar course at St. Mike's.

As I passed the marker and saw 12:18, I knew I had slowed, but couldn't do the math in my head. At this point, I was strictly running on feeling. I had only looked down at my watch twice. I knew if I wanted to break 19:00 that it would be close. So I tried to push harder.

5Ks, while much shorter than a marathon, take much more focus and a higher pain tolerance. They also require that the runner do some actual SPEED workouts before racing. I haven't done speed in weeks.

Everything was going great until I came out of the woods for the last time. I had just over a quarter of a mile left to run and made the mistake of looking down at my watch as I went up a hill. In that instance I began to dry heave. Ugh, not this again. I held it in, and kept up the pace. But it happened again. I had no choice but to slow down for a few seconds to stop it. Slowing worked, but my momentum was gone. While I love that there was a camera crew at this race to take free race photos, I hated that they would have been able to catch my lowest moment on film. I was also not ready to loose my breakfast while on the track, now knowing that I was the second place female after a man yelled it in the woods. 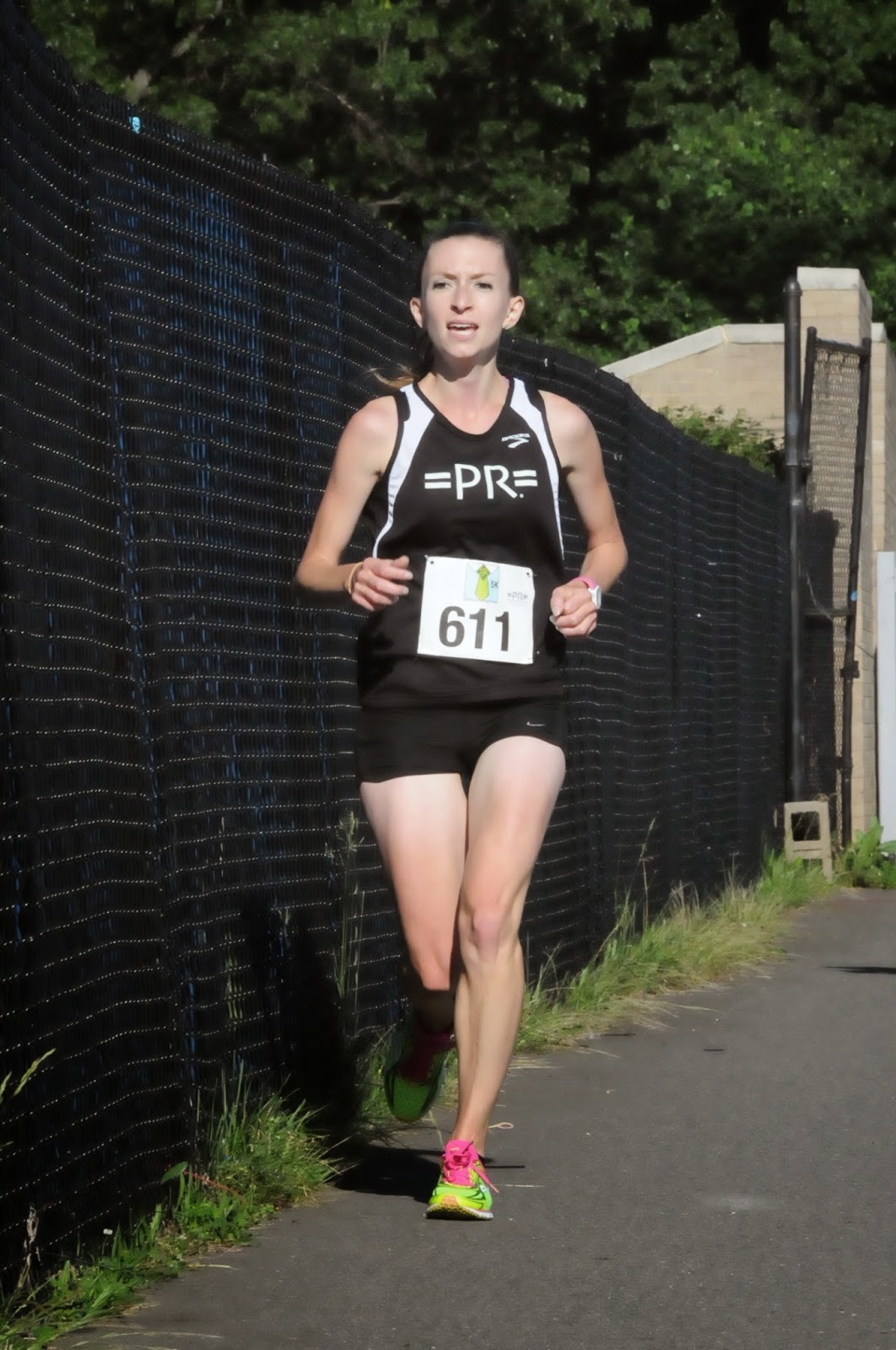 As I turned the corner I heard my name being called by the MC, then heard Tom's voice as he cheered me on. He knew my goal was low 19's, and based on his voice, I knew that I had to work hard to get there.

I'll take that PR, but I'm not done. As soon as I finished I was ready to sign up for another, faster race! I need to break 19. I never thought I would have that as my goal, but I know it's in me. I just need to get on a track for a few weeks.
-----

I have been enjoying the opportunities that the PR Race team has given me this spring. I love being more involved in races and feeling like there is a purpose to my training. It's also been great to meet other runners on the team. A few of us went for a cool down run afterward and we discovered that two of us had lived in Vermont and had competed against the same runners in high school! 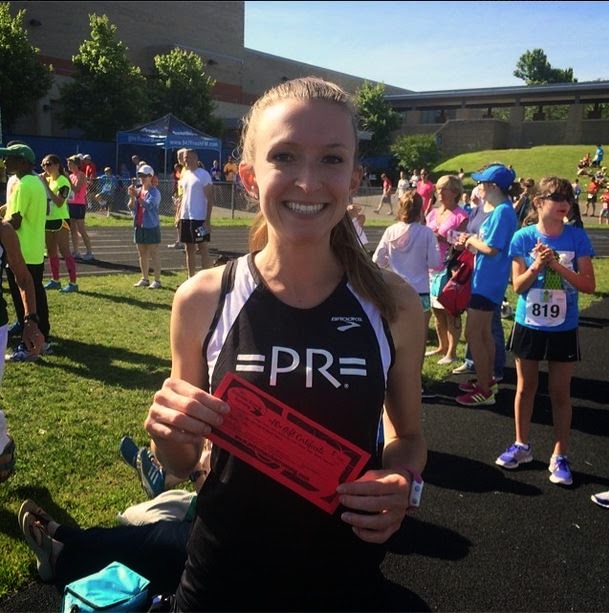 This race was also put on by PR Running. For the runners, there is a ton to offer: awesome tech t-shirts with registration, a lunchbox (for Father's day), a master of ceremony that was made for the job and makes it fun, food at the finish line, and terrific prizes that include gift certificates to be used at their store. I got $75 for second place, which means I can pick up some nice sneaks in a few weeks!
at 4:31 PM