As soon as I got back from Boston I went back to teaching and coaching. Life is crazy for a few more weeks but I couldn't be happier to have it this way. Unfortunately, it means that I had little time, until now, to write about Boston.
__

As I trained for Boston this winter and spring I became aware quite early on that Boston was NOT going to be a PR race for me. I would have thought more about forgetting it if the bombing had not happened or if I didn't know that I might actually meet Laura while there. I went to Boston to experience it and got more out of it than I could have imagined. 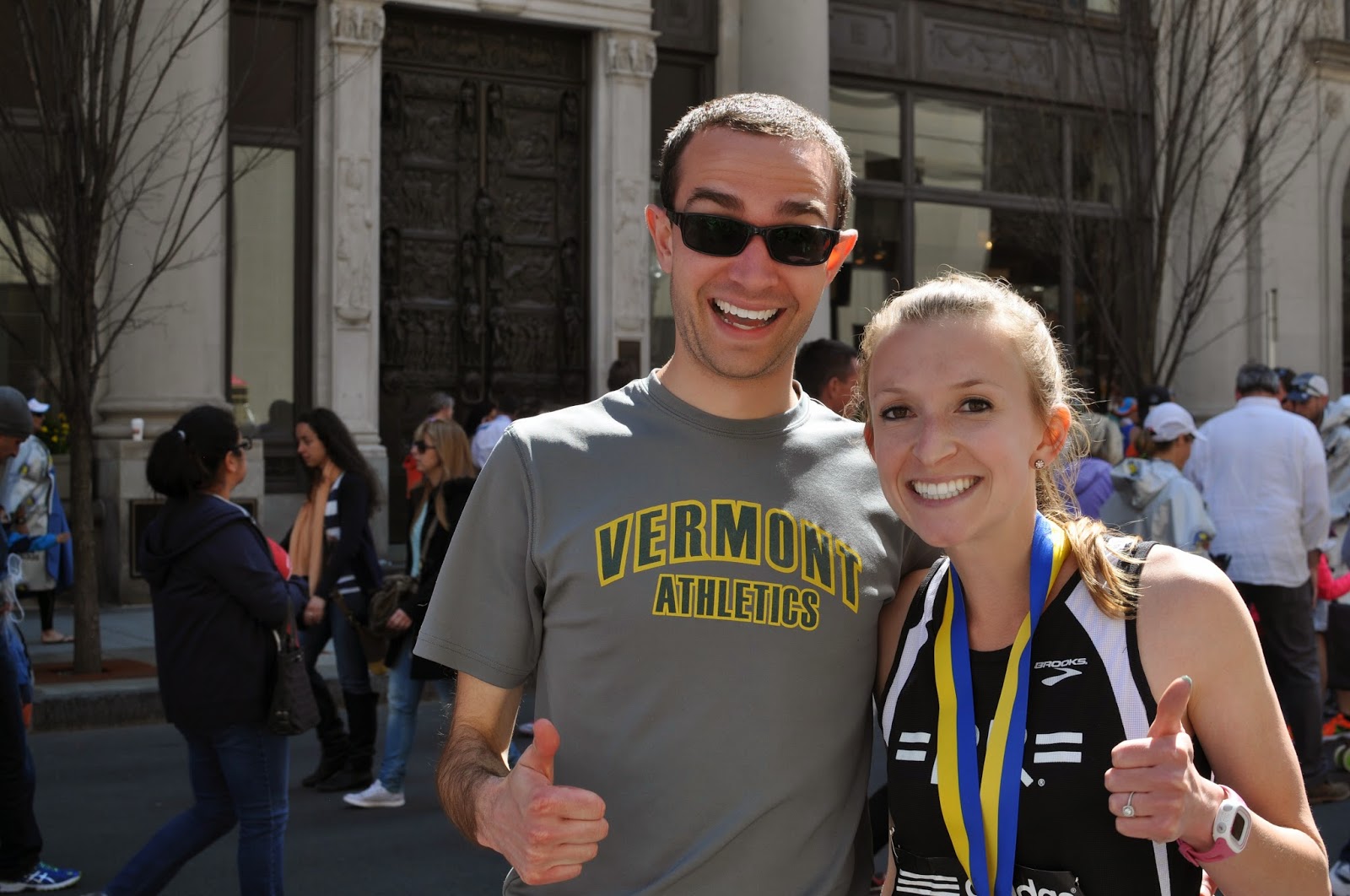 The race weekend was awesome. And on race morning I woke up excited. I did my normal morning routine which includes my toast with peanut butter (minus the toaster), water (normally I drink almond milk) and coffee. Tom and I were staying quite close to the bus pickup location so our walk was no more than 5 minutes.

Laura and I had planned to meet and I'll be honest to say that I was a little nervous to be meeting other "strangers" (aka bloggers) that would most likely be there. But once we starting gabbing those nerves were gone and it felt as if we had been friends long before.


The morning weather was perfect: sunny and a little cool. Laura, Ashley, Sarah, Lindsey and I boarded the buses, opting for the back, and we chatted the whole way. The ride was going great until the need to pee kicked in and we quickly regretted drinking all the water we did.

Our time in Marathon Village flew by because most of it was spent in a porta potty line. That's the life of a marathoner sometimes! We had some time to chill before being called to our first wave. I know I'll keep saying that things were "awesome" but it really was awesome to share that whole pre-race experience with those girls.

Laura and I were seeded in the first corral of the second wave so we had to say goodbye to the others. We had a few minutes to hang out at the start and talked Saucony and running before the race began.

We were pretty close together for the first half mile but at some point I lost her. My goal at this time was ideally to run the first mile at 7:40-7:50, knowing that 1)I had pretty bad training this winter and 2) that the hills would kill me later and I'd rather save my energy for the end.

If I had had $10,000 that morning I would have bet that I was on pace for a 7:40-7:50. I am normally good about knowing my tempo based on effort. Sadly, however, when I crossed the first mile (which may not be accurate because I started my Garmin slightly before the actual start line) it read 7:20. NO! How can that possibly be?!

The next 3 miles played out in a similar fashion. Apparently I gained a lot of speed this winter and my new "relaxed" pace was faster than in the past. This wouldn't have been of any worry if I had actually done all of my weekly mileage and long runs, but I knew that it would catch up at some point.

I began to take water or Gatorade every 2-3 water stations and Gu every 5.5 miles. This was different than in my most recent races, where I try to space it out a little more, but I also hadn't run a warm marathon since the Boston Scorcher of 2012.

As we arrived into the towns with the bigger crowds I found myself watching the sidelines rather than focusing on my running. At a few points, the emotion of the event caught up to me and I could feel myself wanting to tear up a little. The atmosphere was quite spectacular. Tons of parents were out there leading their kids through cheers and of course, the college students were there offering their beers, high fives, and enthusiasm.

As we got close to the Weselyn girls I drifted to the center of the road knowing full well what was about to happen. I don't know how those girls keep their energy levels up for the whole day but that marathon would not be the same without them!

I won't deny that I was actually feeling too warm in this race. Some people thought we were crazy for thinking it was hot, but apparently I had adapted to the cold winter this year. This took a toll on my stomach which didn't feel the same after mile 13. Perhaps Gu shouldn't be my fuel brand of choice anymore?

I'm not sure if I hated mile 14 because other people had been talking about their dislike of that mile earlier in the morning, but when I got there, I felt a little bit of dread (especially about doing the math: 12 more miles...) Fortunately, I began to remind myself that I didn't come here for a PR. I knew that at one point my body would have to work harder because of the lack of training. I also knew that I wanted to enjoy this race, and not race it. I began to focus more on the experience and of what was around me, instead of on the dreaded distance that lay ahead.

My goal was to remain mentally calm and to walk away from Boston having had the full experience.

At mile 17, which was 1 mile further than I had run since November, I began to really feel the toll of my lack of training. This also happened to be around the time of the hills.

Laura caught up to me around mile 19. I was lost in my own world of thought when I spotted a green shirt speed by me! I picked up my pace to catch her. We chatted for a bit and she relayed that she had been hitting consistent splits. She was totally right - that girl was kicking out each mile at a consistent time! She passed me, looking great, and I held on for a while before losing site to her in the crowds.

In the past, Heartbreak Hill  had felt easy for me. I thought that I would have no trouble with hills having run TONS of them in DC. But I guess you can't rely on that when you haven't fully trained (30-40 mile weeks just doesn't cut it for me any more). The hills didn't kill me, but I definitely did not enjoy them as much in the past. What I did enjoy, though, was seeing some friends from college (Anna and Will) at the top of Heartbreak! Anyone that is able to get my attention in a race is one good cheerer, so that tells you a little something about their enthusiasm!

Somewhere at this point I stopped looking at my watch. The loud crowds made it difficult to catch each mile. When I did catch it I noticed that I was beginning to slow, and I was OK with that.

Around miles 23 or 24 of a marathon I tend to go bonkers in my mind. Time slows down and the minutes drag on. Going into the race I knew that I wanted to focus on this section and make some changes. While they happened to be my slowest miles (24 to the end), I can say that my focus on experiencing the race eased my mind and allowed me to have fun. I kept telling myself that when I got my phone back I would get on Facebook and announce that I would be doing no more marathons. I seriously thought it would be my last, so that thought was my motivation to enjoy that time. Instead of counting down how many minutes before I could stop, I used that time to soak in everything.


I finally saw Tom and a high school friend, Kelley, at around 24.8. Again, you have to be good at cheering to grab my attention. They were just what I needed to get up over the hill and get past that darn Citgo sign that normally taunts me about how close I am, yet how so far I am from the finish.

I love the photo burst Tom took. From me in my zone, to then hearing my voice, automatically responding by waving, and then the realization that it was Tom and Kelley! 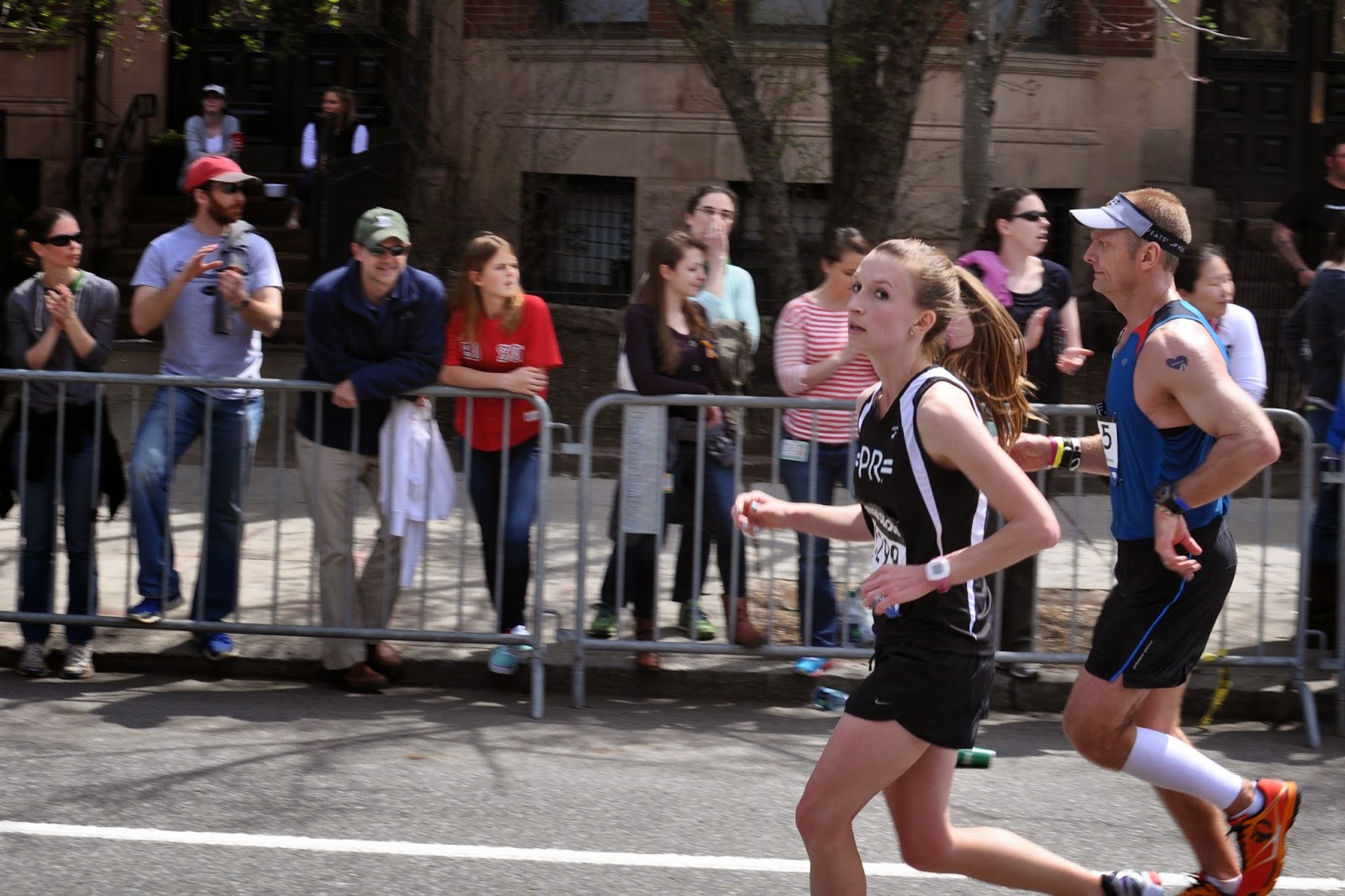 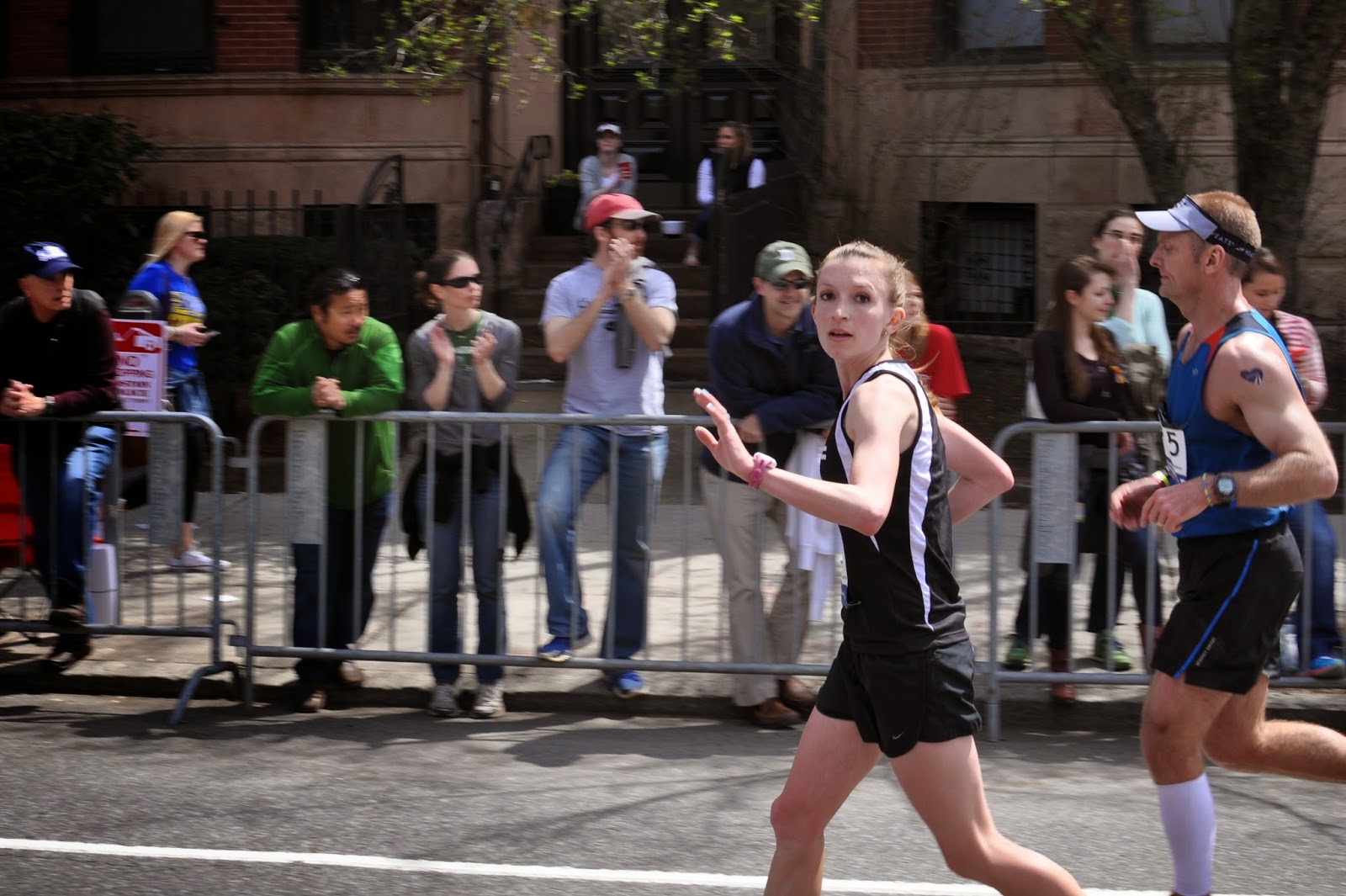 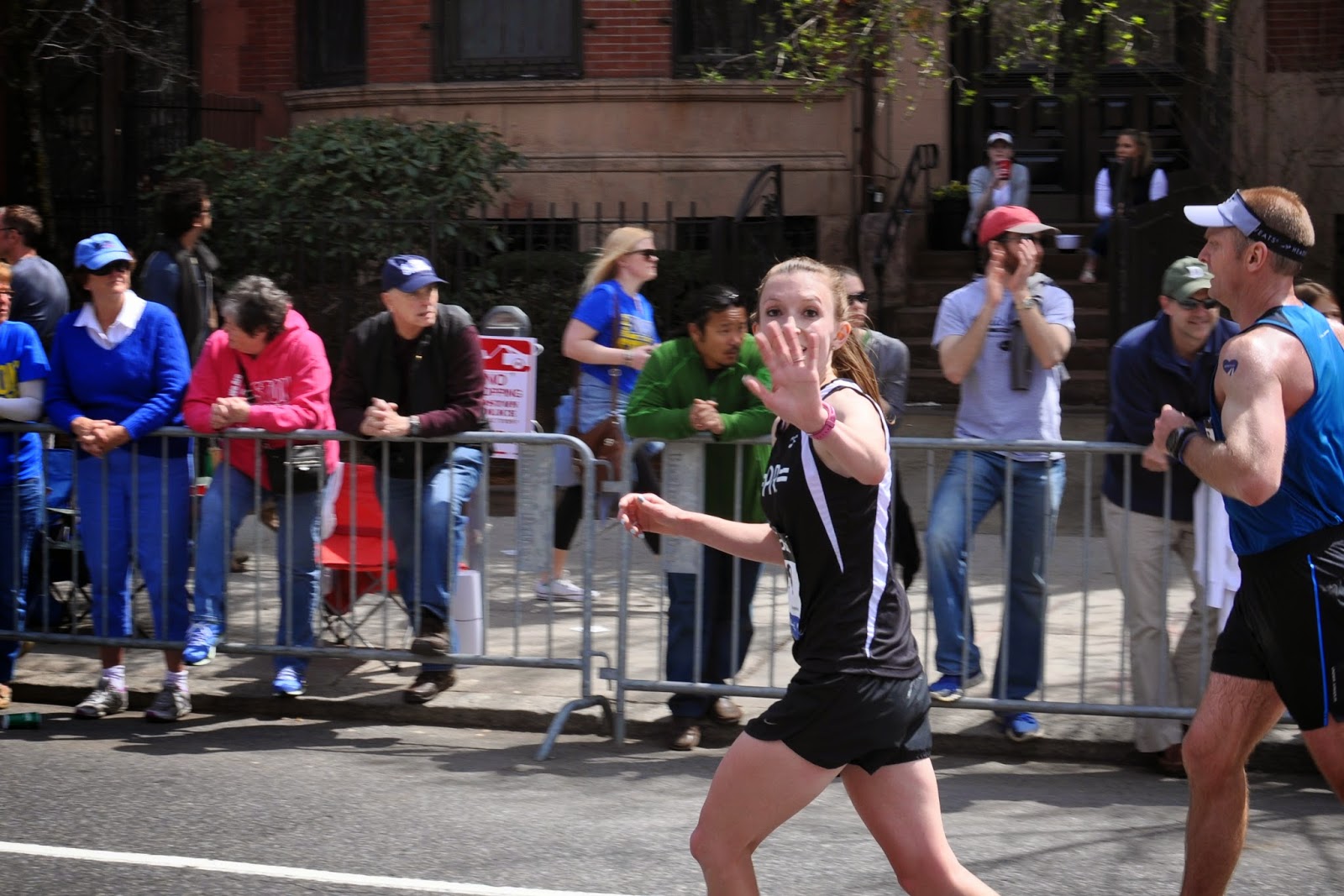 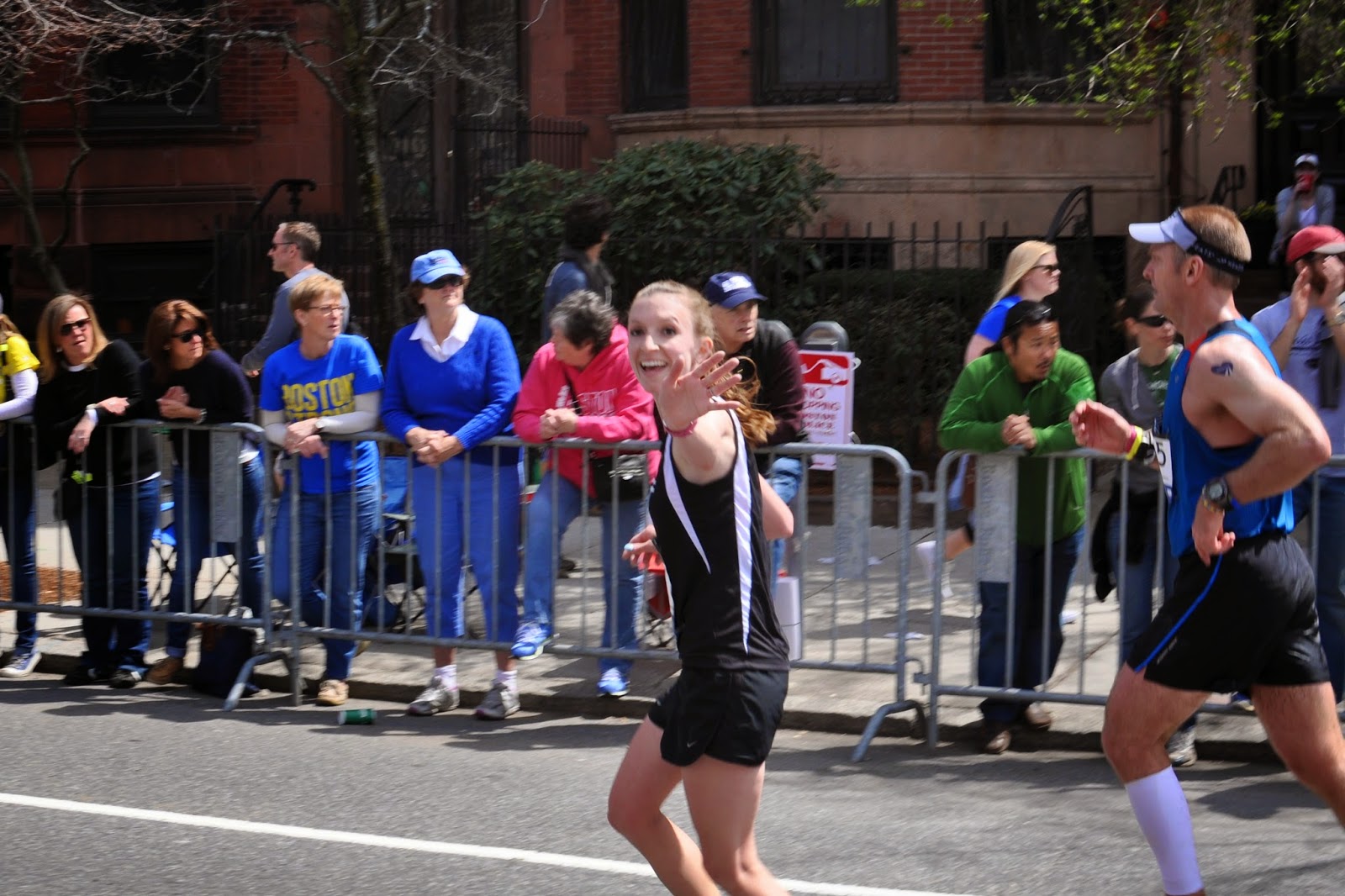 I haven't mentioned that at this point the crowds were non-stop cheering. They were louder than before, which had always been non-stop cheering as well. There were only a few spots along the entire course when we were left to our own voices, but for the most part, this race was heavily spectated.

Just like in my first Boston experience, it was amazing to turn right and then left onto Boyston at the end. The crowds are amazing and it is a perfect ending to the whole race. What was better was reaching the finish and hearing that Meb had won (I love him!) and that Laura was there! We hugged and celebrated, then got our goods before making our way back. 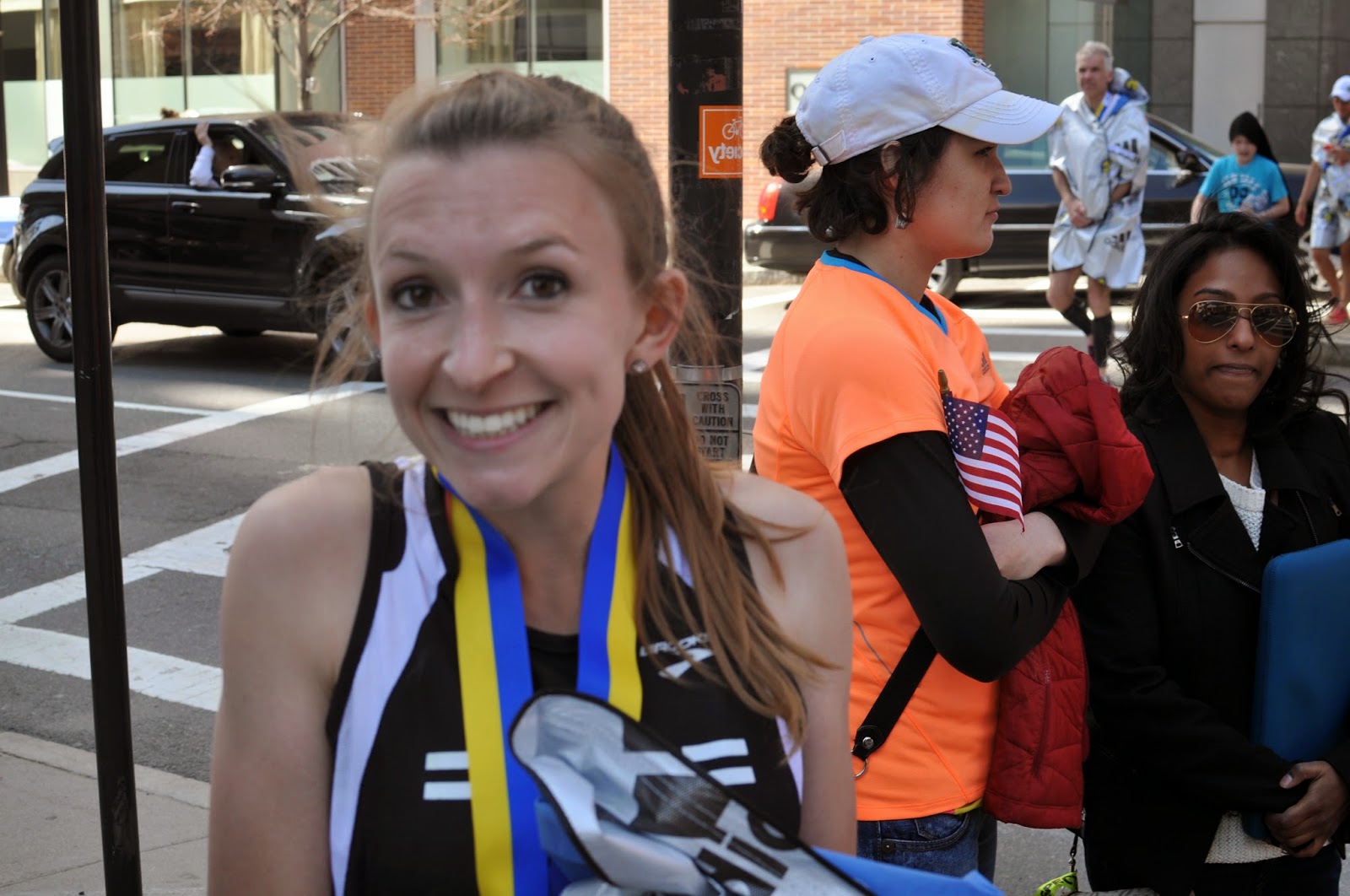 The worst part of a marathon for me is the post-marathon walk. My legs cramp up immediately, as does my
gluteus medius. At one point I couldn't walk anymore and sat down to stretch. Laura and I took off our shoes and I discovered two purple toenails, another toenail with a blood blister under it, and big blister under one of my big toes. I had felt them since mile 5 and now knew why. You better believe I wasn't putting those shoes back on and we walked out of the finish and around Boston's streets barefooted. Yes, we got crazy looks from folks, but there are plenty more disgusting things than pavement people!

Laura and I said goodbye and I headed to the family meeting place to meet Tom and a former UVM teammate, Charlie. After changing at our hotel, our other teammate, Doug, joined us for a a Sam Adams 26.2 and a burger at a nearby bar before Tom and I had to jet to the airport (get it?! Jet? Airport?!). 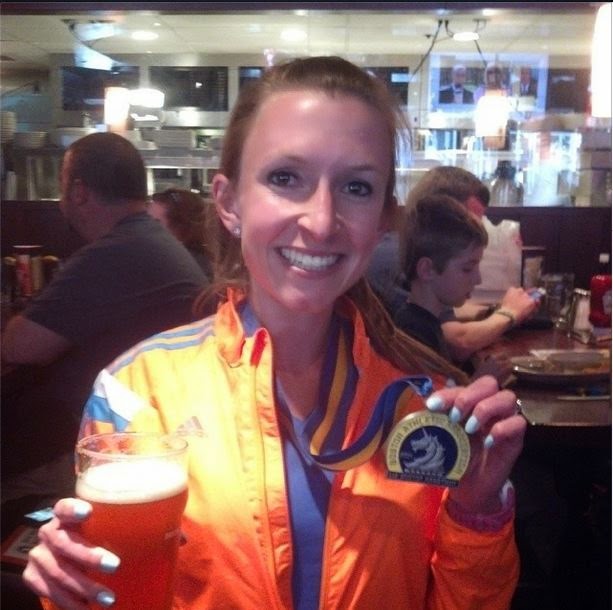 The weekend was truly amazing. We got to meet up with old friends, I got to meet new ones, and the race itself seemed like a celebration for the city.

Oh - and that need to post to Facebook and claim my retirement from marathons? I didn't actually do it when I got back. And what do you know - I have been tempted a few times since to start training again. We'll see what happens in the future, but for now I'm focusing on shorter distances.
at 10:48 AM