I made my own chocolate syrup last week. I decided that I need to cut Hershey syrup from my diet. I was addicted to it. I'd wake up and have a huge glass of chocolate milk, only to want more of it as soon as I finished. I also noticed that I would crave more sugar or candy right after I drank it.

What's worse is that Hershey syrup is loaded with lovely high fructose corn syrup (gotta love those new commercials that are trying to make you believe that HFCS isn't bad for you). According to a recent study the HFCS has mercury in it? I haven't read much about it, but Hershey's was third in mercury content (that just great). Therefore, not only am I trying to get rid of my chocolate milk addiction, I'm trying to eliminate HFCS from my diet as well.... but trying is the key word.

I did some researching online and found two different chocolate syrup recipes that I could try. I chose one that appeared on two websites (as opposed to the other recipe that was only on one). It came out OK. 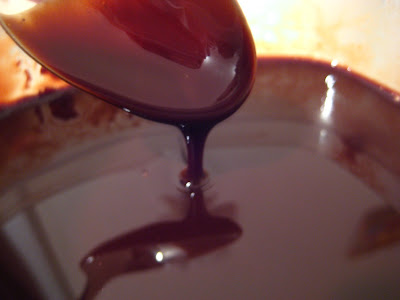 P.S. I found out what happened to my missing vanilla extract. I wasn't losing my mind (only my memory). I had put the new bottle in a different room, away from my baking supplies. I had apparently forgotten to throw the old, empty bottle that was near my baking supplies. So vanilla still cannot magically evaporate and the new bottle is safe and sound now where it belongs.
at 7:02 AM