I think my mom used to say that and I'm not sure exactly why. Heck, I'm not even 100% sure if she was the one who'd say it. I'm pretty sure I wasn't the one considering I hadn't heard the song until tonight when I googled it to make sure that there really was a song called "Nobody knows the Trouble I've seen"

I bring up truffles because I experimented with making them tonight. I was originally going to make chocolate chip cookies, but I grabbed the January/February Fresh magazine from Hannaford and wa-la there were recipes for truffles in there.

I didn't have any amaretto to add, which would have made them delicious. Nor did I have vanilla extract even though I bought a $9 bottle of it in January and used it once. Somehow it evaporated in my 60 degree house? I've never seen vanilla disappear like that. The cap was on tight, there was no spill, and no one bakes in my house but me. Oh well... 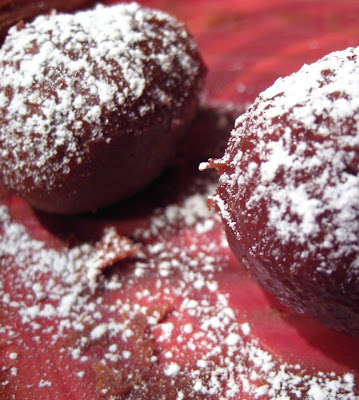 I did have some raspberry extract that I added to one half of the batch. I had bought a bag of Ghirardelli Milk Chocolate Chips to melt. Dark chocolate would have been better, but I didn't want to make a special trip. So instead of running today I made truffles. And believe it or not, I haven't eaten one yet (I did have some of the chocolate that was on my fingers after I made them into balls and that was delicious). 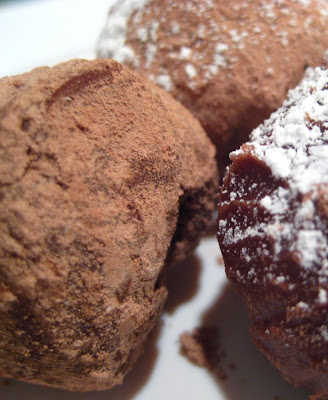 **Update 2.24.09**
I just had three truffles. AMAZING! They are soooo good. I was worried about the cocoa coating because I know in the past I haven't liked it, but it was perfect for these. Even the raspberry extract was a nice touch. The online recipe can be found here at Hannaford's website if you want to try them for yourselves.
at 7:27 PM