We had another birthday at our office last week. Instead of baking a cake, I made trifle, for my boss who loves it, and whoopie pies, because I had been craving them.

I've come to discover that my problem with trying new recipes is actually deciding on which one to try! There internet has an endless supply of them. The one I decided on was from familyfun.com 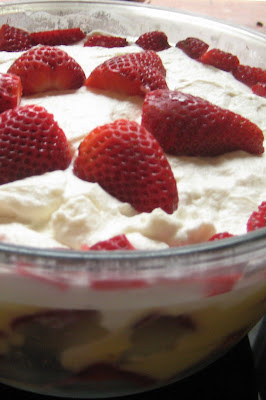 Strawberry Trifle
1 package (3.4oz) instant vanilla pudding
4 cups strawberries (you can use other berries as well)
1/4 cup & 2 tablespoons sugar
2 tablespoons lemon juice
1 cup whipping cream
1 teaspoon vanilla extract
24-36 ladyfingers
1: Prepare the vanilla pudding according to the box. Place in fridge to set
2. Slice the strawberries and toss them with 1/4 cup of sugar and lemon juice. Let this sit for 30 minutes to juice.
3. In a mixing bowl, whip together the whipping cream, vanilla extract, and 2 tablespoons of sugar. Whip until soft peaks form.
4. In a trifle bowl, place ladyfingers as the base later. Add half of the berries, and half of the pudding.
5. Repeat with a second layer of ladyfingers, berries, and pudding. Place a final layer with the lady fingers, and berries. Top this with the whipped cream (not the pudding) and garnish with extra berries.
6. Place in refrigerator until you're ready to dig in! 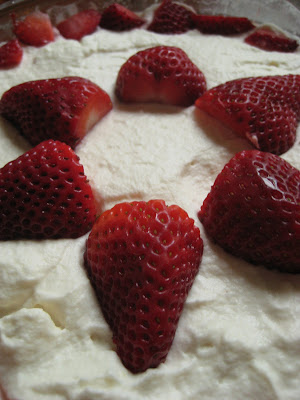 On a side note, the day after I made the trifle I got my new camera in the mail! I bought the Nikon d5000. It's already so much better than my point and shoot camera that I've been using for years. I can't wait to make something else because the photos will look so much better!
at 8:48 AM