Not only was last week the week of moving and unpacking, it was also the first week of training for the NYC Marathon.

I am normally excited to run in a new city since it seems to be the best way to learn your way about, but for some reason I just was not into running here in DC. Perhaps it was knowing that this is where I will be running for years, rather than a few vacation days.

Or perhaps it was the fact that every day I went running it was at least 89 degrees.

As I mentioned earlier, I decided to follow the Hansons' Less is More plan. It wasn't surprising to see that I was not capable of following it very well for the first week. It allows for some flexibility since it is one plan designed for beginning to advanced runners, but my goal is to stick to the advanced runner's schedule, and to run the max mileage for each day. That means six days of running with one speed or strength workout and one long run thrown in there.

Total miles for the week: 22

Monday: Unpacking = Day off. I counted this as my speed workout day considering all of the lifting I was doing and the back and forth trips from the U-Haul to our apartment. Doesn't it work my muscles just as much? I think I was sweating more than I would have in a speed workout. Crazy DC weather....

Tuesday: 4 slow, easy miles to start to figure out the roads around here. It was 96 degrees. I was crazy. There were many stops to figure out which direction was home. A creamsicle and AC were awaiting me when I finished.

The rest of the week called for mileage anywhere from 3-6 miles and a "longer" run on Sunday (4-8 miles). I learned to get up early on Thursday and Friday, getting in 6 miles, and found a route that I seemed to enjoy.

Saturday: Temps reached 105 and although I could have ran in the "cooler" morning, there was a poor air quality alert. No thanks Ozone, I'll see you another day. Instead, we hit up IKEA (my first time ever!) and I was introduced to the their fabulous world of furniture and food. Not only are their furniture and accessories cheap, so is their food. Where else can you get 15 meatballs for $3.99 and ribs for $7.99?! 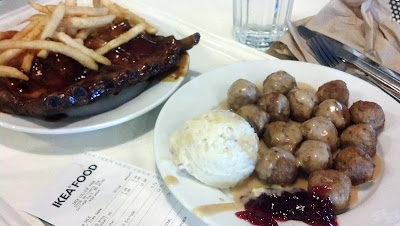 They're certainly NOT the healthiest training food but their marketing throughout the store totally got us.  As did McDonald's (I'm sad to admit). We were the geniuses that decided to go shopping in 105 degree heat without water bottles (say what?!) and were getting delirious on our way home. Drastic times call for drastic measures and we each purchased a large light lemonade at McDonald's for a buck. I find it really sad to say that we each consume all 32 ounces of cold deliciousness that afternoon.

Sunday: Tom and I ran together for 6 miles. I took him on a route I "discovered" thanks to mapmyrun.com. One perk to city running is that there are so many people running that there are plenty of running routes available on that website.

What does Wilson think about all of this moving business? Well, I think he still misses Vermont a little. He laid right on top of the map of the state as soon as I unfolded it. 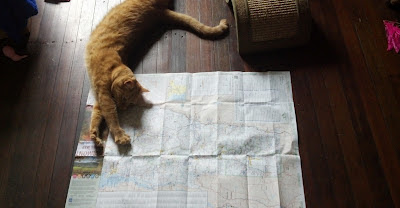 My goals for Week 2 of training:
1. Get in strength training (core or weights) at least twice this week (improvement from zero times)
2. Actually follow week 2's schedule without any excuses.
at 3:02 PM