I apologize to anyone that may have been waiting on my Sunday-night weekly recap post this week. I was in Vermont over the weekend for a funeral, and blogging just wasn't a possibility.

Many of my weekday runs are run at a slower pace than I would like, however, this also means that I am less likely to get injured. On this day, I ran about 3.5 miles with the kiddos at practice, then another 2.5 at home. I was still feeling good, both mentally and physically, thanks in part to the relaxing weekend. This night was the first night that I actually felt cold in DC since moving down earlier this summer. It was a whopping 67 degrees and I had goosebumps by the end of my run!

Tuesday: 6.8 miles at 7:34 pace
Monday's chill was gone and we were left with humidity and rain. Practice was cancelled, and even though I started my run at home, I ended up back at the school because I forgot something in my desk. Oops! It made for a really great tempo run, and also allowed me to kill one of the biggest hills in DC. Ok, maybe not one of the biggest, but it was pretty large. "Coach Dani", aka the voice in my head,  kept yelling at me to attack the hill, run fast, shorten my stride, make sure I was running on my toes. And as that "coach" in me kept yelling, I realized how lucky I am to be a coach. Not only am I helping younger runners, but I can benefit from it as well. I am constantly thinking about my form while running, and even pushing myself to do actual workouts this year.

There was a point in this workout, however, where I felt a twinge of pain in my right hamstring. It wasn't at the end of the workout, but rather in the beginning. It was one of those twinges that make you question whether or not it is smart to be running on it. However, after a few strides it was gone, so I kept running. Another 5 miles. I forgot about the pain as soon as I made it back home.

Wednesday: 3.6 miles at 7:48 pace
This was supposed to be a day off, but the kids had a "longer" run scheduled for the day, which meant that I could get some running in as well! We ran on some back trails, which were super fun. It's so nice to have Rock Creek nearby: it's a mini escape from the city life!

Thursday: 7 miles at 8:08 pace
This was a two part run.
Part 1: Practice. The kiddos ran on the trails as they did a hill workout. It soooo reminded me of high school when we did hills every week! It was during this workout that the entire team learned the importance of making sure you are properly hydrated before a workout. Water water water! Make sure all of you out there are getting enough water in your day!

Part 2: I got home and Tom wanted to join me on a run! We haven't run together in SO LONG! We did a short but quick 20 minute run and ended at a pizza place down the road. For $10 they give you a crispy-crust pizza with your choice of toppings. Can't beat that! The other awesome thing about this particular pizza place is that they sell homemade pasta, pasta sauce, cheese, and a variety of imported items from Italy. I am in love.

Friday: 6.5 miles: tempo turned into slow run.
I was cruising during the first half of this run, hitting nice splits as I made it around the city. My goal was to get in an 8 mile tempo run, but that didn't happen. Around mile 3 I started to feel that twinge in my hamstring from Tuesday. Uh oh.

I had to slow down immediately, and continue to run slower the rest of the run. Every time I landed, I felt the pain in my hamstring. Not horrible, but definitely not just a sore muscle. It was a muscle that was damaged, overworked. The run was cut short, but that was only after I had a chance to make it to  the running store to get some more waffles and ... 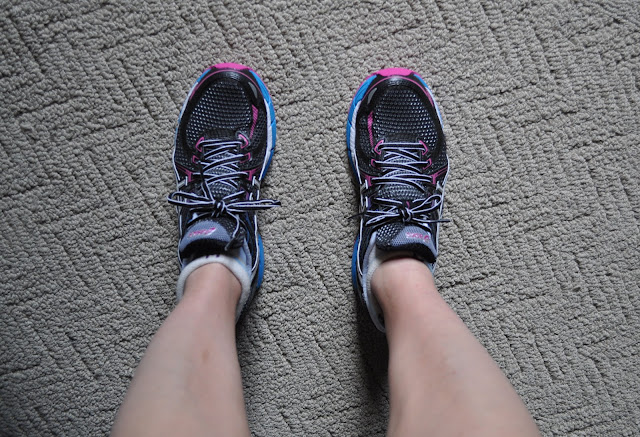 I could not wait to get the new Asics. I have run in the 2100 series for about 7 years, and they just modified the series to now be the GT 2000s. The current, 25 year old version of myself was a little hesitant about the black, but the 6-year old version of myself would have been super excited for these shoes. There was actually a time in my life when I thought it would be cool to have a black house painted with neon pink polka dots. Don't ask me what I was thinking......

I tried the shoes out yesterday (Monday) and loved them. I honestly can't feel the difference between these and the older shoes, but that is a good thing. That means I won't get hurt like I did when I tried to switch to Mizunos.

Random fact: I have bought a new pair of running shoes each time I've gone to VT since we moved down here. I'm thinking that there needs to be more trips so there can be more shoes!!

Saturday: off
Sunday: off

As I mentioned earlier, I spent the weekend in Vermont, and had little time for running. In fact, no time for running. I also left my capris at home in DC so I thought I'd freeze my butt off if I ran in shorts. Apparently I am becoming even more of a temperature wimp than before.


This week
This is my last week of high mileage, and also my last "long" run. I am really loving this training program, especially since I can walk and run the day after the long runs. I can continue to get in good quality workouts throughout the week, and haven't felt running pains like I do in the past.
at 9:28 PM