When we moved to DC a year and a half ago everyone told me that the summers down here were going to be crazy hot. They also said that I would enjoy the winters a little more because they wouldn't be as cold.

And I was silly enough to believe every bit of what they said.

Last Monday it was a beautiful 54 degrees down here (awesome). The next day we got 4 inches of snow, two snow days (from school) in a row, and brutally cold temps in the teens and twenties for the rest of the week. Vermont winter weather found its way down here.

Monday: 6.35 miles at 7:50 pace
We had a mini teaser of spring which made me excited to go on a run for once. I hit up a route I don't often run on and it was full of other runners enjoying the weather. It made me realize how I need to do a run down by the monuments or by Arlington Cemetery at some point. We've been here long enough and I still haven't done it!

Tuesday: 8 mile Tempo at 7:10 pace
I woke up early even though we had a snow day and got outside before the snow actually started falling. It was windy, but I knew that the run needed to be done. The run felt decent and running at this pace doesn't require as much effort as it used to.

I'm supposed to be following the Hanson plan which requires track work on Tuesdays, but I've only done it ONCE during the last 6 weeks. Track work is crucial, even for marathon training. This I do know. But it's the last thing I want to do on a windy, cold day. Therefore, I often tempo it up if I can't do a track workout, and try to throw in a few minutes of harder running here and there.


Thursday: 6 miles at 7:44 pace
Today should have been a tempo day or at least a day filled with more miles. But it was 19 degrees with a windchill making it 5 degrees out. I got home while the sun was still up and didn't waste any time changing into my running clothes. Normally I stay inside when I see temperatures like that but apparently the inner Vermonter wanted a challenge and wanted to go outside. Runs like these make me think I'm really crazy. 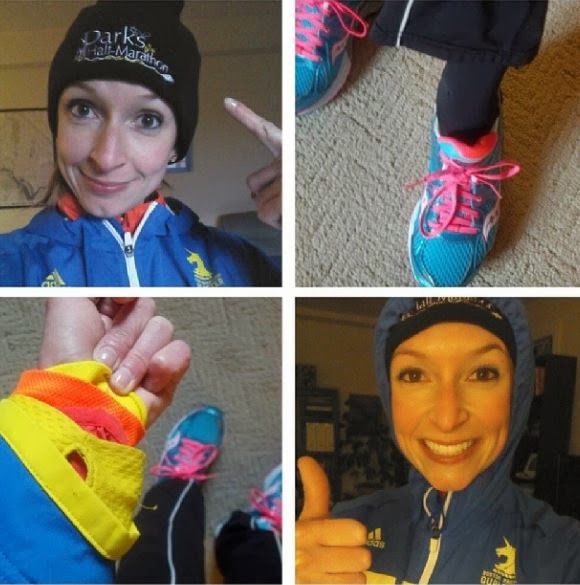 But I discovered the secret to cold-winter running that I had neglected while I've been down here. Dress in layers. Many layers. I had two long sleeve shirts (with wicking fabric) and my two running jackets on. I had spandex on which were covered by another pair of running pants. Sub-20 degree temps are the only time I wear hats, and this time I added the hood of my jacket on top to keep out the wind.

I was toasty. I was comfortable. I didn't mind the cold at all. Dare I say that I had fun out there?! A British woman called me a "hard core runner" as we waited at an intersection. I just call myself crazy. I came home happy to have gotten the miles in, without having to go to the gym, and without complaining to myself like I normally do.

Friday: Off.
A dinner party meant no time for running.
Dinner with awesome co-workers > winter running. By a long shot

Saturday: 8 miles at 7:40 pace
Another cold day (29 degrees). Nothing to report except that a weird leg pain that I've had for 3 weeks was bothering me before the run and didn't seem to get better with the run (like it usually does). My body feels out of whack, like I'm pinching a nerve or something. I've considered going to the docs, but I know that the first question would be, "have you iced?" I think living in my apartment is the equivalent of icing. I'm cold enough without needing an ice pack!

Sunday: 10 miles at 8:02 pace
Weekend running is so much more enjoyable because the sun is up. I also get to procrastinate all day before finally going outside. Felt comfortable on the run but had to keep reminding myself that Sundays are for slow running.

The goal for the coming week is to foam roll every day. Maybe that will help with the leg pain.
The second goal is to do arm workouts on Monday and Wednesday.
Third goal: quit being a baby. Get out and run.
at 4:10 PM