It's been quite chilly the past week, and by chilly I mean often times below zero. So when I stumbled upon a blog post from Lake Champlain Chocolates this week talking about their free hot chocolate tasting at their factory store this Saturday (today), I knew that this would be the perfect thing to do!

Tom and I just barely got back from it and it was amazing! Who wouldn't want free chocolate, especially Hot chocolate when it's only 10 degrees out. We tried all four of their flavors; Traditional, Aztec, Old World, and New World. Both of our favorites was Traditional (I ended up buying a can of it at $9, but well worth it).

The Aztec had hints of cinnamon, the Old World (my second favorite) smelled just like the old fashion Hershey Fudge as it's being boiled, and then the New World was quite powerful in taste. The woman said that it had almost as much chocolate as there was milk and that was quite evident. It was very thick, and very dark. In Spain we would have dipped churros in it. 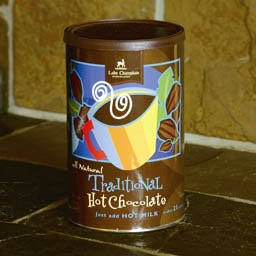 Even though this post isn't about cross stitching, it is about my other, more important love: Chocolate. I highly recommend you all to go out and buy a can of the Traditional Hot Cocoa, heat up some milk, and take a moment of your day for some deliciousness.

So with that said and done, I'll start packing now because Tom and I leave for Washington DC tomorrow morning to witness the inauguration!!!!
at 1:52 PM