Remember on Monday when I said that I didn't have speed workouts for a few more weeks? I found out Tuesday morning that I was quite mistaken. I had a track workout scheduled for Tuesday.

Easy enough - right? Well, not when you were expecting to do easy mileage. The good thing is that they're done and I have a little speed in me. There's no such thing as an easy week when it comes to marathon training.

Brace yourself - I'm about to discuss pizza - yes, again!

We have been talking about going to 2 Amy's for some time now with a friend of ours. We've heard great things about the place and I have run past it quite often. It actually took me a few months to figure out what it was, but even without knowing, I had a feeling that it was good: There always seemed to be people waiting outside of it if I run by in the evening.

On the outside it looks like a small little restaurant, but once inside you discover that there are two downstairs rooms, an outdoor seating area, and an upstairs! We sat upstairs which was quieter and cool - good for a warm DC day.

The restaurant has gone through a certification process to sell some of their pizza's with the "pizza D.O.C" name. This means that the Italian govern recognizes their pizzas as authentic: the pizzas contain authentic ingredients and are baked in a wood oven - the traditional Neapolitan way. We ordered the special for the evening and the margherita pizza, and were encouraged to get an appetizer by the waitress. Apparently two pizzas are not enough to share between three people, so Tom and I opted to split the potato and prosciutto croquettes.

The croquettes were crispy and tasted different than the Spanish versions I'm used to. They had some herbs in them, giving them more flavor. I enjoyed them but prefer the creaminess of Spanish croquettes.

The pizza's, however, were great. 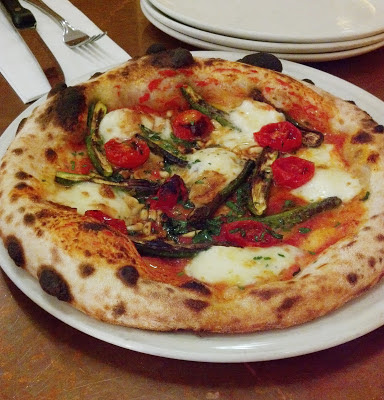 The special had summer squash, tomatoes, pine nuts, and a smoked buffalo mozzarella cheese that was definitely smoked. The pizza was the opposite of District of Pi, and had a much thinner crust. Their margherita pizza was really great and I could have eaten a whole one myself. 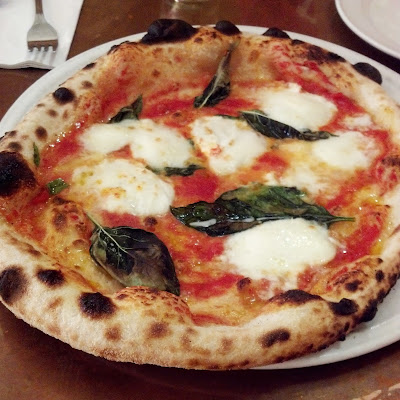 We opted out of dessert because we had blueberry peach pie at home, but it looked sounded tasty. On our way home we passed by the National Cathedral. I have yet to actually visit the place, but it looked stunning at dusk. 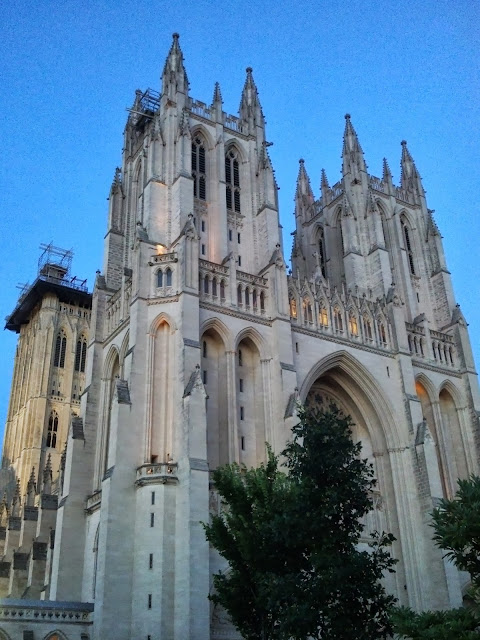 Again - as with my last pizza post -  I am sorry for the crappy cell phone quality photos. I still feel weird about taking photos in a restaurant and try to make it as quick as possible.
at 6:00 AM