Tom and I are back in DC after a really awesome week in Vermont. We kept ourselves busy the entire time and therefore any thing blogging (including reading them) was put aside. We saw lots of family and friends, enjoyed the beautiful outdoors, and continued on with our marathon training.

Monday: 6.21 miles at 7:56 pace
After 2 days of running in VT my legs finally got used to the hills and were no longer sore. I had a shorter, easy run in the morning before meeting up with friends. Tom surprised me with a hot air balloon ride in the evening, along with a little something else. More to come on that later.... 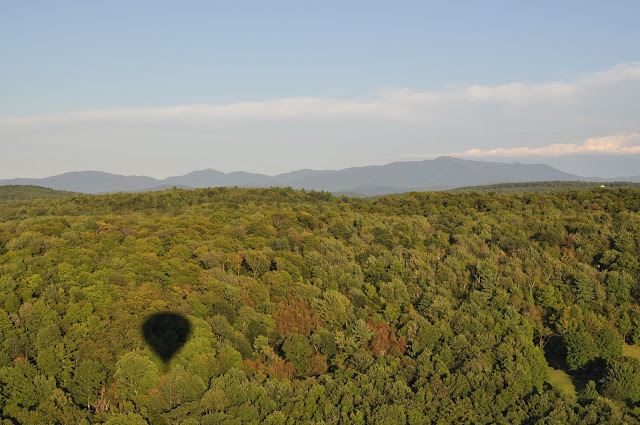 It's great to see improvement on these workouts from week to week. I came through every 800 split at 3:10ish or lower, which is much faster than when I ran the 800 workout a month ago. I was also surprised to see that I still had speed left after the workout when I knocked out the 84 second 400.

Tempo Thursday: 8 miles: 7 mile tempo, 1 mile cool down. Total run at 7:23 pace.
I neglected to do the 1.5 mile warm up and jumped right into the tempo. It was a hilly route but quite beautiful: rolling roads of my hometown, open fields, and cows to say hello to. Yes, I said hello to the cows each morning when I ran by.

Friday: 4.3 mile run at 8:22 pace
We headed into Burlington to run with some ol' college and high school friends. Lots of us had run together at UVM so it felt like a great reunion! I forget how much I enjoy running with people, especially these folks. We ran through some trails in the woods and stopped at a little overlook of Burlington's North end, then headed back for some grilling.

Saturday: 8.1 miles at 7:43 pace
My last day running the foliage route. It was a little foggy when I left the house but it lifted by the end of my run to reveal a beautiful, cloudless sky. It was in the low 60s each morning this week, making the running in VT feel perfect.

Sunday: 14.1 miles at 8:07 pace (slightly off from Garmin after mapping the route post-workout)
Tom and I thought it would be cool to head to the waterfront in Burlington to run along the bike path. I ran along it every day in college and trained for the VCM on it in 2009. This was the first week during this year's training cycle (of the Hansons plan) that my legs felt the way they should at the start of my long run: Dead. They are feeling the effects from the physical training and this is where the real (mental) training comes in. I must train my body and mind to run through the fatigue, which is exactly what I'll encounter during the second half of November's marathon. I definitely felt the pay-off from this type of training last year and know that going through it now will make me stronger in the next few months. 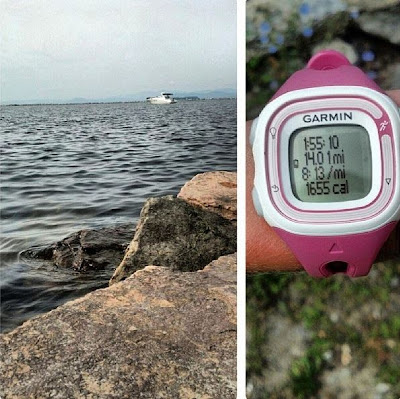 If it weren't for our brunch date with our families after the run, I swear, there is a good chance I would have stopped and dragged the run out longer. I was surprised at how little I wanted to be out there. But I finished, checked out the water, and we headed up to eat at Trader Dukes with the fams.

I am very thankful that we got to spend a week in Vermont, were able to relax, and that we got to catch up with family and friends before the school year begins in two weeks.

Now that we're back in DC, I'm trying to focus on my training as much as I can and trying to get back in the my old eating routine after knocking it out of whack in VT. I still haven't decided if I'll wake up super early to train before school or if I'll run after school, which would mean I'm tired and most likely starving. There are pros and cons to each but I'll get to test out the early morning running next week when we start in service.
at 10:20 AM