After the last two weeks I only have two words: I'm tired.

Monday: 4 miles at 8:02 pace. Arm workout.
Thanks to the holiday I was able to sleep in and run in the morning. The sun made its first appearance in days which meant that I could bust out my new Sauconys and not worry about mud. 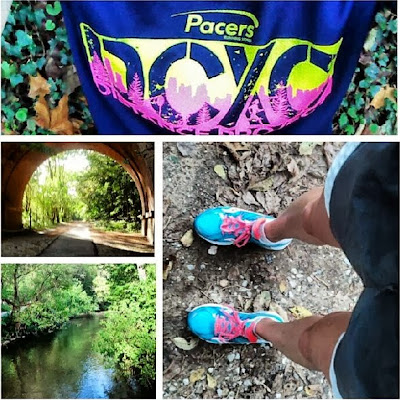 Strength Tuesday: 8 miles at 7:23 pace
0.5 Mile warm up, then 2 x 3 mile repeats at race pace with 1 mile recovery in between, followed by a 0.5 mile cool down. I felt good on this run. Not as great as my last strength workout from last month, but I was happy to be getting in some speed. Many of my runs have been in the dark so it's hard to watch my footing and to still run fast. I also tend to slow up near intersections to make sure all cars can see me so I don't get hit. The 3 mile intervals were definitely speedy, and I ran about 8:00 pace for the recovery.

Thursday XC run: 1.7 miles at 7:32 pace
Ran a few hills to push some of our fastest girls.

Tempo Thursday: 10 miles at 7:36 pace
I was too ambitious in the beginning of the run, especially after a day of teaching and coaching. The first three miles were at 7:00 but I drifted off after. By mile 6 my legs felt like they had run two 5ks. I was tired and my legs were becoming sore. It was also dark and I wanted dinner and to be in bed. But I kept pushing, and thinking about my XC kids. They push themselves each day in practice, even if they don't want to (that's why they have coaches!) so I had to muster up the energy and do as the kids. It was a warm, 70 degree night with a full moon, and I was very thankful to be running in such splendid weather.

Friday: 6.7 miles at 8:13
I woke up more tired than when I went to bed. My body is not recovering the same way it did this summer (thank you school) and I needed more sleep. I ran after school and took it very slow.

Saturday: XC Practice: 5.8 miles at 8:05 pace
We ran to a nearby park and then I did a tempo with a few of the girls. I had visions of practices from college, where I was tailing the girls in front of me, struggling to hold their pace. That's how I felt today. My legs were still recovering from Thursday.

Second run: 4 miles at 8:04 pace
I ran when I got home to get my daily mileage up to 10 miles. My legs started to feel better on the second half of my run, but perhaps that was because I was going down hill for a good portion of it.

The leaves are finally changing colors down here so I headed toward trails rather than one of my regular street-filled routes. The start was chilly but ended up being perfect. 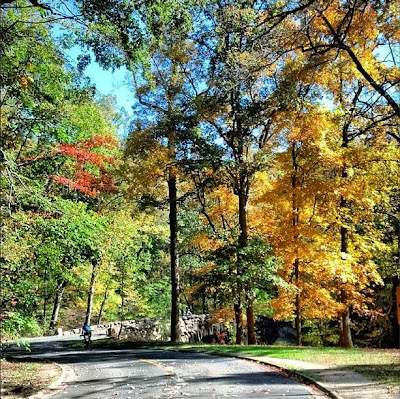 Around mile 7 a man turned around 50 feet in front of me. When I caught up to him he wouldn't let me pass. I was not in the mood to race anyone, but I was also not in the mood to "pretend" to stop and let him go, because I knew that I'd just catch up to him again. He stayed with me for almost a mile. I kept my pace and he would slow down. I'd pass him at my same pace and he'd sprint forward, then slow down, and then I'd catch him. It was a horrible, horrible cycle for 7 minutes. At one point he literally tried to run me off the path but he then decided to stop running. Seriously dude, you look stupid trying to be macho. Advice for any men out there - just let a woman pass you. We won't judge. We'll only judge if you act dumb out there and then we take you. Run your own run. Please. And let me run mine. 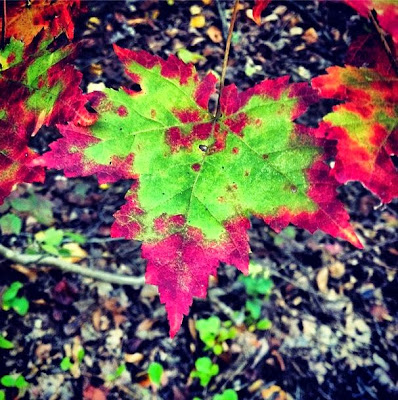 Only two weeks separate me and the NYC Marathon. My first goal these next two weeks are to absolutely get 7-8 hours of sleep a night. Confidence level? A 7 out of 10. It has to be done and I have to force myself to follow through on this. I think I'll have to set an alarm for 9 pm. When the alarm goes off I'll just have to stop what I'm doing and go to bed.

My second goal is to stop eating the crap I'm eating. When our bodies are put through stress (thank you training and teaching) we crave sugary foods. If we cave and eat those sugary foods then we put our body through more stress. This might cause us to sleep poorly, wake up tired, then crave caffeine and sugary foods. It becomes an endless cycle that is hard to break. I've been giving into those cravings too much over the last month and need to stop. I felt ten times better on my runs earlier this school year because I was still eating as healthy as during the summer. I want to, no, NEED to feel that good for NYC.
at 1:48 PM