Rain: It separates the warriors from the weaklings.

That's what I told my XC kids this week when they tried to convince me why they shouldn't have to go running out in the rain for practice. Then I had to remind that to myself when I had to do each of my runs in the rain over the last four days. Right now I'm ready for some sunshine and some dry shoes.

Monday: 4 miles at 8:02 pace. Arm workout.
After the bruised bone diagnosis from the orthopedic and his OK to return to training I hit the roads for a longer-than planned run. My knee felt great and I was happy to be out there once again.

Tuesday: 1.8 miles at XC practice (8:32 pace)
Second run: 6 miles at 7:19 pace. Core Workout
Knowing that I couldn't do a 9 mile speed workout on my second day back I decided to reduce the distance but still keep up the speed. I knew I was taking a risk and that I could have hurt my knee more, but it felt good on the run and after it. I Ran a half mile warm up before a 5 mile tempo run, followed by a half mile cool down. Foam rolling helped to loosen some minor knee pain before and after. I owe a lot to the person that invented the concept of foam rolling.

Wednesday: Day off. 1 mile of start and stop running at practice to time the kids.

Thursday:  1.7 miles at practice (8:09 pace)
Second run: 8 miles at 7:25 pace.
The plan called for a 10 mile tempo run, but I knew I wasn't up to that level after taking last week off. I still did a tempo run but shortened it by 2 miles and left out the warm up and cool down. This was the first day of our rainy-day streak that was to come, so I didn't mind the mist that lasted throughout the run.

Friday: 7 miles at 7:50 pace.
Another rainy day. Got quite wet out there and a little chilly with the colder weather that moved into DC this week.

Saturday: 8 miles at 8:04 pace. Core workout.
Woke up early to get in my own workout before I had to go with the kids to a cross country meet. The rain didn't start until half way through so it was actually a nice and relaxing run. The creek was roaring the whole time with the additional water. The fallen leaves on the wet roads made me think of Vermont.

Few people were out on the normally busy running trails because of the yucky weather and because the park was technically "closed" with the shutdown. Fortunately, I was able to get where I wanted and there was only a half-mile portion of my route that was closed. I should have waited 20 minutes before heading out this morning because those first 20 minuets were spent running in wind and cold rain. After 25 minutes the rain held off and I slowly dried off throughout the rest of my run.

I was a tad worried about my legs on this run since I jumped right back into training this week, but I had strength and energy throughout. Hopefully this will be enough to get me to the finish in three weeks at NYC.

Last Sunday I ordered my second pair of Sauconys. I've been converted from Asics to these fabulous shoes. They came on Wednesday but there was no way they were going to make their debut in the rain. Hopefully the sun comes out tomorrow so I can start to break them in before NYC. 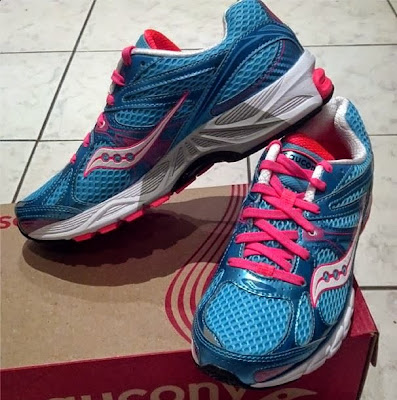 My first race check also came in this week. I'm used to getting medals or gift cards for placing at a race, but I've never actually received money! It was nice to get a $35 check for placing third in the Parks Half. 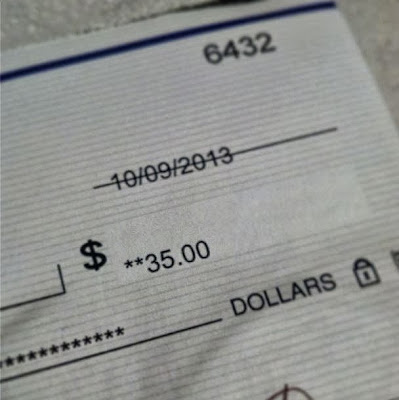 Somehow this cycle of training is quickly winding down. Only three more weeks of training and only one week of actual training before the taper. NYC will be here in no time and my only goal now is to stay healthy, focus on nutrition, and to get more sleep during the school week.
at 12:44 PM