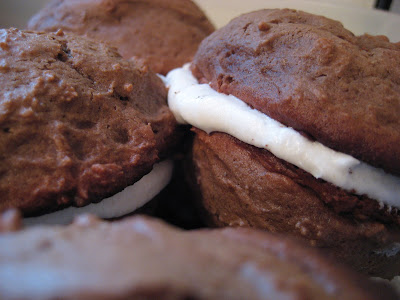 I love whoopie pies. My mom made the absolute, most amazing ones as I was growing up.. She would make them for some of our cross country meets and kids just went crazy over them. They were perfect. Not too chocolaty, the perfect cake-ness where it was soft and not dry, and the right amount of filling in the center.

I've made them myself about 4 times, but for the life of me, they won't come out like hers. She made them so many times that she must have had the recipe in her head, or knew exactly what she needed to add when something didn't go right. She made a note in her recipe once about altering the amount of flour and adding baking powder, but when I asked her what she meant by it and by how much, it was hard to understand her (this was when she had her brain tumor). So I've tried to alter it a little bit each time in hopes of hitting that special combination of ingredients, but still haven't gotten it down.

First time making them, the filling failed on me and I thought something was wrong with the cakes because they didn't seem as brown as I had remembered them. They were a light brown, so I gave up. The second time, the cakes were as flat as a pancake. Third time, they were better, but I didn't have an electric mixer so I couldn't make thick filling. The cakes slid right off when I frosted them and put them together. How disappointing. Finally! Ta dah! Today - I had the mixer and the cakes came out fluffy.

Too fluffy in fact. Now my problem is that they're too dry. I needed to add some water when I added the extra flour. Now I know... But they're still really good! I'm going to bring them to Tom's who can give them to our friend Sarah. She's never been able to experience the joys of a whoopie pie. I was shocked the first time I met someone who had never had one. They were a staple of my childhood. I remember one time we went up to Park-Safari in Canada for vacation and what did my mom bring? Whoopie pies. I seriously had the best mom in the world and I wish she was still around for me to learn from her. It still amazes me how much of an impact someone like her had in my life, even with the smallest of things.

I baked today because the rain came. Gave me a good enough reason to be inside. Yesterday was beautiful - 64 degrees. I took advantage of it and ran 17 miles, 6 of them with Tom. I was exhausted! We ran those 6 miles in 7:20/mile or less, and I didn't drift too far away from that pace when I was on my own.

Last night Jon Stewart came to UVM. It was great. I laughed so hard at some of the stuff that came out of his mouth. He really is an intelligent man. I love comedians because they make you think differently about topics. He made a great point about gay marriage (Vermont legislature is urrently trying to pass a gay marriage bill), in that he said "I don't have a problem with gay marriage - unless it was mandatory." I couldn't agree more. He called our governor a "Shit head" and because of that, I now know how to say "shit head" in sign language because the poor women who were up there signing were questioned many times by Stewart in how to sign specific words. I love him.

So yep, I had a pretty great weekend. It's scary though that I only have a few more of these until I graduate. AHHHH!!!


*** Update on 3.31.2009 ***
I discovered today that the whoopie pies get so much better the day after, even the second day after they're made. I ate 2.5 today because they finally had that moist-ness that I was looking for on Sunday when they were freshly baked. Maybe I won't have to alter my recipe too much, I'll just have to wait until I can eat them
at 3:11 PM