I ran the Vermont City Marathon this morning. It was my second full marathon - first one at the VCM. I ran the half last year and in a relay team the year before, so I was excited to run the whole thing.

Wasn't quite sure how I'd feel out there. About a month ago I took a week off of training because of shin splints, then I had to build back into mileage only to start my taper a week later. Ooops. But it may have been to my favor as I had more rested legs.

It was overcast when I left the apartment to walk to the start. The great thing about living in Burlington is that I was literally a 10 minute walk to the start and I was able to train every day on the marathon route. I ran into my friend Danny, who I ran xc with at UVM a few years ago. It was her first marathon.

I didn't worry about a warm up since I had 26.2 miles ahead of me. Probably a very smart decision. The gun went off at 8:03 am and 4000 of us started the race. In all there were about 8000 runners with the relay teams. It was at this point that the sprinkle that we had been experiencing turned into a light rain, but it was actually very comforting. I went out a bit slow for the first mile and picked it up after.

My first half went super well compared to the half I ran last year. It was great to run through the neighborhoods and feel good. During last year's half I actually stopped and walked for a bit. I ran with Danny for 6 miles but unfortunately she fell behind. Tom was at mile 7 and ran with me for a bit until he got back on his bike and biked all over the route to cheer me on. 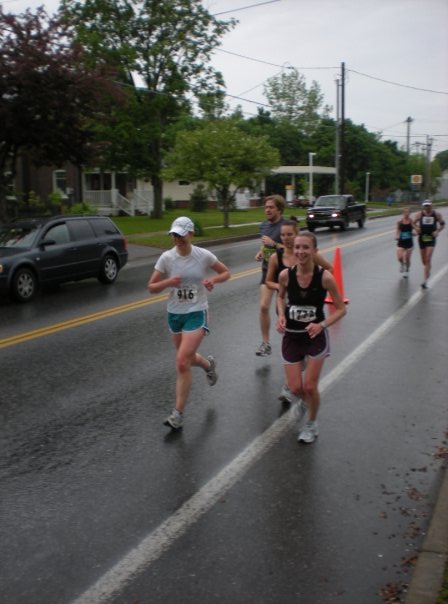 I met up with a woman named Jessica (the woman on the left of me in the photo) and I'd say we ran a good 15 miles together until I fell behind. We both had about the same goal and it was really great to have someone going my pace. When I fell behind a bit I would try to catch right back up with her and she did the same thing if she fell behind. It was cool to have someone there pulling me, and I know I helped her out a bit as well.

There were so many people cheering me on! It was so fun! I realized after the race that the only way I could run that race was to disconnect my mind from my body so that my mind was exploring everything around me instead of feeling whatever was happening in my legs.

This started to fail at mile 18. By mile 22 I started to go a bit slower. I lost about 40 seconds per mile, but since I had been going faster for most of the marathon my time didn't suffer to bad. But my legs just felt like Jell-o and could not be pushed harder even though my breathing was fine.

The finish was weird, not like a cross country finish. I saw people cheering for me but I wanted to get to the end. I had no kick in me, I was just tryinig to hold on and not make it look like I was. It was sweet when they announced my name as I was coming up to the line. I got to finish to the sounds of "Don't Stop Believing" being played.

OH! one more thing! On all of my training runs I'll run up Battery St hill - the dreaded hill of the race. Because of this, I was used to it and wasn't worried like most people. But what was cool about this hill was at the bottom they have Taiko (spelling?) drummers. As I approached them and the hill I got into a zone and imagined my great-great-great(?) grandmother as an indian - and pictured my "indian blood" kicking in. And then at one point the drummers sounded like a part of the Pearl Harbor movie soundtrack. So that hill became my battle. It was my challenge. And because of that, it actually went by super fast. I wasn't even tired at the top of the hill.

The feeling of crossing a line and allowing your legs to walk after 3:22:30 hours of running (yes, that was my time - a 4:27 PR) is so strange. My body didn't know what to do. I walked for about 30 minutes - maybe more, and finally got to my dad's truck where he brought me home. Orginally I was going to take a nice ice bath, but when I started shivering and my lips turned purple, the ice bath turned into a hot bath. My great roommate went out and bought me a gatorade cause go figure - Hannaford didn't have any at the food tent. They only served soda and water...... argh 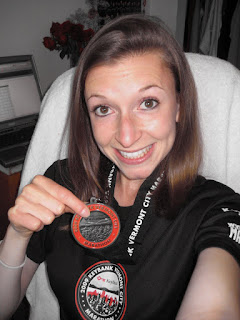 I really did have so much fun and I'm so happy I signed up and that my body made it. My roomates were out there to cheer me, as well as Tom and his parents. I had other great friends along the way that made it such an enjoyable experience. I love the running atmosphere, how people around me were more supportive than competitive. Runners are amazing people and I hope that I'll be running forever so I can be around these people for as long as possible. We truly are a strange breed.

So what's next for me? I have no idea. A 5k in Milton that I'm helping to put on, but I haven't decided what my next challenge will be. It's the second year I've qualified for Boston - so perhaps I'll be heading down there next year. We shall see......
at 3:00 PM