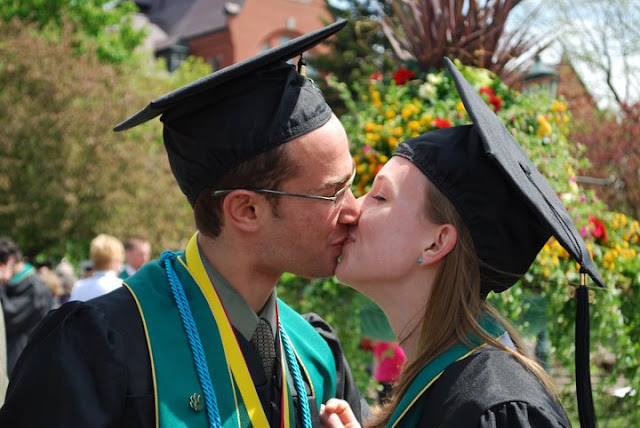 I graduated from UVM on Sunday. It was a beautiful day, cooler in the morning, but warming up some by the time of our graduation. We were able to have the ceremony on the green which was great. Had to line up at 8:00 am, then walked out for commencement around 8:30. Howard Dean gave a speech that was pretty good. He's a very good speaker and knows how to get the crowd going.

After commencement we split up by colleges. I was in the largest college at UVM - the college of Arts & Sciences, so our ceremony was pretty long.

It felt so cool to walk up through campus and onto the road to the green both times that we walked. The first time was especially cool because all of the professors were lined up in their robes along he road. Those things are so cool. I want to get my doctorate just so I can have a giant robe to wear!

The sad part was saying goobdye to some people that I know I'll probably never see again. For instance, one girl, Kate, I met back in my freshmen year. We had calculus together that entire year, and then were back together this last semester for our parasitology class. She was a really fun girl and she came and found me after the ceremony. I realized then how I really should have hung out with her outside of class.

After the ceremony we had a BBQ at Tom's apartment. His whole family came as well as some of mine. It was a lot of fun, but there were so many different groups (families and friends) that it was hard to get around to all of them and spend some time with them. Tom and I went to visit one of his grandfathers later that night because he wasn't able to attend the party. It was good to visit with him again.

I started my job the next day and I feel like that's all I've been doing. I work 8-5 and then come home to run and eat dinner. The last two nights I've been exhausted, but tonight I'm feeling better.

The marathon is only a few days away - four to be exact. I bought new sneakers last night because mine were just shot (even though they had less than 300 miles). The old ones were a cheaper version than I usually get, so perhaps that's why they bothered me so much. It's a risk to run the marathon with new shoes but I'm going to take that risk this weekend.

I'm gonna get going and get to bed before 10. Once I get into the groove of working everyday I'll learn how to partition my time better in the day. But for now, I'm not doing much.
at 9:08 PM