One of my really great friends is going off to law school tomorrow. Tom and I got the chance to see him one last time on Friday. We went putt-putting at Essex Mini Golf and I lost. My score was almost double the winning score. What can I say?

After our grueling game, we headed across the way to Tiny Thai in the Essex Outlets. Their appetizer special was 3 fried frog legs. For some reason I was very excited to try them! When I was younger my mom would surprise my dad by bringing frog legs home for dinner. She worked in the Seafood department at Hannaford and every once in a while would order frog legs for my dad. He'd hang out of his mouth and we'd laugh at him, but we were too grossed out to try them ourselves. 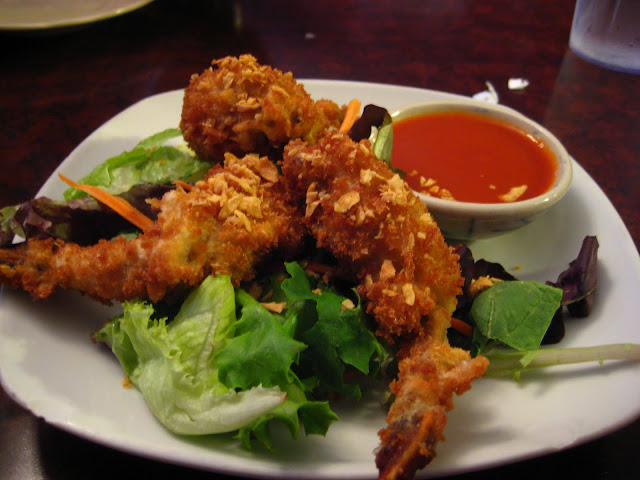 I have to say, they weren't bad. They had their own distinct flavor. The sauce served with the dish was absolutely delicious, especially when combined with the crispiness of the batter. Once the legs were gone, it doubled as a salad dressing! Our waitress, who was around 17, basically told us that she thought we were crazy for trying the legs. She had never tried them, and had no plans to do so.

The rest of the meal was amazing as usual. I ordered the Pong Garee, which was chicken stir-friend with yellow Indian curry powder, egg, onion, mushroom, bell peppers, and scallion. There were too many peppers for my liking, only because I'm not a huge fan of peppers to begin with. I thought that the chicken was cooked very well, and it went amazing with the curry, egg, and rice. I've eaten at Tiny Thai three times and have ordered this dish twice. It easily surpasses anything that I've had at Montpelier's Thai restaurant, The Royal Orchid.
at 9:13 PM