Apricots always remind me of Spain. I'd wake every morning, rush through my shower (because there's only so much warm water), get ready, and then wait. I usually rushed through my routine so quickly that it was too early to go down to breakfast.

I looked forward to breakfast as soon as I finished dinner every night. Maite (the woman who made us breakfast) always knew that it was a mug of warm milk for me and TWO pieces of baguette toast. I was training for a marathon and was hungry! I'd then scoop two scoops of Nesquik into the milk and would spread apricot preserves on top of the toast. I was in heaven as I munched my way through the meal. I always left for classes with very satisfied tastebuds.

I hadn't thought much about apricot preserves over the last three years until my birthday. I had a few moments to enjoy an episode of Giada De Laurentiis' show on Food Network. I had just gotten back from my run -  more specifically, I had just gotten back from climbing out of a snowbank that I had sunk in up to my waist and had a train conductor laugh at me as I tried to free myself from the snow. I imagine I was a sight to see that day.

ANYWAY! Giada made these amazing Apricot Oat Bars and it took all I could to not run out and grab the ingredients I needed to make them. To continue with my (perhaps) new tradition of baking on Wednesday, I got the ingredients last night and made them tonight. They've only been out of the oven for 30 minutes, not the one hour that it says to wait, and I've already busted my way into the pan. 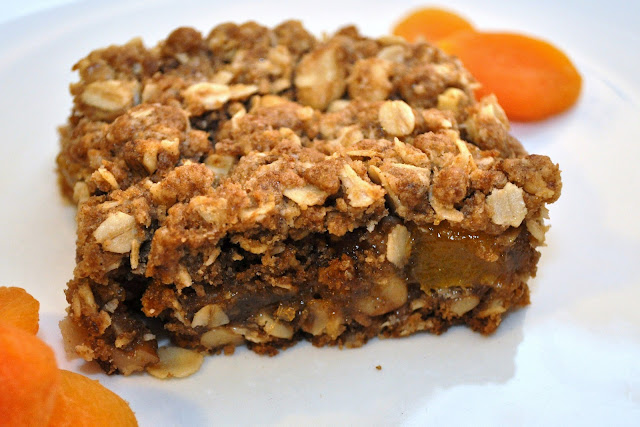 I'm not a fan of oats nor walnuts, but somehow I love the heartiness of the walnuts and oats in this crust. Some people in the reviews suggested more cinnamon but I think there's just enough. I LOVE the sweetness of the apricot in the middle and how it breaks up the bars. I've already gone back for seconds - which I may regret as I try to fall asleep in 20 minutes.... oops!

And on a random note - is anyone else watching American Idol this year? I have to confess that it's one of two shows I'm following regularly now (Top Chef is the other). It's also happens to be Wilson's favorite show. He likes to sit in his chair and watch. It's quite funny to watch a cat watch TV. 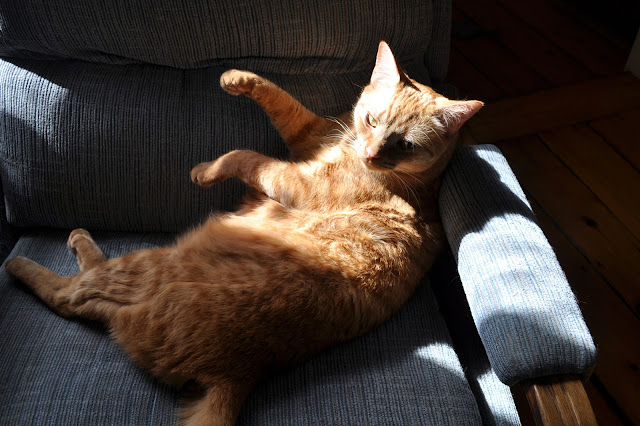 If he's not watching American Idol, he likes to soak up the sun in his recliner
at 10:12 PM