Tom and I flew up to Vermont last weekend to run in the Vermont City Marathon. I have run some part of it since 2007, but it's been about that long since Tom has run in it himself.

We left the warm weather of DC (80s) and stepped off the plane to rain and 40 degree weather in Vermont. Why Vermont? Why?

On Saturday we visited the expo and lucked out with few crowds. Last year was a mess, and we heard that  Friday night was the equivalent of hell. We were able to take our time to check out the booths, and even got to catch up with friends who were picking up their marathon packets. 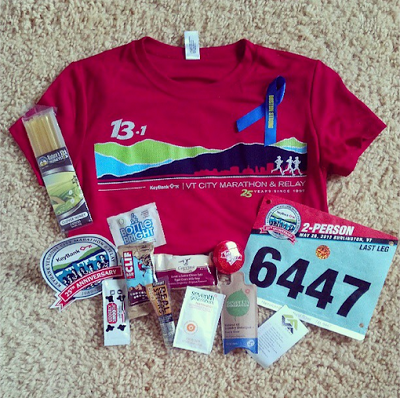 The goodie bag was great this year. I like the new shirt design and all of the Vermonty samples that were inside (including the beef jerky for Tom).

It was still raining on Sunday morning. Needless to say, I was dreading the race and having to be out in the cold for that long. That morning Tom and I decided that I would run the first leg, which I hadn't run since 2010.

I was shivering ferociously at the start, but warmed up once I got running. My goal was to maintain 7 minute pace for as long as I could. I quickly spotted two ladies with Boston shirts and stayed with them for the first 5 miles.

The beltway was a unique experience this year due to the wind, but thankfully I had a bunch of tall guys around me. I scooted in behind them, adjusted to their pace, and used them as a wall against the wind. I felt bad doing it, but seriously, I am 5'4" and they are 6'. Who is going to be a better wall against the wind?

Mile 6 came and it was time to refuel. I tried to take out my GU and failed.

My hands were stuck. I couldn't move them because it was too cold and I hadn't moved them since the start. I dubbed them my "claw hands". It took a mile for me to get them moving again and to be able to reach into my pocket to get the Gu. By that point we got to the 1/2 mile hill up the Beltline. My split slowed more than I wanted it to, to a 7:23.

Running down Church Street for the 2nd time felt wonderful, especially after the hill. I let my legs go, and brought my splits back down. After that, the course took us through some neighborhoods that bring back horrible memories of my first half marathon that I ran in 2008. Back then I went out at the same pace as this one, but was NOT in shape to go out that fast. It was the worst running experience and I had to run and walk for the last 3 miles.

This Sunday, however, I felt really great by that point. In fact, I freaked out a little at mile 11 because I only had 2 miles to go and knew I had more in me. It was wonderful!

And THE WORST cramp of my life hit my side. What does one do when they are 0.2 miles from the finish with a cramp?

They don't walk. That's for sure!

My stomach felt like it was ripping. I pushed on it with my right hand, and was happy to find Tom ready and waiting at the exchange zone. I finished with a new PR, somewhere around a 1:32:35 (AAAHHHH I mistakenly wrote 2:32 before!). It isn't official, but that's what my Garmin said by the time I stopped it. It also says that I ran 13.2 mile, not 13.1. 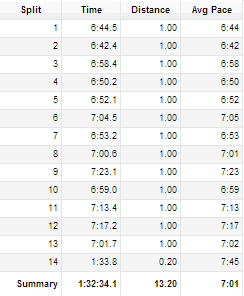 I was happy with my mile average, but want more consistent splits next time. It was a more difficult course than the Nike WMH and has more elevation changes. Perhaps the cold, rainy weather was to the better after all!

Back to the race - Tom flew off. By that point, the rain really seemed to have stopped, but my clothes were all wet. I headed to the finish and was so happy to have the heated bus. It wasn't long before Tom came FLYING down the chute. He ended up finishing his half with a 7 minute PR! I counted a few relay teams ahead of us, and knew we were up there, but wasn't sure our exact standings. It turns out that the Dynamic Shoe-O came in 2nd place for the mixed two person relay teams! We had a finishing time of 2:52. 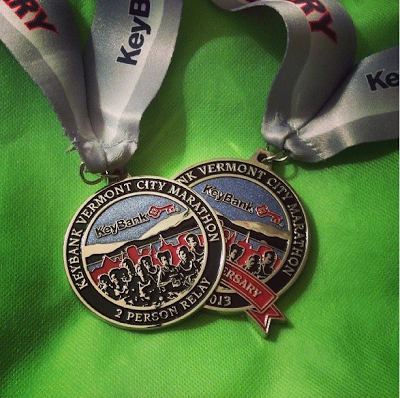 I say it every year, and this year was no different. The finish line food is the best at the VCM: Leonardo's Pizza and Ben & Jerry's. As soon as we had our pizza the sun came out. And the people around us cheered. Not for the runners, but because the sun had returned! 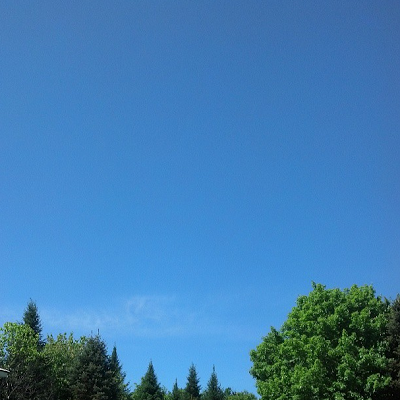 Monday morning: one day after the race. The bluest sky you could ask for!

Random thoughts about the race: